Rubidium atoms are used as a refrigerant for ytterbium atoms 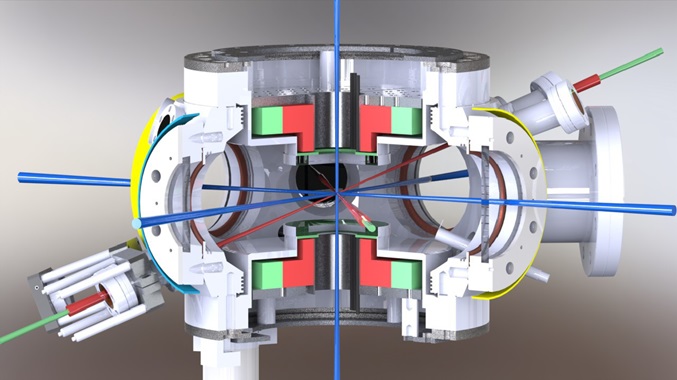 For many years rubidium has been a workhorse in the investigation of ultracold atoms.  Now JQI scientists are using Rb to cool another species, ytterbium, an element prized for its possible use in advanced optical clocks and in studying basic quantum phenomena.   Yb shows itself useful in another way: it comes in numerous available isotopes, some of which are bosonic in nature and some fermionic.

Yb-171 has proven satisfactorily amenable to cooling in the atom trap lab of Steve Rolston and Trey Porto.  First Rb-87 atoms are loaded into a magneto-optic trap---an enclosure where magnetic fields and laser beams are used to confine atoms---and then cooled until they form a Bose-Einstein condensate (BEC).  Slow-moving Yb atoms, in contact with the Rb atoms, are cooled right along with them.  Thus Yb atoms lose excess energy to warming the colder Rb atoms.

In this way Yb atoms can be chilled to a state of quantum degeneracy, a condition in which the Yb atoms in the vapor reach their lowest possible energy configuration.  It’s important to mention here that the Rb atoms are bosons: they can all occupy a single common quantum state, namely the BEC.  The Yb atoms, by contrast, are fermions: quantum interactions preclude their existing side-by-side in a single quantum state.  Instead they must occupy a ladder of energy states, form the lowest level on up.

“Yb atoms have been chilled to a state of quantum degeneracy before by evaporation techniques,” said Varun Vaidya, one of the JQI researchers, “but mostly by way of evaporative cooling, a process that depletes up to 99.9% of the atoms.  Yb-171 atoms, however, cannot be cooled this way since they don’t interact with each other.”

Yb-171 cooling down to degeneracy was achieved in one experiment, Vaidya said, by cooling it with Yb-173 atoms.  But this left a Yb-171 sample of only about a few thousand atoms. In the JQI the complement of Yb-171 atoms remains ample: up to a quarter million atoms.

What can one do with Yb atoms chilled in this way? One thing is to insert them into an optical lattice, a sort of extra constraint inside the atom trap consisting of criss-crossing laser beams. The beams, establishing a pattern of local electric field minima and maxima, hold the atoms in a regular lattice the way eggs are held in a crate.  Then the Yb atoms can then be selectively excited into higher energy states. 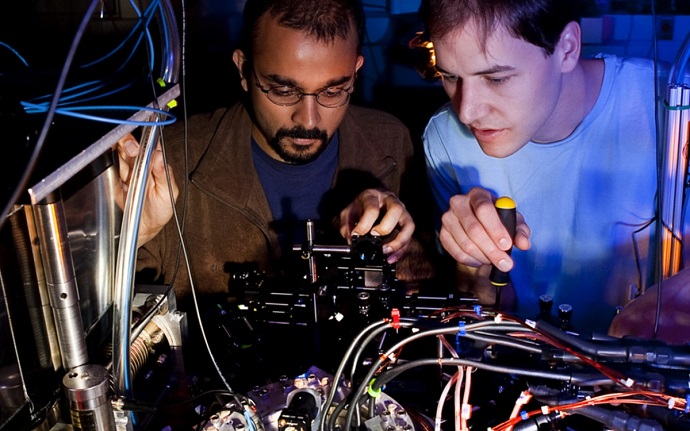 Vaidya, the lead author on a JQI paper published as an "Editor's Suggestion" in a recent issue of Physical Review A, cites two examples of what could come from excited Yb atoms in a lattice.  One would be the creation of  polarons, quasi-particles consisting of a Yb atoms surrounded by several Rb atoms drawn inwards by a weak force called the Van der Waals interaction. Another possibility is that the Yb atoms could be excited to a higher energy level and then quickly stimulated to refund that energy, falling back to their starting state.  The energy refund would come not in the form of a quantum of light (photon) as in a laser, but in the form of a quantum of acoustic energy (a phonon).  Thus you would get a sort of phononic laser.