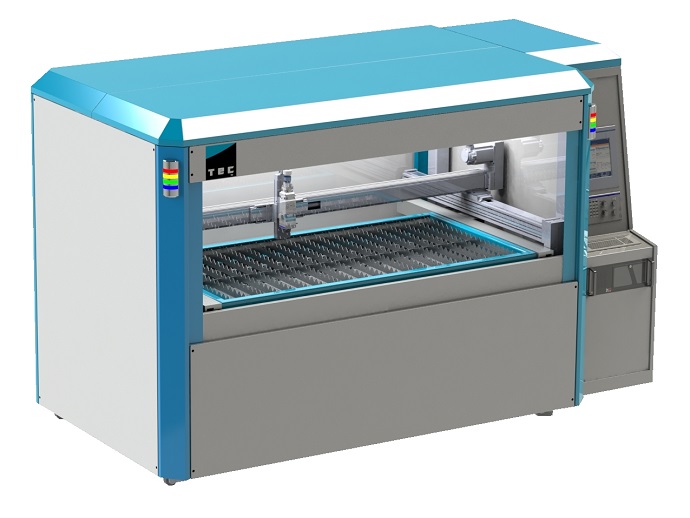 2015 sees the launch of a new model in the Hyperion range of CNC laser machines from Tec Systems Limited ( www.t-e-c-systems.com ). The flatbed laser cutting system is aimed at laser processing of flat sheet metal alloys, and offers a number of benefits in speed and efficiency over other systems on the market.

Tec Systems intends that the sheet metal cutter will provide an advanced alternative to traditional laser cutting machines which use CO2 laser sources. The Hyperion laser cutter is offered with a high power solid state laser achieving several advantages over rival traditional machines. Using a solid state laser, the power of the laser beam is delivered to the workpiece via a flexible fibre optic, avoiding the need for multiple mirrors and beam guides which are used on the CO2 laser system. The design of the Hyperion range including a fibre laser with no internal moving parts achieves exceptional reliability with lower running costs.

Fitted with up to 3 kW of fibre laser power, the new cutting system is more efficient (requiring less cooling water and lower power consumption) to achieve the same cutting speed on sheet metals, in particular it is able to cope well with cutting reflective materials like aluminium and copper without the risk of damaging the laser with back-reflections. For high definition cutting in thinner materials (less than 4 mm) the fibre laser shows a distinct improvement in process speed and cut quality. The heat affected zone is reduced and fine features can be cut without distortion – the system is capable of cutting up to 8 mm thickness of material.

The system is manually loaded by an operator, and parts up to 2 metres wide and 1 metre deep can be profiled on the cutting bed, which also features a Z axis to cope with different thicknesses of sheet – a capacitive height-sensing cutting head ensures that the cut quality is consistent even if the material is not flat. An automatic power-operated door is raised at the end of the cutting cycle, allowing the operator to promptly unload the system.

A 3-axis CNC controller drives the machine and iscapable of importing DXF or any standard format of CAD files to allow the easy preparation of cutting paths. Servo motors and high precision ballscrews are used throughout for a combination of speed, accuracy and reliability with the split axis design resulting in a very compact footprint.

Tec Systems works with all the major laser source manufacturers and can therefore incorporate the laser source of choice to suit customer preference and the specific application.

Tec Systems is an experienced manufacturer of laser processing systems, robotic automation and leak test systems based in the midlands, United Kingdom. Standard and bespoke systems are offered with a full service from design through manufacture, a large installed base worldwide is supported by a dedicated team of engineers.