Surface composition determines temperature and habitability of a planet 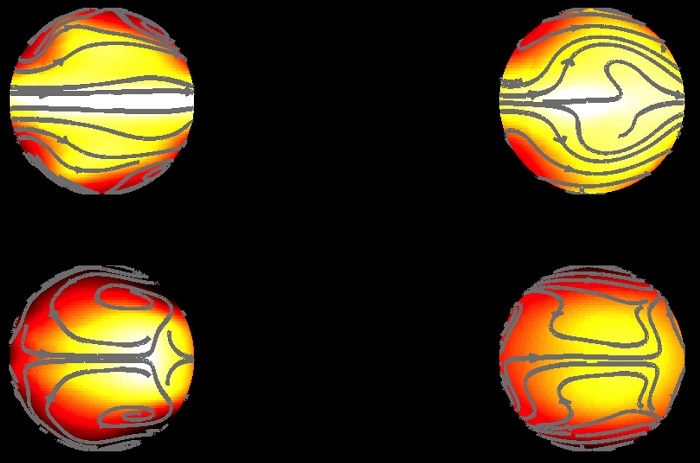 When there is a lot of surface friction, the 'air conditioning' system of a planet cools down its hot day side. |© KU Leuven - Ludmila Carone and Leen Decin

KU Leuven astronomers have shown that the interaction between the surface and the atmosphere of an exoplanet has major consequences for the temperature on the planet. This temperature, in turn, is a crucial element in the quest for habitable planets outside our Solar System.

In the quest for habitable planets outside our Solar System – also known as exoplanets – astronomers are currently focusing on rocky planets that don’t look like Earth. These planets orbit so-called M dwarfs – stars that are smaller than our Sun. In our universe, there are many more M dwarfs than there are sun-like stars, making it more likely that astronomers will discover the first habitable exoplanet around an M dwarf. Most planets orbiting these M dwarfs always face their star with the same side. As a result, they have permanent day and night sides. The day side is too hot to make life possible, while the night side is too cold.

Last year, KU Leuven researchers Ludmila Carone, Professor Rony Keppens, and Professor Leen Decin already showed that planets with permanent day sides may still be habitable depending on their 'air conditioning' system. Two out of three possible ‘air conditioning’ systems on these exoplanets use the cold air of the night side to cool down the day side. And with the right atmosphere and temperature, planets with permanent day and night sides are potentially habitable.

Whether the ‘air conditioning’ system is actually effective depends on the interaction between the surface of the planet and its atmosphere, Ludmila Carone’s new study shows. Carone: “We built hundreds of computer models to examine this interaction. In an ideal situation, the cool air is transported from the night to the day side. On the latter side, the air is gradually heated by the star. This hot air rises to the upper layers of the atmosphere, where it is transported to the night side of the planet again.”

But this is not always the case: on the equator of many of these rocky planets, a strong air current in the upper layers of the atmosphere interferes with the circulation of hot air to the night side. The ‘air conditioning’ system stops working, and the planet becomes uninhabitable because the temperatures are too extreme.

Ludmila Carone: “Our models show that friction between the surface of the planet and the lower layers of the atmosphere can suppress these strong air currents. When there is a lot of surface friction, the ‘air conditioning’ system still works.”

The KU Leuven researchers created models in which the surface-atmosphere interaction on the exoplanet is the same as on Earth, and models in which there is ten times as much interaction as on Earth. In the latter case, the exoplanets had a more habitable climate. If planets with a well-functioning ‘air conditioning’ system also have the right atmosphere composition, there’s a good chance that these exoplanets are habitable. 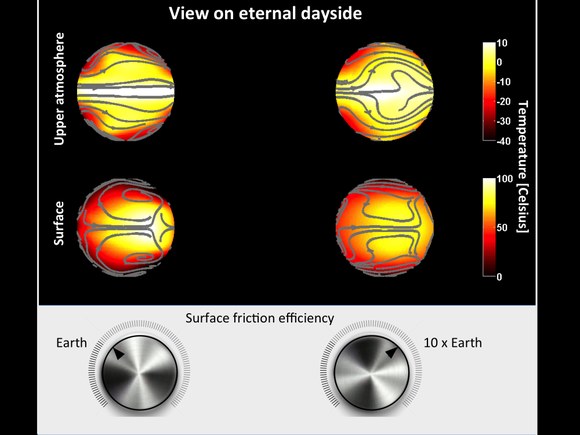 The figures show the wind, temperature, and surface-atmosphere friction on a planet 1.45 times the size of the Earth in a 1-day orbit around an M dwarf. The two topmost figures show the wind and the temperature in the upper layers of the atmosphere. The two figures in the middle show the wind and the temperature on the surface of the planet. On the left-hand figures, the surface-atmosphere friction equals that on Earth. On the right-hand figures, there is ten times as much friction between surface and atmosphere than is the case on Earth. Both scenarios have a different impact on the climate of a planet: the climate represented in the right-hand figures is more habitable.
© KU Leuven - Ludmila Carone and Leen Decin

Click here to read the study in Monthly Notices of the Royal Astronomical Society (MNRAS).