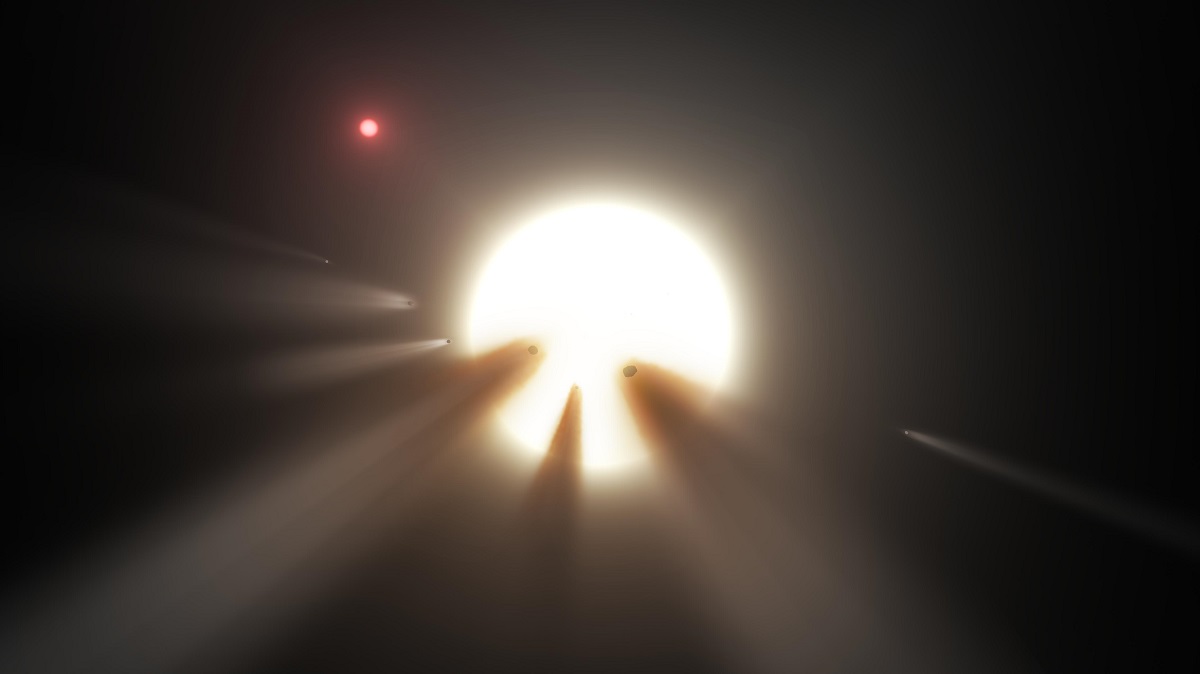 This artist’s conception shows a star behind a shattered comet. One of the theories for KIC 8462852’s unusual dimming is the presence of debris from a collision or breakup of a planet or comet in the star’s system, creating a short-term cloud that blocks some starlight. Image is courtesy of NASA/JPL-Caltech.

Pasadena, CA— A star known by the unassuming name of KIC 8462852 in the constellation Cygnus has been raising eyebrows both in and outside of the scientific community for the past year. In 2015 a team of astronomers announced that the star underwent a series of very brief, non-periodic dimming events while it was being monitored by NASA’s Kepler space telescope, and no one could quite figure out what caused them. A new study from Carnegie’s Josh Simon and Caltech’s Ben Montet has deepened the mystery.

Simon and Montet’s findings caused a stir in August, when they were posted on a preprint server while their paper was being reviewed. Now their work is now accepted for publication by The Astrophysical Journal.

The researchers analyzed further Kepler observations of the puzzling star and showed that in addition to its rapid unexplained brightness changes, the star also faded slowly and steadily during the four years it was watched by Kepler.

Speculation to explain KIC 8462852’s dips in brightness has ranged from an unusually large group of comets orbiting the star to an alien megastructure. In general, stars can appear to dim because a solid object like a planet or a cloud of dust and gas passes between it and the observer, eclipsing and effectively dimming its brightness for a time.  But the erratic pattern of abrupt fading and re-brightening in KIC 8462852 is unlike that seen for any other star.

Spurred by a controversial claim that the star’s brightness gradually decreased by 14 percent from 1890 to 1989, Montet and Simon decided to investigate its behavior in a series of Kepler calibration images that had not previously been used for scientific measurements.

“We thought that these data could confirm or refute the star’s long-term fading, and hopefully clarify what was causing the extraordinary dimming events observed in KIC 8462852,” explained Simon.

Simon and Montet found that, over the first three years of the Kepler mission, KIC 8462852 dimmed by almost 1 percent. Its brightness then dropped by an extraordinary 2 percent over just six months, remaining at about that level for the final six months of the mission.

The pair then compared this with more than 500 similar stars observed by Kepler and found thata small fraction of them showed fading similar to that seen in KIC 8462852 over the first three years of Kepler images. However, none exhibited such a dramatic dimming in just six months, or a total change in brightness of 3 percent. 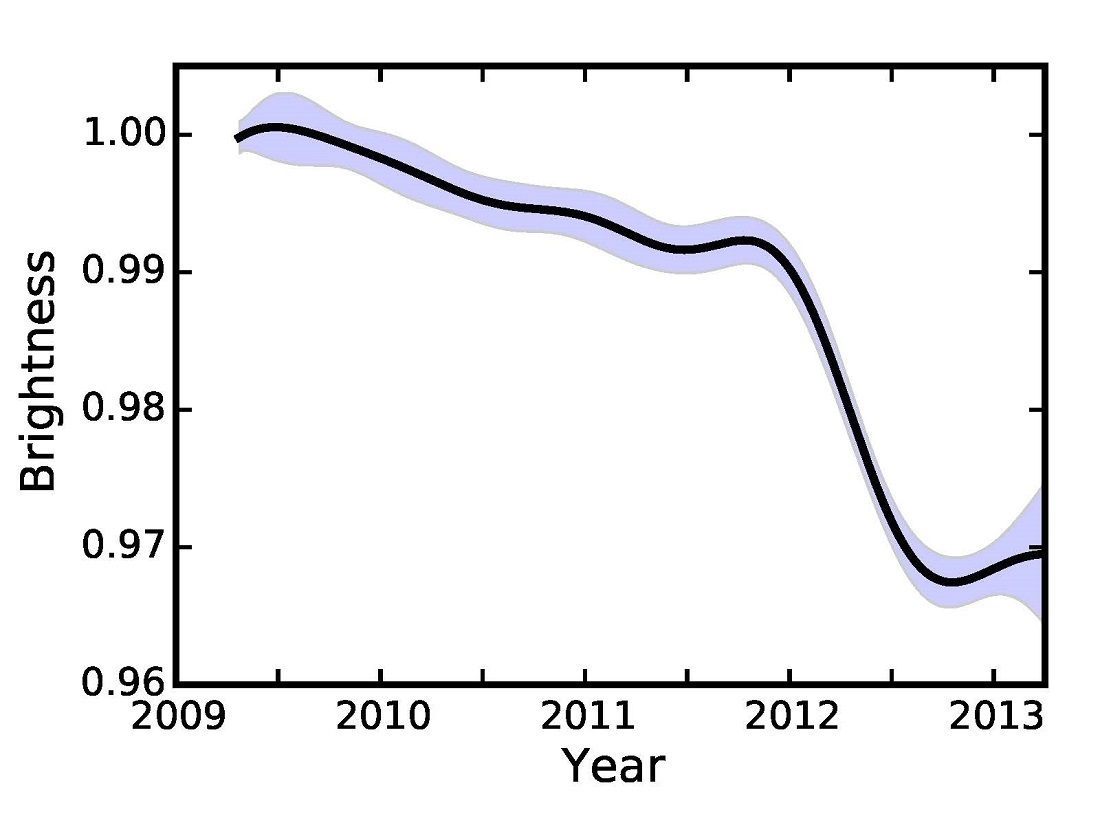 “The steady brightness change in KIC 8462852 is pretty astounding,” said Montet. “Our highly accurate measurements over four years demonstrate that the star really is getting fainter with time.  It is unprecedented for this type of star to slowly fade for years, and we don’t see anything else like it in the Kepler data.”

“This star was already completely unique because of its sporadic dimming episodes. But now we see that it has other features that are just as strange, both slowly dimming for almost three years and then suddenly getting fainter much more rapidly,” Simon added.

Astronomers were already running short of good ideas to account for the dips in KIC 8462852’s brightness, and the new results will make that task even harder. Simon and Montet think that the best proposal so far for explaining the star’s drastic six month dimming might be a collision or breakup of a planet or comet in the star’s system, creating a short-term cloud of dust and debris that blocks some starlight. However, this wouldn’t explain the longer-term dimming observed during the first three years of Kepler and suggested by measurements of the star dating back to the nineteenth century.

“It’s a big challenge to come up with a good explanation for a star doing three different things that have never been seen before,” Montet said.  “But these observations will provide an important clue to solving the mystery of KIC 8462852.”