Cosmic Horseshoe Is Not a Lucky Beacon 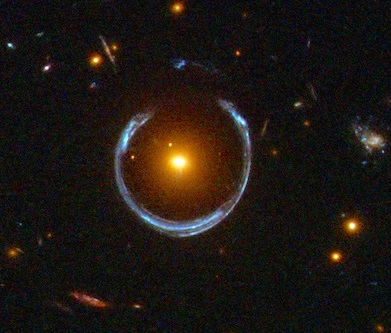 RIVERSIDE, Calif. (www.ucr.edu) — A billion years after the big bang, nearly all of the atoms were destroyed (ionized), but astronomers don’t understand what caused it. They assume that nascent galaxies emitted ultraviolet light energetic enough to ionize all of the atoms.

However, astronomers don’t fully understand the escape rate of ionizing photons from early galaxies. That escape rate is a crucial, but still a poorly constrained value, meaning there are a wide range of upper and lower limits in the models developed by astronomers.

That limitation is in part due to the fact that astronomers have been limited to indirect methods of observation of ionizing photons, meaning they may only see a few pixels of the object and then make assumptions about unseen aspects. Direct detection, or directly observing an object such as a galaxy with a telescope, would provide a much better estimate of their escape rate.

In a just-published paper, a team of researchers, led by a University of California, Riverside graduate student, used a direct detection method and found the previously used constraints have been overestimated by five times.

“This finding opens questions on whether galaxies alone are responsible for the reionization of the universe or if faint dwarf galaxies beyond our current detection limits have higher escape fractions to explain radiation budget necessary for the reionization of the universe,” said Kaveh Vasei, the graduate student who is the lead author of the study.

It is difficult to understand the properties of the early universe in large part because this was more than 12 billion year ago. It is known that around 380,000 years after the Big Bang, electrons and protons bound together to form hydrogen atoms for the first time. They make up more than 90 percent of the atoms in the universe, and can very efficiently absorb high energy photons and become ionized.

However, there were very few sources to ionize these atoms in the early universe. One billion years after the Big Bang, the material between the galaxies was reionized and became more transparent. The main energy source of the reionization is widely believed to be massive stars formed within early galaxies. These stars had a short lifespan and were usually born in the midst of dense gas clouds, which made it very hard for ionizing photons to escape their host galaxies.

Previous studies suggested that about 20 percent of these ionizing photons need to escape the dense gas environment of their host galaxies to significantly contribute to the reionization of the material between galaxies.

Unfortunately, a direct detection of these ionizing photons is very challenging and previous efforts have not been very successful. Therefore, the mechanisms leading to their escape are poorly understood.

This has led many astrophysicists to use indirect methods to estimate the fraction of ionizing photons that escape the galaxies. In one popular method, the gas is assumed to have a “picket fence” distribution, where the space within galaxies is assumed to be composed of either regions of very little gas, which are transparent to ionizing light, or regions of dense gas, which are opaque. Researchers can determine the fraction of each of these regions by studying the light (spectra) emerging from the galaxies.

In this new UC Riverside-led study, astronomers directly measured the fraction of ionizing photons escaping from the Cosmic Horseshoe, a distant galaxy that is gravitationally lensed. Gravitational lensing is the deformation and amplification of a background object by the curving of space and time due to the mass of a foreground galaxy. The details of the galaxy in the background are therefore magnified, allowing researchers to study its light and physical properties more clearly.

Based on the picket fence model, an escape fraction of 40 percent for ionizing photons from the Horseshoe was expected. Therefore, the Horseshoe represented an ideal opportunity to get for the first time a clear, resolved image of leaking ionizing photons to help understand the mechanisms by which they escape their host galaxies.

The research team obtained a deep image of the Horseshoe with the Hubble Space Telescope in an ultraviolet filter, enabling them to directly detect escaping ionizing photons. Surprisingly, the image did not detect ionizing photons coming from the Horseshoe. This team constrained the fraction of escaping photons to be less than 8 percent, five times smaller than what had been inferred by indirect methods widely used by astronomers.

“The study concludes that the previously determined fraction of escaping ionizing radiation of galaxies, as estimated by the most popular indirect method, is likely overestimated in many galaxies,” said Brian Siana, co-author of the research paper and an assistant professor at UC Riverside. “The team is now focusing on direct determination the fraction of escaping ionizing photons that do not rely on indirect estimates.”

Mario De Leo Winkler, a postdoctoral researcher in the UCR Department of Physics and Astronomy, made significant contributions to this article.