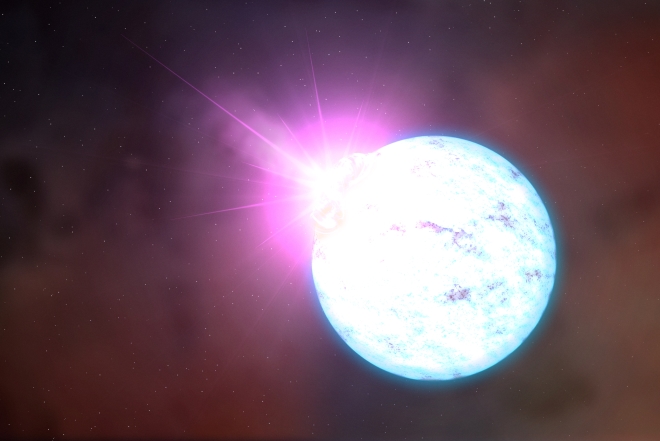 University of Leicester astronomers have contributed to an international discovery of a new phenomenon on a neutron star – one of the densest objects in the universe.

Using observations by NASA's Swift satellite, an international team of astronomers has identified an abrupt slowdown in the rotation of a neutron star.

The discovery holds important clues for understanding some of the densest matter in the universe.

Astronomers have witnessed hundreds of events, called “glitches”, associated with sudden increases in the spin of neutron stars – but this is the first time a sudden spin-down has been observed.

The team have dubbed the phenomenon an “anti-glitch”.

A neutron star is the crushed core of a massive star that ran out of fuel, collapsed under its own weight, and exploded as a supernova. It's the closest thing to a black hole that astronomers can observe directly, compressing half a million times Earth's mass into a ball 10 to 20km across - roughly the size of Leicester.

Matter within a neutron star is so dense that a teaspoonful would weigh about a billion tons on Earth.

Neutron stars possess two other important traits. They spin rapidly, reaching speeds up to 43,000 rpm, comparable to the blades of a kitchen blender, and they boast magnetic fields a trillion times stronger than Earth's.

From July 2011 to mid-April 2012, the team observed regular X-ray pulses from a magnetar designated 1E 2259+586. The object spins once every 7 seconds or about 8 rpm, and observations indicated that it was slowing down at a gradual and stable rate.

But data acquired at the next scheduled observation, on April 28, showed the star's spin had abruptly slowed by 2.2 millionths of a second, or about one-third of a part per million. In addition, the magnetar was found to be spinning down at a much faster pace.

A report on the findings appears in the May 30 edition of the journal Nature.

The Space Research Centre, based in the University of Leicester’s Department of Physics and Astronomy, was responsible for building the X-ray camera onboard the Swift satellite, which has now been operating successfully since it was launched 8.5 years ago.

As builders of the instrument, the Swift team at Leicester is responsible for ensuring the X-ray CCD detector is well calibrated and its performance is understood.

Collaborator Dr Andrew Beardmore, of the University of Leicester’s Department of Physics and Astronomy, said: “The study is important as it provides insights into what is happening inside the exotic interior of a neutron star.

“As such their interiors are formed under extreme densities, pressures and, in this case, magnetic fields. The ‘anti-glitch’ observed in this one - which is the first time such an event has been convincingly seen - will help refine models of their interiors.”

On April 21, just a week before the Swift observation that identified the anti-glitch, the star produced a brief but intense X-ray burst detected by the Gamma-ray Burst Monitor aboard NASA's Fermi Gamma-ray Space Telescope. The scientists think this 36-millisecond eruption of high-energy light likely signalled the changes that drove the magnetar's slowdown.

The discovery has important implications for understanding the extreme physical conditions present within neutron stars, where matter becomes squeezed to densities several times greater than an atomic nucleus. No laboratory on Earth can reach these conditions.

While the internal structure of neutron stars is a long-standing puzzle, current theories envision a crust of electrons and ions above an interior containing, among other oddities, a neutron superfluid, which is a bizarre, friction-free state of matter.

Because the surface of a neutron star accelerates streams of high-energy particles through its intense magnetic field, the crust is always losing energy and slowing down. The fluid interior of the neutron star resists being slowed, so the crust may fracture under the strain, producing an X-ray outburst while also receiving a speedup kick from the faster-spinning interior.

"Astronomers have witnessed hundreds of events, called glitches, associated with sudden increases in the spin of neutron stars, but this sudden spin-down caught us off guard," said Victoria Kaspi, a professor of physics at McGill University in Montreal.

"We've dubbed this event an 'anti-glitch' because it affected the magnetar in exactly the opposite manner of every other clearly identified glitch seen in neutron stars," said co-author Neil Gehrels, the lead researcher on the Swift mission, at NASA's Goddard Space Flight Center in Greenbelt, Md.

"What is really remarkable about this event is the combination of the magnetar's abrupt slowdown, the X-ray outburst, and the fact that we now observe the star spinning down at a faster rate than before," said Robert Archibald, a graduate student at McGill and the paper's lead author.

Some properties of conventional glitches have proven puzzling, the researchers note, and they express the hope that the discovery of the anti-glitch phenomenon will initiate renewed progress in understanding neutron star interiors.

This goal is also the main focus of a new NASA mission recently selected for launch in 2017. The Neutron-star Interior Composition Explorer, or NICER, will be mounted on the International Space Station to search for X-ray outbursts, glitches, anti-glitches and other phenomena that will help theorists produce better models of the exotic interiors of neutron stars. Kaspi is a member of the NICER science team.

Discovered in 1981 by NASA's Einstein satellite, 1E 2259+586 lies about 10,000 light-years away toward the constellation Cassiopeia. The Swift monitoring studies continue a similar program performed by NASA's Rossi X-ray Timing Explorer, which kept an eye on the magnetar for 16 years before being decommissioned in early 2012.

The Swift mission is managed by NASA Goddard. It was built and is being operated in collaboration with Penn State, the Los Alamos National Laboratory, and General Dynamics in the U.S.; the University of Leicester and Mullard Space Sciences Laboratory in the United Kingdom; Brera Observatory and the Italian Space Agency in Italy; plus partners in Germany and Japan.

For images related to this release, please visit: http://www.nasa.gov/mission_pages/swift/bursts/new-phenom.html