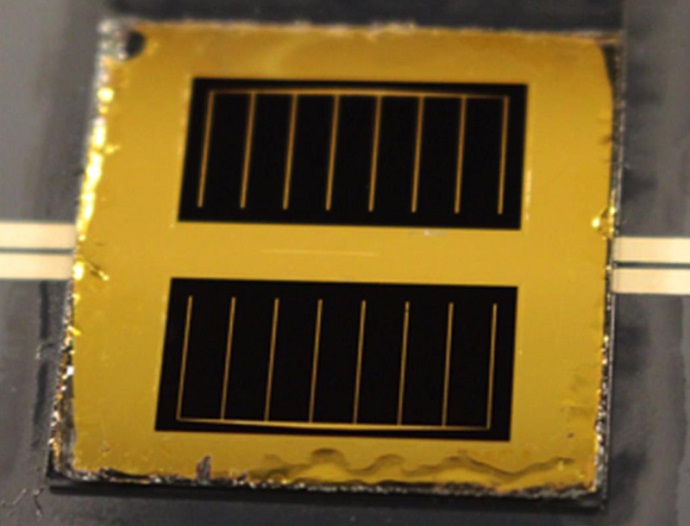 GaInP/SHJ tandem cells with efficiency up to 29.8% under 1-sun standard illumination.

The newly certified record conversion efficiency of 29.8 percent was set using a top cell made of gallium indium phosphide developed by NREL, and a bottom cell made of crystalline silicon developed by CSEM using silicon heterojunction technology. The two cells were made separately and then stacked by NREL researchers. The NREL-CSEM record was published in the November 2015 version of "Solar cell efficiency tables."

"It’s a record within this mechanically stacked category," said David Young, a senior researcher at NREL. "The performance of the dual-junction device exceeded the theoretical limit of 29.4 percent for crystalline silicon solar cells."

Young is co-author of a paper, "Realization of GaInP/Si dual-junction solar cells with 29.8 percent one-sun efficiency," which details the steps taken to break the previous record. The paper has been submitted for publication in the IEEE Journal of Photovoltaics.

A co-author of the paper, NREL’s Stephanie Essig, attracted interest from CSEM when she presented a another paper, “Progress Towards a 30 percent Efficient GaInP/Si Tandem Solar Cell,” to the 5th International Conference on Silicon Photovoltaics in Germany in March.

"We believe that the silicon heterojunction technology is today the most efficient silicon technology for application in tandem solar cells" said Christophe Ballif, head of PV activities at CSEM.

"CSEM partnered with the NREL scientists with the objective to demonstrate that 30 percent efficient tandem cells can be realized using silicon heterojunction bottom cells, thanks to the combination with high performance top cells such as those developed by NREL," said Matthieu Despeisse, the manager of crystalline silicon activities at CSEM.

A new design for the dual-junction solar cell and contributions from CSEM were key to setting the record. These first collaboration results further indicate that even greater efficiency can be achieved by the combination of NREL and CSEM cells.

The funding for the research came from the Office of Energy Efficiency and Renewable Energy SunShot Initiative, as well as from the Swiss Confederation and the Nano-Tera program.