Frontside of a conventional solar cell with contacts. Photos: University of Stuttgart/ipv

With 8 to 10 Cents per kilowatt hour, the production cost of photovoltaic electricity in Germany ranges below electricity cost from gas-fired or coal-fired power plants. Photovoltaic electricity will be even cheaper for high efficient solar cells and modules manufactured by laser techniques. One year ago, scientists from the Institute for Photovoltaics (ipv) of the University of Stuttgart demonstrated 22 % efficiency by fabricating back-contacted solar cells by laser processes. This world record efficiency was obtained on small 20 mm x 20 mm large cells. In a new project, financed by the German Federal Ministry of Economic affairs and Energy, the ipv will now scale up all their processes to industrial cells of 125 mm x 125 mm area with 22 % efficiency.

Standard silicon solar cells feature silver based front side contacts which shadow parts of the cell. Under the metallic contacts no radiation will reach the cell, no electrons will be generated; thus, the efficiency is considerably reduced. In case of back contacted solar cells, as the name implies, all contacts are located on the backside. The front side rests bare and without hindrance for energy production. However, conventional back contact cells suffer from high production cost: Fine structures and tedious work is required to supply many doped areas and contacts on the backside. In standard silicon solar cells between the front and the back, two differently doped areas induce an electric field, the so-called large area pn-junction. Usually the doping is done by a single large-area diffusion of impurity atoms, like boron or phosphor, in silicon at high temperatures. Back contacted solar cells, instead, need a lot but tiny pn-junctions on the backside. Thus, complex and expensive masking steps are necessary in cell processing. 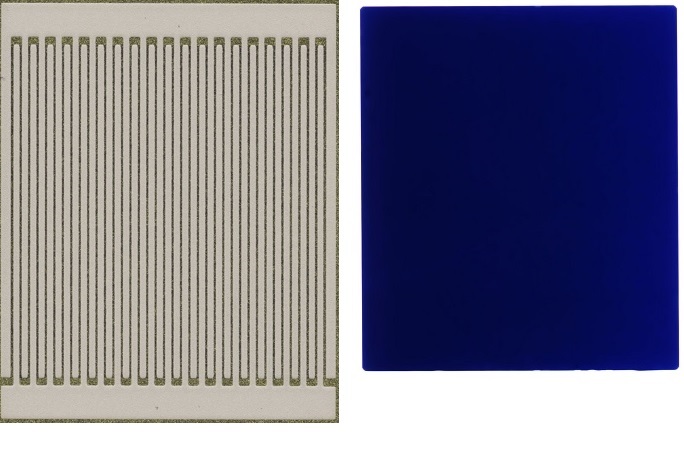 Front- and backside of a back contacted solar cell – all contacts are placed on the back side.

To solve this problem, researchers of the ipv developed laser processes for the production of back contacted solar cells without any masking. Lasers allow to locally structure and contact the doped areas with a resolution of less than a three-hundredth millimeter. Compared to other processes for back contact solar cells, the laser-process at ipv is fast, simple, and cost-efficient but yields highly efficient cells. Therefore, this project is able to contribute to a restart of the German photovoltaic (PV) industry: Large-area PV modules with efficiencies above 20 % will be produced at costs below 50 Cent per Watt. Such German high tech modules, produced under German standards, are able to compete with the much lower efficient modules produced in Far East - highly subsidized and manufactured under low social and environmental standards.