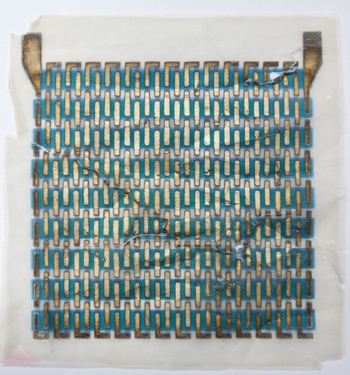 Weaving in and out of the stripes of dye in this solar cell are metallic threads, printed onto a square of tracing paper that fits in the palm of one hand.

UW-Madison researchers working at the intersection of basic and applied science focus on key factors like cost, environmental impacts ... and sometimes, color.

"It turns out that the same fundamental properties that give dye molecules their color also allow them to conduct electricity and generate power," says Andrew, whose research earned her a spot on the 2012 Forbes "30 Under 30 in Energy" list. "I want to take car paints and make them into solar cells."

Andrew and her colleagues are working with a common material that is at the center of a global industry even larger than that of silicon, the primary material used to make solar cells and most electronics today. The organic, or carbon-containing, compound is a dye called copper phthalocyanine.

"If you have blue anything — blue plastic, a blue car, blue clothes — it comes from copper phthalocyanine," says Andrew.

Today, the commercial silicon-based solar cells we see on rooftops are manufactured on glass plates, and they absorb the sun's energy and convert it into electricity with about 12 percent efficiency. While silicon is a plentiful resource, it takes a lot of energy to process and requires valuable silver conductors to create a functioning solar cell. These technical issues tend to keep prices high. Yet, consumer interest in solar energy has increased to the point where IKEAs in Great Britain plan to sell solar panels alongside home decor. Grist reports that one of the simpler systems would cost over $9,000.

That's why Andrew and her team are interested in developing new solar cell technologies that will instead use dyes containing carbon — the most abundant element on earth — and aluminum. Rather than requiring a glass base, the organic dyes Andrew uses can be laid down on material as light and inexpensive as paper.

"I believe these are contenders for next-generation solar cells because we can make them lightweight and ultraportable, and since the starting materials are so cheap, they're essentially disposable," says Andrew.

"The cool thing about organic solar cells is that you can make very thin films out of them because they're brightly colored, due to the fact that the dye absorbs a lot of light. In fact, organic dyes absorb the most light out of any material out there."

Andrew demonstrates by pulling out a demo solar cell, which has been created using copper phthalocyanine and a small amount of the same red pigment used to make "Ferrari Red" car paint. Weaving in and out of the stripes of dye are metallic threads, and the whole business is literally printed onto a square of tracing paper that fits in the palm of one hand.

Because the dyes are so intense, layers only need to be about 50 nanometers thick to absorb enough light to power a solar cell. In contrast, a human hair is about 1,000 nanometers thick. Andrew's hope is that once they have been optimized, the energy technologies coming out of her lab will be efficient and affordable enough to power consumer electronics ranging from rooftop solar panels and alarm clocks to cell phone chargers and coffeemakers.

Andrew says opportunities for collaboration at UW-Madison provide unique benefits for her research. She is currently working with  Materials Research Science and Engineering Center (MRSEC) researchers and UW energy experts Robert Hamers, Michael Arnold and Paul Evans on fundamental studies of how solar energy can be absorbed, emitted and harvested more efficiently. The UW's status as a leader in energy storage research also creates synergy with Andrew's work.

"In my lab, we're collecting solar energy and trying to transform it into energy we can use," she says.

"I work on the harvesting energy part, and there's a plethora of researchers here who can tell me how to store it once I collect it."