A new study by Stanford scientists overturns a widely held explanation for how organic photovoltaics turn sunlight into electricity. 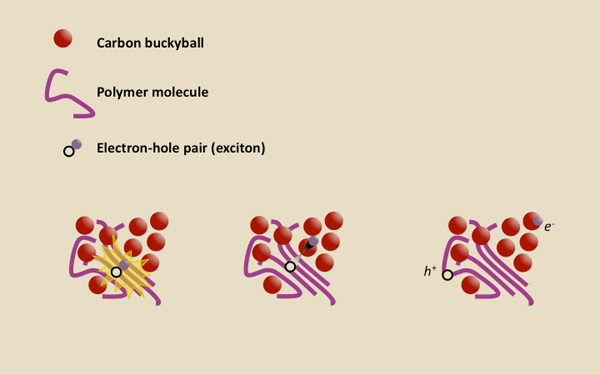 Stanford scientists may have resolved a debate over how organic solar cells turn sunlight into electricity. The question: What causes electron-hole pairs (excitons) to split apart? The likely answer: A gradient at the solar cell interface between disordered polymers and ordered buckyballs splits the exciton, allowing the electron (purple) to escape and produce an electric current. (Koen Vandewal / Stanford University)

Organic solar cells have long been touted as lightweight, low-cost alternatives to rigid solar panels made of silicon. Dramatic improvements in the efficiency of organic photovoltaics have been made in recent years, yet the fundamental question of how these devices convert sunlight into electricity is still hotly debated.

Now a Stanford University research team is weighing in on the controversy. Their findings, published in the Nov. 17 issue of the journal Nature Materials, indicate that the predominant working theory is incorrect, and could steer future efforts to design materials that boost the performance of organic cells.

"We know that organic photovoltaics are very good," said study coauthor Michael McGehee, a professor of materials science and engineering at Stanford. "The question is, why are they so good? The answer is controversial."

A typical organic solar cell consists of two semiconducting layers made of plastic polymers and other flexible materials. The cell generates electricity by absorbing particles of light, or photons.

When the cell absorbs light, a photon knocks out an electron in a polymer atom, leaving behind an empty space, which scientists refer to as a hole. The electron and the hole immediately form a bonded pair called an exciton. The exciton splits, allowing the electron to move independently to a hole created by another absorbed photon. This continuous movement of electrons from hole to hole produces an electric current.

In the study, the Stanford team addressed a long-standing debate over what causes the exciton to split.

"To generate a current, you have to separate the electron and the hole," said senior author Alberto Salleo, an associate professor of materials science and engineering at Stanford. "That requires two different semiconducting materials. If the electron is attracted to material B more than material A, it drops into material B. In theory, the electron should remain bound to the hole even after it drops.

"The fundamental question that's been around a long time is, how does this bound state split?"

One explanation widely accepted by scientists is known as the "hot exciton effect." The idea is that the electron carries extra energy when it drops from material A to material B. That added energy gives the excited ("hot") electron enough velocity to escape from the hole.

But that hypothesis did not stand up to experimental tests, according to the Stanford team.

"In our study, we found that the hot exciton effect does not exist," Salleo said. "We measured optical emissions from the semiconducting materials and found that extra energy is not required to split an exciton."

So what actually causes electron-hole pairs to separate?

"We haven't really answered that question yet," Salleo said. "We have a few hints. We think that the disordered arrangement of the plastic polymers in the semiconductor might help the electron get away."

In a recent study, Salleo discovered that disorder at the molecular level actually improves the performance of semiconducting polymers in solar cells. By focusing on the inherent disorder of plastic polymers, researchers could design new materials that draw electrons away from the solar cell interface where the two semiconducting layers meet, he said.

"In organic solar cells, the interface is always more disordered than the area further away," Salleo explained. "That creates a natural gradient that sucks the electron from the disordered regions into the ordered regions. "

The solar cells used in the experiment have an energy-conversion efficiency of about 9 percent. The Stanford team hopes to improve that performance by designing semiconductors that take advantage of the interplay between order and disorder.

"To make a better organic solar cell, people have been looking for materials that would give you a stronger hot exciton effect," Salleo said. "They should instead try to figure out how the electron gets away without it being hot. This idea is pretty controversial. It's a fundamental shift in the way people think about photocurrent generation."

Other authors of the paper are Koen Vandewal (lead author), Erik Hoke, William Mateker, Jason Bloking and George Burkhard of Stanford; Steve Albrecht, Marcel Schubert and Dieter Neher of the University of Potsdam; Johannes Widmer and Moritz Riede of the Institute for Applied Photophysics (IAPP); Jessica Douglas and Jean Frechet of the University of California-Berkeley; Aram Amassian of the King Abdullah University of Science and Technology (KAUST); and Alan Sellinger of the Colorado School of Mines and the University of Oxford. Author Kenneth Graham has a joint postdoctoral fellowship with Stanford and KAUST.

Support for the study was provided by the Stanford Center for Advanced Molecular Photovoltaics and theU.S. Department of Energy.

Mark Shwartz writes about energy technology for the Precourt Institute for Energy at Stanford University.

For more Stanford experts on energy and other topics, visit Stanford Experts.