Researchers from FOM Institute AMOLF together with colleagues from Paris and Marseille have developed a new method to understand how electrons move and become trapped in quantum dot solar cells.

Quantum dot crystals absorb light very efficiently and are therefore highly promising materials for the production of thinner and cheaper solar cells. The research team published these results on 30 September 2013 in ACS Nano. 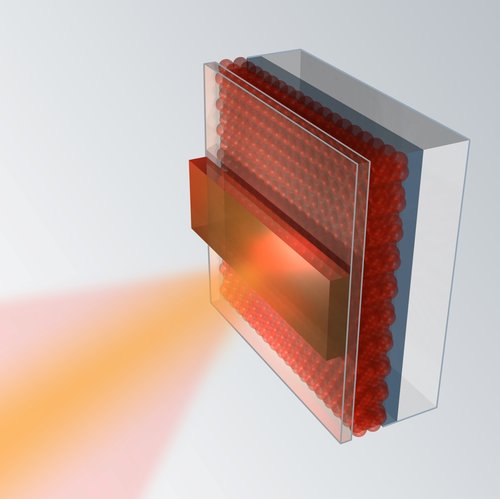 Quantum dot materials consist of very small nanocrystals, for example, of lead and sulphur atoms. These crystals are so small that the electrons contained in these crystals acquire special quantum mechanical properties: the electrons are confined in a three-dimensional quantum pit. As a result of this quantum confinement, the electrons possess specific (quantized) energies and absorb visible light very efficiently. The absorption of visible (solar) light promotes the electron to a mobile state, thus enabling the electron to jump between different quantum dots. If the electron reaches one of the electrodes, an external current will flow, meaning that the quantum dot material functions as a solar cell. At present, the efficiency of quantum dot solar cells is not very high because during the jumping process electrons often get trapped in a certain spot, thus preventing them from reaching the electrode.

Until now it was not clear how and where the electrons become trapped. The AMOLF researchers have developed a new method to gain more insight into the trapping process. They illuminated the trapped electrons with an ultrashort infrared light pulse. If the infrared light contains sufficient energy, the electrons are released and can reach the electrode. As a result, the current through the solar cell increases.

By varying the timing and frequency of the infrared light pulse, the researchers obtained essential new information on the nature of the trapping process. They discovered that different trapping mechanisms for electrons exist. Some of the electrons were trapped almost immediately after they had been generated by visible light. Other electrons were observed to travel for a longer time through the solar cell before they got trapped in a deep trap from which it was impossible to escape. The researchers also discovered that they could influence the trapping probability by changing the layer of organic molecules covering the quantum dot crystals. 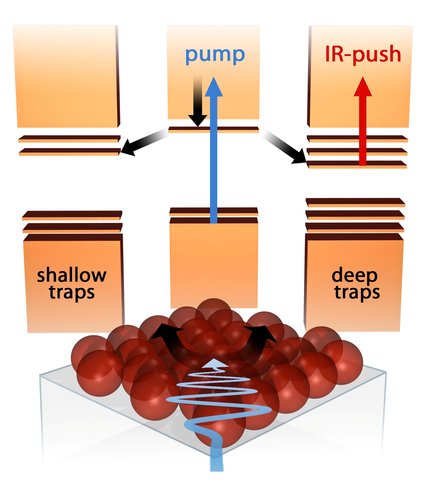 Schematic representation of electrons being trapped and released again in quantum dot crystals.

Future
The quantum dot crystals can be dissolved in a sort of ink, which can subsequently be printed on a conducting layer that functions as an electrode. In this manner cheap, light and flexible solar panels can be manufactured in a short timeframe. The insights obtained with the present research will help in the development of quantum dot solar cells with substantially higher efficiencies.

The research is part of the programme of the FOM focus group 'Light management in new photovoltaic materials'. The first author, Dr Artem Bakulin, carried out the research with a Veni grant from NWO.