The angular resolution of any optical imaging system, from cameras and microscopes to telescopes, is fundamentally constrained by diffraction, the bending of light waves around obstacles in their path 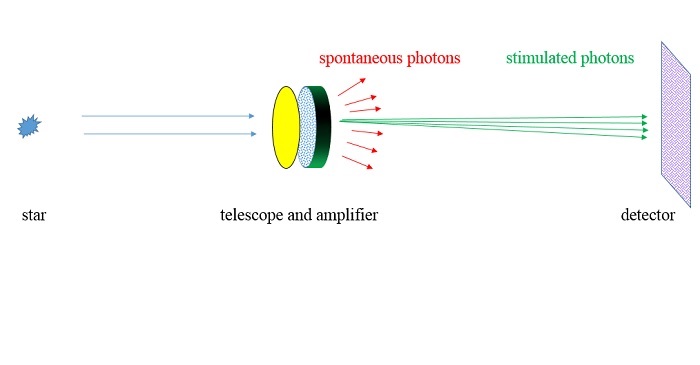 In a new paper published in the journal Optics Letters, from The Optical Society (OSA), a research team now proposes a way around the diffraction limit of telescopes—one that could potentially enable even moderately sized telescopes to obtain images with very high angular resolution.

The usable angular resolution of ground-based telescopes can be increased using adaptive objects (AO) systems, which compensate in real-time for the blurring effects of Earth’s atmosphere and ideally restore imagery to diffraction-limited resolution. However, says adaptive optics expert Aglaé N. Kellerer, University of Cambridge, United Kingdom, as telescope sizes increase, the correction becomes increasingly more complex. “In 1989, the first astronomical prototype had 19 correction elements and a 150-hertz sampling rate. Current systems have several thousand correction elements and sampling rates above 1000 Hz—and this is not the end of the line,” says Kellerer.

Kellerer and her co-author Erez N. Ribak, Technion–Israel Institute of Technology, Israel, now propose that it may be possible to improve the angular resolution of a telescope beyond the diffraction limit, using a combination of photon amplification and the statistical properties of stimulated photons versus spontaneous photons.

Consider a photon emitted by an astronomical object. Before the photon is actually detected by a given telescope, all that is known of its location is that it exists at some point on an immense spherical wave centered on the astronomical object and extending all the way to the telescope. Once the telescope’s detector records the photon, however, the photon’s pathway is narrowed to within an area constrained by the telescope’s aperture. The Heisenberg uncertainty principle indicates that because the path of the photon is now better known, the corresponding uncertainty in its momentum must increase. This limits the resolution of the telescope.

However, say Kellerer and Ribak, this limit applies only to independent photons; with sets of coherent or entangled photons, the limit can be smaller. And that is key to their idea. “We propose to use photon amplification—stimulated emission—to overcome the diffraction limit in astronomy,” she says.

Specifically, the researchers propose that excited atoms could be placed between the telescope aperture and its photon detector. When an astronomical photon enters the telescope, it will stimulate the emission of identical photons. “These photons arrive simultaneously on the detector and spread over the diffraction pattern,” Kellerer explains. “If the incoming photon stimulates the emission of 100 photons, the precision on the determination of the photon’s incoming direction is improved by a factor of 10.”

The stimulated emission would be accompanied by spontaneous emission that contributes noise. For that reason, scientists previously had discarded the idea of using photon amplification to improve astronomical imaging. Kellerer and Ribak, however, suggest using only stimulated photon bursts that are above a particular size. Astronomical photons that generate small photon bursts have a larger noise component and are discarded, reducing the overall noise. “This might allow us to overcome the diffraction limit,” she says.

One potential downside of the proposed technique is a loss of sensitivity in the images produced. “It is a price to pay,” she admits, “but it is reassuring: if we found a means to overcome the diffraction limit at no cost, we would be in contradiction with the Heisenberg uncertainty principle, and we would thus certainly be wrong.” (In addition, she notes, the loss of sensitivity can partly be overcome by increased exposure times.)

Achieving extremely high angular resolution would be beneficial for many astronomical applications, Kellerer says. As one example, she points to recent research by her group that led to the discovery of Earth-like planets around an ultracool dwarf star located 39 light years away. “Even though these planets are close by astronomical standards,” she says, “it will be extremely difficult to build telescopes that are sufficiently large, or interferometers that have a sufficiently long baseline, to image their surfaces. This will require a technological breakthrough.”