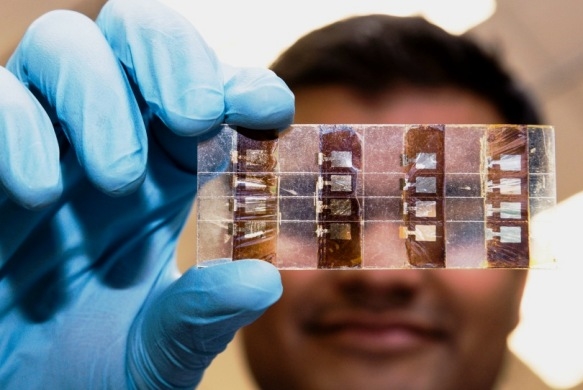 In the near future, solar panels will not only be more efficient but also a lot cheaper and affordable for everyone, thanks to research by Nanyang Technological University (NTU) scientists.

This next generation solar cell, made from organic-inorganic hybrid perovskite materials, is about five times cheaper than current thin-film solar cells, due to a simpler solution-based manufacturing process.

Perovskite is known to be a remarkable solar cell material as it can convert up to 15 per cent of sunlight to electricity, close to the efficiency of the current solar cells, but scientists did not know why or how, until now.

In a paper published last Friday (18 Oct) in the world’s most prestigious academic journal, Science, NTU’s interdisciplinary research team was the first in the world to explain this phenomenon.

The team of eight researchers led by Assistant Professor Sum Tze Chien and Dr Nripan Mathews had worked closely with NTU Visiting Professor Michael Grätzel, who currently holds the record for perovskite solar cell efficiency of 15 per cent, and is a co-author of the paper. Prof Grätzel, who is based at the Swiss Federal Institute of Technology in Lausanne (EPFL), has won multiple awards for his invention of dye-sensitised solar cells.

The high sunlight-to-electricity efficiency of perovskite solar cells places it in direct competition with thin film solar cells which are already in the market and have efficiencies close to 20 per cent.

The new knowledge on how these solar cells work is now being applied by the Energy Research Institute @ NTU (ERI@N), which is developing a commercial prototype of the perovskite solar cell in collaboration with Australian clean-tech firm Dyesol Limited (ASX: DYE).

Asst Prof Sum said the discovery of why perovskite worked so well as a solar cell material was made possible only through the use of cutting-edge equipment and in close collaboration with NTU engineers.

“In our work, we utilise ultrafast lasers to study the perovskite materials. We tracked how fast these materials react to light in quadrillionths of a second (roughly 100 billion times faster than a camera flash),” said the Singaporean photophysics expert from NTU’s School of Physical and Mathematical Sciences.

“We discovered that in these perovskite materials, the electrons generated in the material by sunlight can travel quite far. This will allow us to make thicker solar cells which absorb more light and in turn generate more electricity.”

The NTU physicist added that this unique characteristic of perovskite is quite remarkable since it is made from a simple solution method that normally produces low quality materials.

His collaborator, Dr Nripan Mathews, a senior scientist at ERI@N, said that their discovery is a great example of how investment in fundamental research and an interdisciplinary effort, can lead to advances in knowledge and breakthroughs in applied science.

“Now that we know exactly how perovskite materials behave and work, we will be able to tweak the performance of the new solar cells and improve its efficiency, hopefully reaching or even exceeding the performance of today’s thin-film solar cells,” said Dr Mathews, who is also the Singapore R&D Director of the Singapore-Berkeley Research Initiative for Sustainable Energy (SinBeRISE) NRF CREATE programme.

Professor Subodh Mhaisalkar, the Executive Director of ERI@N said they are now looking into building prototype solar cell modules based on this exciting class of materials.

“Perovskite-based solar cells have the potential to reach 20 per cent solar cell efficiencies and another great benefit of these materials is their amenability to yield different translucent colours, such as red, yellow or brown. Having such colourful solar glass will create new opportunities for architectural design,” he added.

The NTU team, consisting of six scientists, one postgraduate and one undergraduate, took six months to complete this fundamental research project, which was funded by NTU and the National Research Foundation, Prime Minister’s Office, Singapore.