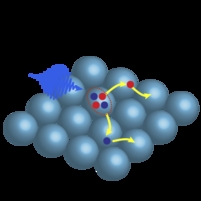 Linked quantum dots - In the new nanomaterial two or more electrons jump across the band gap as a consequence of just a single light particle (arrow with waves) being absorbed. Using special molecules the researchers have strongly linked the nanospheres (quantum dots) as a result of which the electrons can freely move and an electrical current develops in the solar cell.

Researchers from the FOM Foundation, Delft University of Technology, Toyota Motor Europe and the University of California have developed a nanostructure with which they can make solar cells highly efficient. The researchers published their findings on 23 August 2013 in the online edition of Nature Communications.

Smart nanostructures can increase the yield of solar cells. An international team of researchers including physicists from the FOM Foundation, Delft University of Technology and Toyota, have now optimised the nanostructures so that the solar cell provides more electricity and loses less energy in the form of heat.

A conventional solar cell contains a layer of silicon. When sunlight falls on this layer, electrons in the silicon absorb the energy of the light particles (photons). Using this energy the electrons jump across a 'band gap', as a result of which they can freely move and electricity flows.

Several years ago the researchers from Delft University of Technology, as well as other physicists, demonstrated that the excess energy could still be put to good use. In small spheres of a semiconducting material the excess energy enables extra electrons to jump across the band gap. These nanospheres, the so-called quantum dots, have a diameter of just one ten thousandth of a human hair.

Using laser spectroscopy the physicists saw that a single photon indeed caused the release of several electrons in the material containing linked quantum dots. All of the electrons that jumped across the band gap moved freely around in the material. As a result of this the theoretical yield of solar cells containing such materials rises to 45%, which is more than 10% higher than a conventional solar cell.

This more efficient type of solar cell is easy to produce: the structure of linked nanospheres can be applied to the solar cell as a type of layered paint. Consequently the new solar cells will not only be more efficient but also cheaper than conventional cells.