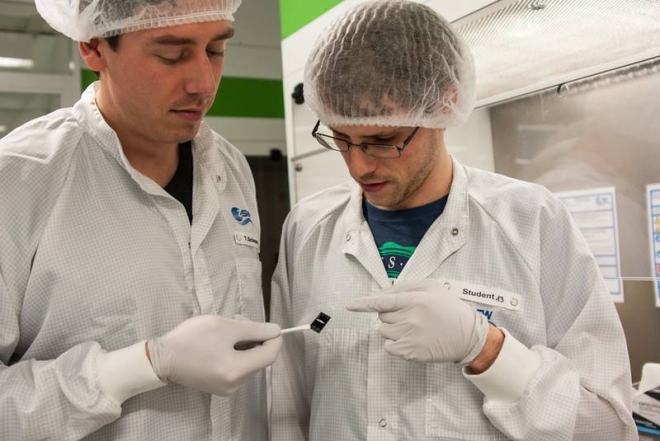 Scientists in Stuttgart had a breakthrough in their search for more advantageous materials and processes in the manufacture of efficient thin-film solar cells. A team of researchers at the Zentrum für Sonnenenergie- und Wasserstoff-Forschung Baden-Württemberg (Centre for Solar Energy and Hydrogen Research Baden-Württemberg, ZSW) has developed a simplified production process for Kesterite thin-film solar cells. The absorber layer of the new cells contains tin and zinc, two readily available and inexpensive materials. The top-performing cell reaches an efficiency of 10.3% – a new European record.

The Stuttgart-based research institute broke through the 10-percent efficiency threshold for Kesterite solar cells in October. The new value is close to the US world record of 11.1% - that cell, however, was manufactured in a more complicated process. At 0.5 square centimetres, the ZSW solar cell has the standard experimental cell size. The value has been confirmed by the Fraunhofer Institute for Solar Energy Systems ISE.

“The new compound is similar to CIGS, however, instead of indium and gallium, it contains the abundantly available elements tin and zinc,” reports Prof. Dr. Michael Powalla, ZSW Board Member and Head of the Photovoltaics Division. Thanks to the new material, the production method, which involves a simple printing process, is less expensive and less complex: “During the Kesterite solar cell manufacturing process, substrate glass is coated with a non-toxic ink solution containing the preferred elements – without requiring any complex vacuum technology.” The resulting precursor layer is subsequently selenised in a heating process. The remaining production process involves the same methods as the related CIGS technology. However, according to the ZSW, Kesterite cells are not yet ready for commercial application.

Award for the development of the solar cell of the future

The Kesterite solar cells were developed at ZSW in collaboration with researchers at the Karlsruhe Institute for Technology (KIT). The Karlsruhe School of Optics & Photonics (KSOP) is also supporting the work through a PhD scholarship. The PhD student, Thomas Schnabel, has won this year’s KSOP Publication Award in the solar energy research area. The ZSW has been collaborating for years with the KSOP and KIT’s Center for Functional Nanostructures (CFN).

The ZSW results once again confirm the importance of basic research for the application-oriented development of new solar cells. “These fundamental findings are absolutely essential for any technological progress in terms of sustainability, more efficient manufacturing processes and a reduction in costs,” says Prof. Dr. Powalla. “They help Germany maintain its long-term technological leadership in the field of photovoltaic research and production technology.”

The solar cells’ absorber layer is the central component of the thin electricity suppliers. The layer absorbs the majority of the sun light and converts it into electricity. This is why a large part of the research conducted with the aim of optimising solar cells focuses on this subject.

The Zentrum für Sonnenenergie- und Wasserstoff-Forschung Baden-Württemberg (Centre for Solar Energy and Hydrogen Research Baden-Württemberg, ZSW) is one of the leading institutes for applied research in the areas of photovoltaics, renewable fuels, battery technology, fuel cells and energy system analysis. There are currently around 230 scientists, engineers and technicians employed at ZSW’s three locations in Stuttgart, Ulm and Widderstall. In addition, there are 120 research and student assistants.

Subsidised in the context of an excellence initiative, the Karlsruhe School of Optics & Photonics (KSOP) is a graduate school at the Karlsruhe Institute for Technology (KIT). It offers a Master degree course and a PhD programme. The Karlsruhe Institute for Technology (KIT) fulfils a double mission, acting both as a university and as a national research centre within the Helmholtz Association of German Research Centres. Ranging from fundamental questions to applications, the Institute’s research focus is on energy, natural and constructed environment, society and technology.