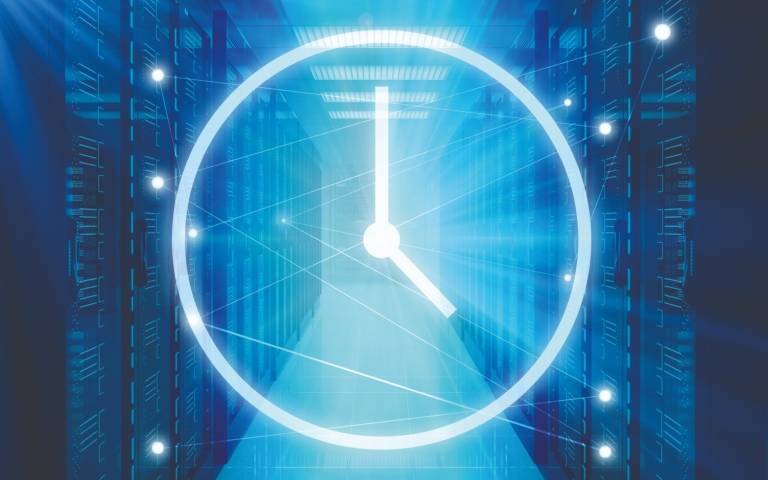 A new technique that synchronises the clocks of computers in under a billionth of a second can eliminate one of the hurdles for the deployment of all-optical networks, potentially leading to more efficient data centres, according to a new study led by UCL and Microsoft.

Data centres, comprising tens or hundreds of thousands connected servers, are the underlying technology empowering everything we do online, from storing films and photos to serving up webpages and online services. However, they face rapidly rising demand, with server-to-server traffic increasing by 70% each year, which is increasingly hard to meet with existing technologies. All-optical networks that use light to both transmit and route data represent a promising alternative. However, their viability has been limited due to the need for each server to continuously adjust its clock time according to incoming data, which resulted in lower overall performance.

The study, published in Nature Electronics, shows that by synchronising clocks of all connected servers via optical fibre, and programming hardware to memorise clock phase values so clock time does not have to be re-checked, the time to “recover” the clock could be practically eliminated.

PhD candidate Kari Clark (Optical Networks Group, UCL Electronic & Electrical Engineering, winner of the EPSRC Connected Nation Pioneers competition), lead author of the study, said: “Our research makes optical switching viable for the data centre for the first time by providing a solution to the clock synchronisation problem. It has the potential to transform communication between computers in the cloud, making key future technologies like the internet of things and artificial intelligence cheaper, faster and consume less power.”

Until now, cloud providers have been able to accommodate rapid growth in demand by relying on Moore’s Law for networking, whereby, about every two years, electronic switch integrated circuits double their data transmission speed at the same cost and power. However, the sustainability of this trend is increasingly being questioned due to the difficulty of continuing to be able to make silicon transistors smaller and faster.

Dr Hitesh Ballani and Dr Paolo Costa, researchers with Microsoft Research Cambridge and co-authors of the study, added: “With the expected slowdown of Moore’s Law and ever-increasing cloud traffic, all-optical networks represent an attractive technology that has remained elusive so far. We are very excited by this collaboration with the UCL Optical Networks Group, which started from Kari’s internship in our lab back in 2016 and evolved into a multi-year journey as part of the Optics for the Cloud Research Alliance. While there is still a long way to go, this technique brings us a step closer to the vision of an all-optical data centre.”

Dr Zhixin Liu (Optical Networks Group, UCL Electronic & Electrical Engineering), senior author of the study, said: “We started this work by investigating how to support future cloud services beyond the end of Moore’s law. By bringing the top minds from cloud operators and optical communication research, we propose a future-proof alternative using optics, helping data centres to cope with demand in the long term.”

The team, working with researchers at Microsoft Research Cambridge, developed a prototype and found that their technique, called “clock phase caching,” could synchronise the clocks of thousands of computers in under a billionth of a second, or the time it takes for light to travel 30 cm in air.

The authors demonstrated that reducing the clock recovery time to under a nanosecond resulted in a significant increase in performance of optical switching compared to state-of-the-art solutions, making it practical for data centres and unlocking its full potential.

This work is funded by the Optics for the Cloud Research Alliance, EPSRC programme grant TRANSNET (EP/R035342/1) and EPSRC New Investigator Award (EP/R041792/1).