WORLD-FIRST OPTICAL FIBRE SUCCESSFULLY TRANSMITS OVER ONE PETABIT PER SECOND 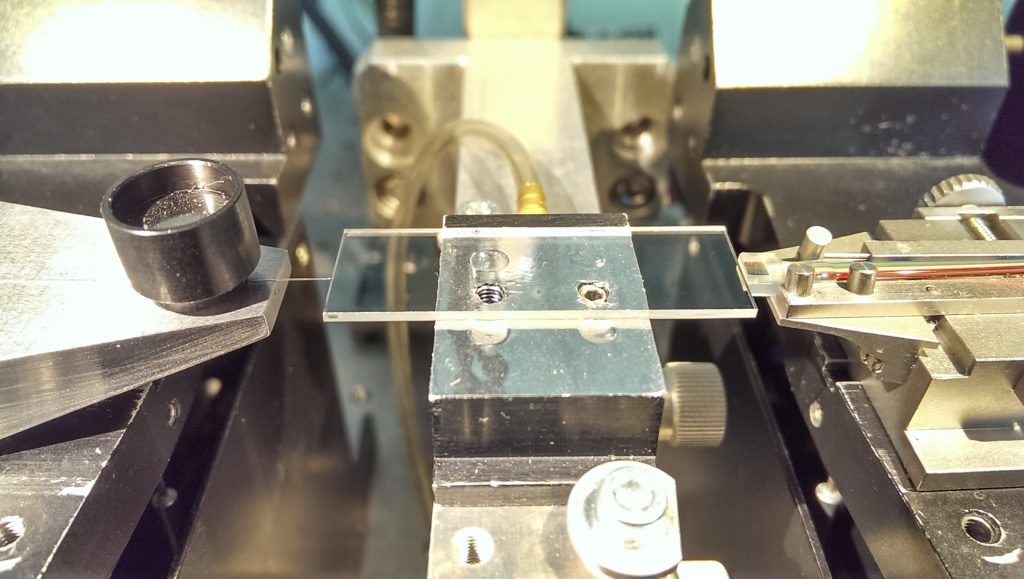 Multiplexer being tested with fibres coupled from the left and right

A world-first optical fibre as fine as a human hair has been developed, which can transmit 1.2 petabit of data per second – 12 million times quicker than the fastest NBN connection.

The dramatic improvement in speed was enabled by a coupler developed by scientists from the Macquarie University Photonics Research Centre, a fibre jointly developed by Hokkaido University and Fujikura Ltd and the transmission system developed by the National Institute of Information and Communications Technology Japan (NICT).

Internet data use is increasing exponentially, due to developments such as on-demand streaming and artificial intelligence, and fast approaching the limits of existing communications networks.

Research into new types of optical fibre that can transmit ultra-large volumes of data have to date resulted in thick fibres that are vulnerable to damage from bending and pulling.

The 4-core 3-mode fibre developed by Hokkaido University and Fujikura Ltd is almost the same width as existing standard optical fibres but can transmit 12 times as much data per second. Its narrower diameter means it is less prone to damage and can easily be cabled and connected using existing equipment, resulting in significant cost-savings over other types of fibres.

The fibre has applications in transmitting data between data centres, metropolitan networks, or undersea communications cables, with the ability to smoothly accommodate traffic for big data and 5G services.

“The world’s insatiable demand for data means that we are approaching a ‘capacity crunch’ and need to find new ways to transport ever-larger volumes,” said Dr Simon Gross from the Macquarie Photonics Research Centre.

“This technology promises a solution to the bottleneck created by existing optical fibres. For the first time, we have created a realistic and useable-sized fibre which is resilient and can transport huge amounts of data.

“It also represents a big cost saving over installing the 12 standard optical fibres you would need to transport the same volume of data.”