Researchers at the Vienna University of Technology quantum mechanically couple atoms to glass fiber cables. Now, they have shown that their technique enables storage of quantum information over a sufficiently long period of time to realize global quantum networks based on optical fibers. 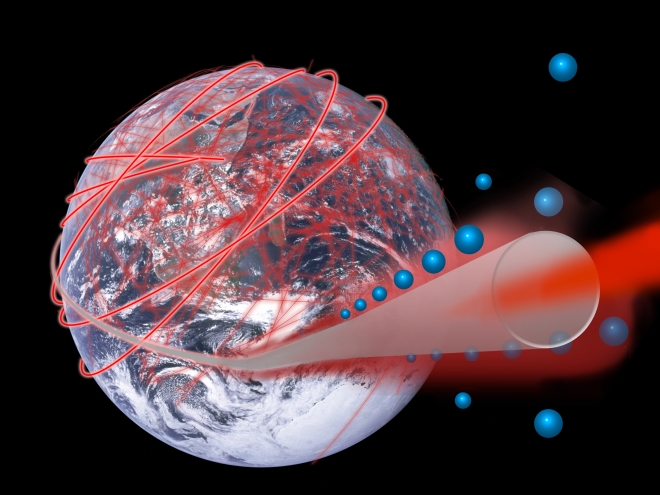 Atoms, coupled to a glass fiber - the basis of the worldwide communication network of the future?

Researchers at the Vienna University of Technology quantum mechanically couple atoms to glass fiber cables. Now, they have shown that their technique enables storage of quantum information over a sufficiently long period of time to realize global quantum networks based on optical fibers.

Will emails be quantum encrypted in the future? Will we be able to teleport quantum states over large distances via ordinary glass fiber cables? Laser-cooled atoms which are coupled to ultra-thin glass fibers are ideally suited for applications in quantum communication. Researchers at the Vienna University of Technology have now demonstrated experimentally that such glass fibers are capable of storing quantum information long enough so that they could be used for entangling atoms hundreds of kilometers apart. This constitutes a fundamental building block for a global fiber-based quantum communication network.

Atoms and light
“In our experiment, we connect two different quantum physical systems,” explains Arno Rauschenbeutel (Vienna Center for Quantum Science and Technology and Institute of Atomic and Subatomic Physics of the Vienna University of Technology). “On the one hand, we use fiber-guided light, which is perfect for sending quantum information from A to B, and, on the other hand, we rely on atoms, which are ideal for storing this information.”

By trapping atoms at a distance of about 200 nanometers from a glass fiber, which itself only has a diameter of 500 nanometers, a very strong interaction between light and atoms can be implemented. This allows one to exchange quantum information between the two systems. This information exchange is the basis for technologies like quantum cryptography and quantum teleportation.

Currently, there are different approaches towards performing quantum mechanical operations and exchanging quantum information between light and matter-based memories. However, for many of these systems it is challenging to store and to retrieve the information efficiently. The method that has been developed at the Vienna University of Technology straightforwardly overcomes this problem: “Our setup is directly connected to a standard optical glass fiber that is nowadays routinely used for the transmission of data,” says Rauschenbeutel. “It will therefore be easy to integrate our quantum glass fiber cable into existing fiber communication networks.”

Robust quantum memory
In the past, the researchers already demonstrated that atoms can be controlled and efficiently coupled to glass fibers. However, so far, the suitability of the fiber-coupled atoms for storing quantum information and for long-distance quantum communication remained an open question. –After some time, the quantum information stored in the atoms is lost as it leaks into the environment - an effect called “decoherence”.

“Using some tricks, we were able to extend the coherence time of the atoms to several milliseconds, in spite of their small distance to the fiber surface,” explains Rauschenbeutel. Light in glass fibers travels about 200 kilometers in one millisecond. As the light carries the quantum information, this defines the separation that could be bridged with such a system via the entanglement of atoms. 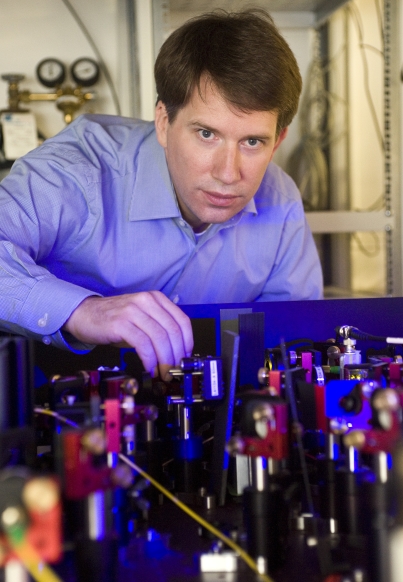 A realistic concept for a global quantum network
Even in regular glass fiber-based telecommunication, the range of light propagation is limited: the longer the fiber, the weaker the signal. In order to overcome this problem, repeater stations are inserted into the network. They amplify the optical signals after a certain distance. In this way, global communication becomes possible.

This simple concept of signal amplification cannot be implemented in quantum mechanics. It is nevertheless still possible, albeit more involved, to build so-called “quantum repeaters”. They can be used to link several shorter sections to one long quantum connection. Arno Rauschenbeutel is confident that his technique holds great promise: “By using our combined nanofiber-atom-system for setting up an optical quantum network including quantum repeaters, one might transmit quantum information and teleport quantum states around the world.”

The scientific article appears in „Physical Review Letters“ this week. Information about the experiment can also be found on arxiv.org