A team of Stanford scientists has developed an entirely non-invasive technique that provides a view of blood flow in the brain. The tool could provide powerful insights into strokes and possibly Alzheimer's disease. 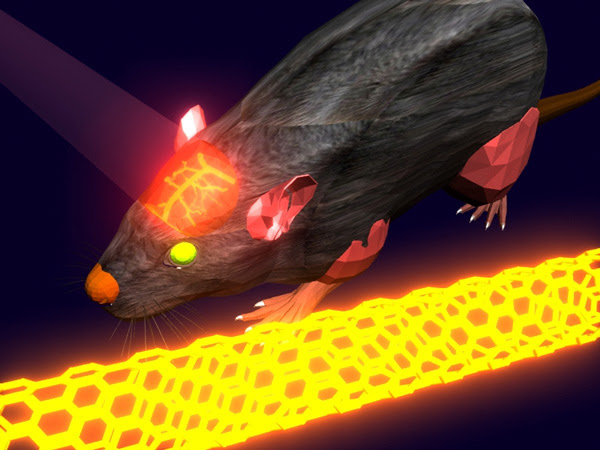 This illustration shows how carbon nanotubes, once injected into the subject, can be fluoresced using near-infrared light in order to visualize the brain vasculature and track cerebral blood flow. (Courtesy Dai Lab)

Some of the most damaging brain diseases can be traced to irregular blood delivery in the brain. Now, Stanford chemists have employed lasers and carbon nanotubes to capture an unprecedented look at blood flowing through a living brain.

The technique was developed for mice but could one day be applied to humans, potentially providing vital information in the study of stroke and migraines, and perhaps even Alzheimer's and Parkinson's diseases. The work is described in the journal Nature Photonics.

Current procedures for exploring the brain in living animals face significant tradeoffs. Surgically removing part of the skull offers a clear view of activity at the cellular level. But the trauma can alter the function or activity of the brain or even stimulate an immune response. Meanwhile, non-invasive techniques such as CT scans or MRI visualize function best at the whole-organ level; they cannot visualize individual vessels or groups of neurons.

The first step of the new technique, called near infrared-IIa imaging, or NIR-IIa, calls for injecting water-soluble carbon nanotubes into a live mouse's bloodstream. The researchers then shine a near-infrared laser over the rodent's skull.

The light causes the specially designed nanotubes to fluoresce at wavelengths of 1,300-1,400 nanometers; this range represents a sweet spot for optimal penetration with very little light scattering. The fluorescing nanotubes can then be detected to visualize the blood vessels' structure.

Amazingly, the technique allows scientists to view about three millimeters underneath the scalp and is fine enough to visualize blood coursing through single capillaries only a few microns across, said senior author Hongjie Dai, a professor of chemistry at Stanford. Furthermore, it does not appear to have any adverse affect on innate brain functions.

"The NIR-IIa light can pass through intact scalp skin and skull and penetrate millimeters into the brain, allowing us to see vasculature in an almost non-invasive way," said first author Guosong Hong, who conducted the research as a graduate student in Dai's lab and is now a postdoctoral fellow at Harvard. "All we have to remove is some hair."

The technique could eventually be used in human clinical trials, Hong said, but will need to be tweaked. First, the light penetration depth needs to be increased to pass deep into the human brain. Second, injecting carbon nanotubes needs approval for clinical application; the scientists are currently investigating alternative fluorescent agents.

For now, though, the technique provides a new technique for studying human cerebral-vascular diseases, such as stroke and migraines, in animal models. Other research has shown that Alzheimer's and Parkinson's diseases might elicit – or be caused in part by – changes in blood flow to certain parts of the brain, Hong said, and NIR-IIa imaging might offer a means of better understanding the role of healthy vasculature in those diseases.

"We could also label different neuron types in the brain with bio-markers and use this to monitor how each neuron performs," Hong said. "Eventually, we might be able to use NIR-IIa to learn how each neuron functions inside of the brain."