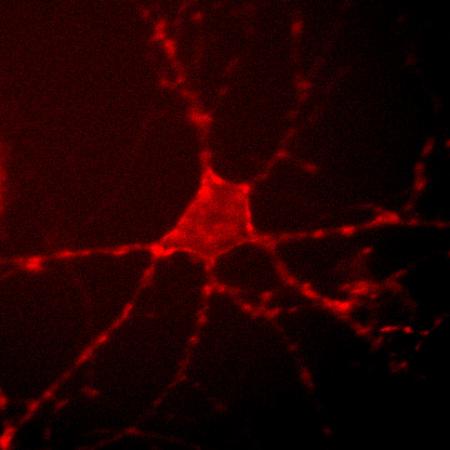 Archer1 fluorescence in a cultured rat hippocampal neuron. By monitoring changes in this fluorescence at up to a thousand frames per second, researchers can track the electrical activity of the cell. Credit: Nicholas Flytzanis, Claire Bedbrook and Viviana Gradinaru/Caltech

For years, neuroscientists have been trying to develop tools that would allow them to clearly view the brain's circuitry in action—from the first moment a neuron fires to the resulting behavior in a whole organism. To get this complete picture, neuroscientists are working to develop a range of new tools to study the brain. Researchers at Caltech have developed one such tool that provides a new way of mapping neural networks in a living organism.

When a neuron is at rest, channels and pumps in the cell membrane maintain a cell-specific balance of positively and negatively charged ions within and outside of the cell resulting in a steady membrane voltage called the cell's resting potential. However, if a stimulus is detected—for example, a scent or a sound—ions flood through newly open channels causing a change in membrane voltage. This voltage change is often manifested as an action potential—the neuronal impulse that sets circuit activity into motion.

The tool developed by Gradinaru and Arnold detects and serves as a marker of these voltage changes.

"Our overarching goal for this tool was to achieve sensing of neuronal activity with light rather than traditional electrophysiology, but this goal had a few prerequisites," Gradinaru says. "The sensor had to be fast, since action potentials happen in just milliseconds. Also, the sensor had to be very bright so that the signal could be detected with existing microscopy setups. And you need to be able to simultaneously study the multiple neurons that make up a neural network."

The researchers began by optimizing Archaerhodopsin (Arch), a light-sensitive protein from bacteria. In nature, opsins like Arch detect sunlight and initiate the microbes' movement toward the light so that they can begin photosynthesis. However, researchers can also exploit the light-responsive qualities of opsins for a neuroscience method called optogenetics—in which an organism's neurons are genetically modified to express these microbial opsins. Then, by simply shining a light on the modified neurons, the researchers can control the activity of the cells as well as their associated behaviors in the organism.

Gradinaru had previously engineered Arch for better tolerance and performance in mammalian cells as a traditional optogenetic tool used to control an organism's behavior with light. When the modified neurons are exposed to green light, Arch acts as an inhibitor, controlling neuronal activity—and thus the associated behaviors—by preventing the neurons from firing.

However, Gradinaru and Arnold were most interested in another property of Arch: when exposed to red light, the protein acts as a voltage sensor, responding to changes in membrane voltages by producing a flash of light in the presence of an action potential. Although this property could in principle allow Arch to detect the activity of networks of neurons, the light signal marking this neuronal activity was often too dim to see.

To fix this problem, Arnold and her colleagues made the Arch protein brighter using a method called directed evolution—a technique Arnold originally pioneered in the early 1990s. The researchers introduced mutations into the Arch gene, thus encoding millions of variants of the protein. They transferred the mutated genes into E. coli cells, which produced the mutant proteins encoded by the genes. They then screened thousands of the resulting E. coli colonies for the intensities of their fluorescence. The genes for the brightest versions were isolated and subjected to further rounds of mutagenesis and screening until the bacteria produced proteins that were 20 times brighter than the original Arch protein. 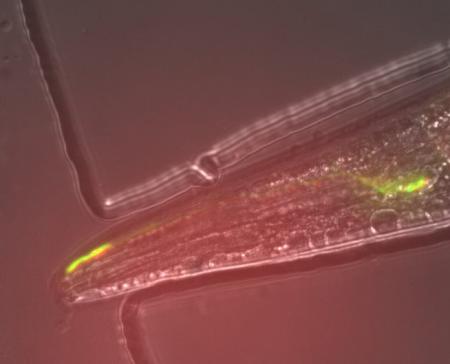 Archer1 fluorescence in an AWC sensory neuron in a live, behaving worm. The response of this cell to an odorant stimulus is monitored through tracking changes in fluorescence post-stimulation. In this way, researchers can determine the underlying voltage dynamics behind a worm's behavior.
Credit: Hui Chiu and Viviana Gradinaru/Caltech

A paper describing the process and the bright new protein variants that were created was published in the September 9 issue of the Proceedings of the National Academy of Science.

"This experiment demonstrates how rapidly these remarkable bacterial proteins can evolve in response to new demands. But even more exciting is what they can do in neurons, as Viviana discovered," says Arnold.

In a separate study led by Gradinaru's graduate students Nicholas Flytzanis and Claire Bedbrook, who is also advised by Arnold, the researchers genetically incorporated the new, brighter Arch variants into rodent neurons in culture to see which of these versions was most sensitive to voltage changes—and therefore would be the best at detecting action potentials. One variant, Archer1, was not only bright and sensitive enough to mark action potentials in mammalian neurons in real time, it could also be used to identify which neurons were synaptically connected—and communicating with one another—in a circuit.

The work is described in a study published on September 15 in the journal Nature Communications.

"What was interesting is that we would see two cells over here light up, but not this one over there—because the first two are synaptically connected," Gradinaru says. "This tool gave us a way to observe a network where the perturbation of one cell affects another."

However, sensing activity in a living organism and correlating this activity with behavior remained the biggest challenge. To accomplish this goal Gradinaru's team worked with Paul Sternberg, the Thomas Hunt Morgan Professor of Biology, to test Archer1 as a sensor in a living organism—the tiny nematode worm C. elegans. "There are a few reasons why we used the worms here: they are powerful organisms for quick genetic engineering and their tissues are nearly transparent, making it easy to see the fluorescent protein in a living animal," she says.

After incorporating Archer1 into neurons that were a part of the worm's olfactory system—a primary source of sensory information for C. elegans—the researchers exposed the worm to an odorant. When the odorant was present, a baseline fluorescent signal was seen, and when the odorant was removed, the researchers could see the circuit of neurons light up, meaning that these particular neurons are repressed in the presence of the stimulus and active in the absence of the stimulus. The experiment was the first time that an Arch variant had been used to observe an active circuit in a living organism.

Gradinaru next hopes to use tools like Archer1 to better understand the complex neuronal networks of mammals, using microbial opsins as sensing and actuating tools in optogenetically modified rodents.

"For the future work it's useful that this tool is bifunctional. Although Archer1 acts as a voltage sensor under red light, with green light, it's an inhibitor," she says. "And so now a long-term goal for our optogenetics experiments is to combine the tools with behavior-controlling properties and the tools with voltage-sensing properties. This would allow us to obtain all-optical access to neuronal circuits. But I think there is still a lot of work ahead."

One goal for the future, Gradinaru says, is to make Archer1 even brighter. Although the protein's fluorescence can be seen through the nearly transparent tissues of the nematode worm, opaque organs such as the mammalian brain are still a challenge. More work, she says, will need to be done before Archer1 could be used to detect voltage changes in the neurons of living, behaving mammals.

And that will require further collaborations with protein engineers and biochemists like Arnold.

"As neuroscientists we often encounter experimental barriers, which open the potential for new methods. We then collaborate to generate tools through chemistry or instrumentation, then we validate them and suggest optimizations, and it just keeps going," she says. "There are a few things that we'd like to be better, and through these many iterations and hard work it can happen."

The work published in both papers was supported with grants from the National Institutes of Health (NIH), including an NIH/National Institute of Neurological Disorders and Stroke New Innovator Award to Gradinaru; Beckman Institute funding for the BIONIC center; grants from the U.S. Army Research Office as well as a Caltech Biology Division Training Grant and startup funds from Caltech's President and Provost, and the Division of Biology and Biological Engineering; and other financial support from the Shurl and Kay Curci Foundation and the Life Sciences Research Foundation.