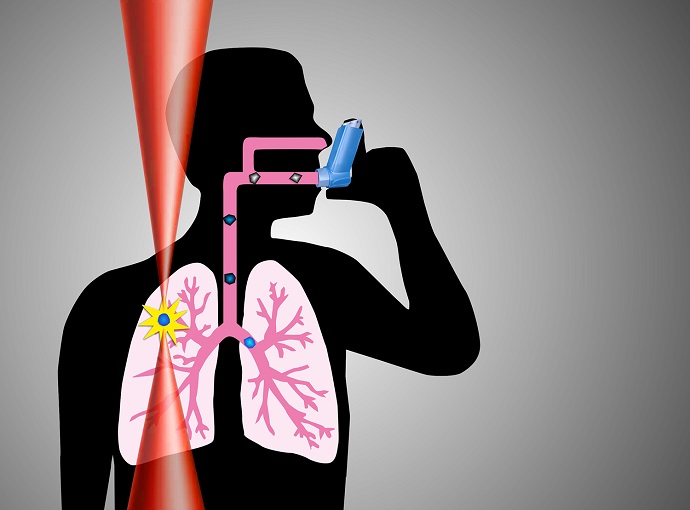 Graphic: Study of drug particles generated from asthma inhalers, in a model lung using laser beams to both levitate and interrogate the structure of the particles (Credit: STFC)

13 November 2014 – UK scientists have used a laser beam trap to examine how drug particles from asthma inhalers behave as they are projected through the air. Their findings could improve the effectiveness of inhalers for the over 5 million people in the UK suffering from asthma.

Over 73 million inhalers are used every year in the UK. By studying how the expelled drug particles might behave as they enter the human respiratory tract and travel into the lungs, this new research could lead to an improvement in the formulation of these drug delivery systems, increasing their effectiveness whilst reducing negative side effects.

Using the Octopus laser imaging facility at the Science and Technology Facilities Council (STFC) Central Laser Facility, the scientists trapped individual solid particles of the drug salbutamol sulphate. They suspended them in air to test how they behave in conditions modelled to simulate those in the human respiratory system.

This is the first time that tests on these microscopic particles have been carried out in an environment that mimics their journey from inhaler to lung. Their research is published today (13 November 2014) in the Royal Society of Chemistry journal, Chemical Communications. 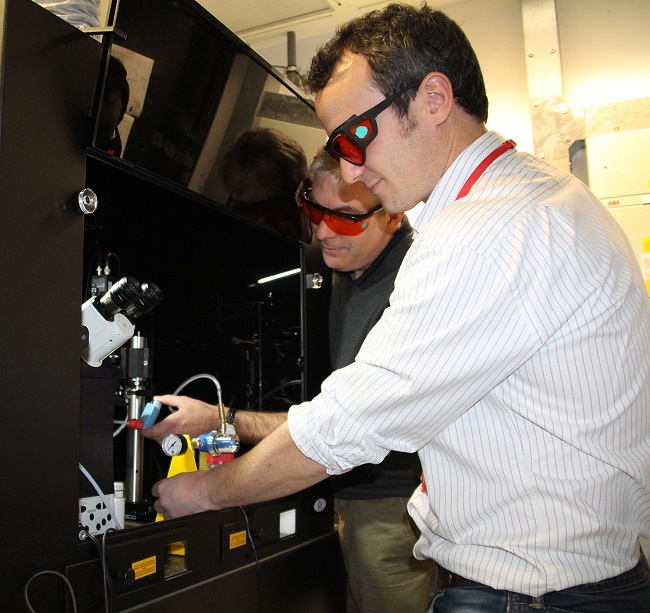 Dr Andy Ward from the STFC Central Laser Facility explained, “We captured each particle by trapping it between two focused laser beams, and then tested its behaviour in different temperatures and levels of humidity. Our tests show how water is adsorbed by following changes in chemical bond vibrations. Usually such tests are done on a glass slide so this is the first time the particles have been tested while airborne, as they would be when travelling through the respiratory tract”

“The human respiratory tract is anatomically evolved to prevent particles being inhaled”, said Dr Peter Seville from the University of Birmingham’s School of Clinical and Experimental Medicine, one of the researchers on the project.

“To overcome the natural defence mechanisms of the body, complex delivery devices and extremely small drug particles are required. These particles are typically 2-5 micron in diameter, making them approximately a tenth of the width of a human hair. Any moisture that clings to the particles as they travel from inhaler to lung is likely to increase the particles’ size, and this may affect the site of particle deposition within the lung. It can result in the drug being deposited in a non-ideal site, giving rise to less effective treatment and potentially an increase in side effects.”

Using Raman spectroscopy techniques to measure the vibration and wavelength of light from molecules, the research team was able to provide a new method of studying the salbutamol sulphate as it exited from a commercially-available inhaler.

They discharged the inhaler into the optical laser trap, without changing the drug’s physical and chemical properties, captured a microscopic particle in air and recorded its size, shape and chemical signature to show evidence of any water adsorption. This all happened within a matter of seconds, closely replicating the time, relative humidity and trajectory of the particle in the lung.

Lead investigator, Dr Francis Pope from the University of Birmingham, said,” This research could lead to more efficient inhalers to deliver drugs for respiratory problems. Our results will also inform pharmaceutical companies who may be looking to improve the chemical structure of the drug, increasing effectiveness whilst reducing negative side effects. We would not have been able to do this work without the unique capability of these lasers to capture and levitate particles, providing a new way to test the performance of the inhalers.”

These pressurised inhalers, which deliver a measured dose of drugs with each use, account for around 70% of inhaler sales in the UK, and are the most frequently used devices for asthma and chronic obstructive pulmonary disease.

The research team comprised scientists from the Universities of Birmingham and Cambridge, Imperial College London and the STFC Central Laser Facility, based at the Research Complex at Harwell, Oxfordshire.

The research was funded by STFC, NERC and the European Research Council.