Round and full, the watch face looks like a vision in a dream... Once again, Jaquet Droz invites the moon to cast its spell over the art of watchmaking with The Éclipse Mother-of-Pearl and The Éclipse Ivory Enamel. Traditionally presented in 43 mm case, the brand’s emblematic complication, is now presented in 39 mm models.

With its exceptional beauty and great delicacy, mother-of-pearl is skillfully worked by the Jaquet Droz master craftsmen. This new piece with a smaller diameter has been created to combine the brilliance of this material with the brand’s best-loved traditional watch complications: the moon phases. Apart from the date, day, month, and time display a gold moon is subtly revealed at six o’clock by a white mother-of-pearl racquet. Like a spectacle in a night sky studded with eight stars – the watchmaker’s lucky number – the moon unveils or covers its face from full to total eclipse. The fire of the diamonds set on the white gold case light up the refined architecture of this new version of The Éclipse, whose redesigned elegance is addressed to men and women who love poetic watches. 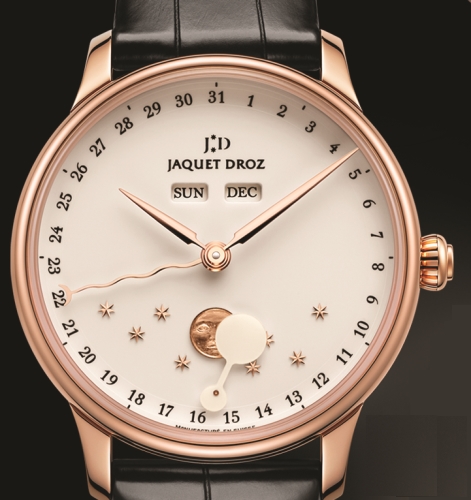 Reflecting aesthetic choices in favor of purity, subtlety, classic motifs and powerful design codes, The Éclipse Ivory Enamel celebrates the best of luxury watchmaking and house craftsmanship, starting at the dial with its Grand Feu enameling. Specific to the brand, this ancient technique requires our artisans to carefully monitor and perfectly control the kiln temperature, the key to producing this disc with its unique color and grain. This "blank page," which has a subtle beauty of its own, features eight stars – eight being the favorite number of the house – and a moon engraved in red gold. Inspired by 18th-century designs, the dial recalls the origins of the brand and its penchant, from the Enlightenment onwards, for turning to the decorative arts. The nocturnal celestial body reveals its face from behind an index cut from white onyx. Crafted with great delicacy, it creates a tone-on-tone effect that fully captures the lyricism of the cycle of lunar phases.

- Both models - which were unveiled during Baselworld 2013 - are in stores!