Picture this: Camera with no lens 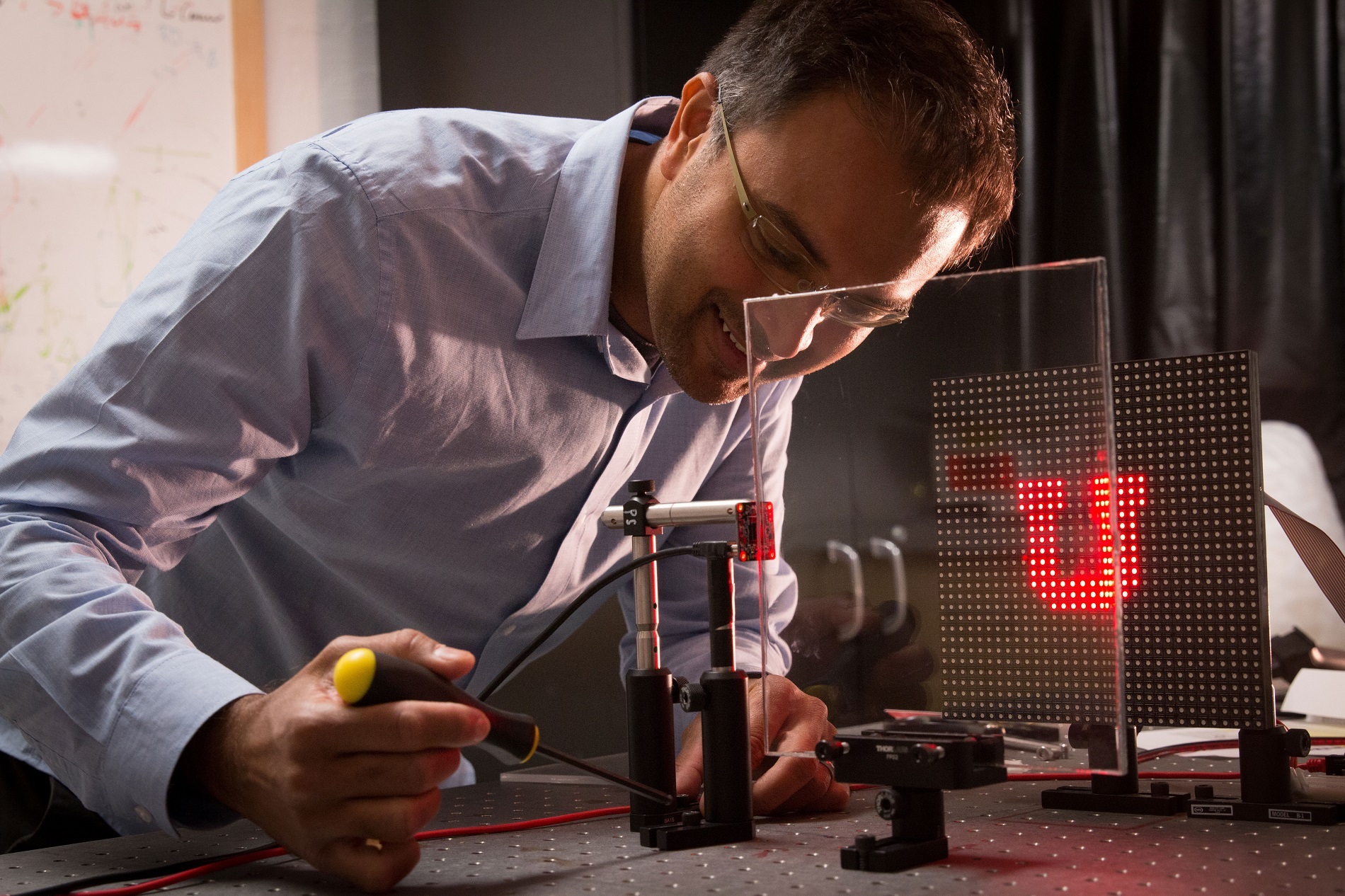 University of Utah electrical and computer engineering associate professor Rajesh Menon has discovered a way to create an optics-less camera in which a regular pane of glass or any see-through window can become the lens. Photo credit: Dan Hixson/University of Utah College of Engineering

In the future, your car windshield could become a giant camera sensing objects on the road. Or each window in a home could be turned into a security camera.

University of Utah electrical and computer engineers have discovered a way to create an optics-less camera in which a regular pane of glass or any see-through window can become the lens.

Their innovation was detailed in a research paper, “Computational Imaging Enables a ‘See-Through’ Lensless Camera,” published in the newest issue of Optics Express. A copy of the paper, which was co-authored by U electrical and computer engineering graduate Ganghun Kim, can be downloaded here.

U electrical and computer engineering associate professor Rajesh Menon argues that all cameras were developed with the idea that humans look at and decipher the pictures. But what if, he asked, you could develop a camera that can be interpreted by a computer running an algorithm?

“Why don’t we think from the ground up to design cameras that are optimized for machines and not humans. That’s my philosophical point,” he says.

If a normal digital camera sensor such as one for a mobile phone or an SLR camera is pointed at an object without a lens, it results in an image that looks like a pixelated blob. But within that blob is still enough digital information to detect the object if a computer program is properly trained to identify it. You simply create an algorithm to decode the image.

Through a series of experiments, Menon and his team of researchers took a picture of the university’s “U” logo as well as video of an animated stick figure, both displayed on an LED light board. An inexpensive, off-the-shelf camera sensor was connected to the side of a plexiglass window, but pointed into the window while the light board was positioned in front of the pane at a 90-degree angle from the front of the sensor. The resulting image from the camera sensor, with help from a computer processor running the algorithm, is a low-resolution picture but definitely recognizable. The method also can produce full-motion video as well as color images, Menon says.

The process involves wrapping reflective tape around the edge of the window. Most of the light coming from the object in the picture passes through the glass, but just enough—about 1 percent—scatters through the window and into the camera sensor for the computer algorithm to decode the image.

While the resulting photo is not enough to win a Pulitzer Prize, it would be good enough for applications such as obstacle-avoidance sensors for autonomous cars. But Menon says more powerful camera sensors can produce higher-resolution images.

Applications for a lensless camera can be almost unlimited. Security cameras could be built into a home during construction by using the windows as lenses. It could be used in augmented-reality goggles to reduce their bulk. With current AR glasses, cameras have to be pointed at the user’s eyes in order to track their positions, but with this technology they could be positioned on the sides of the lens to reduce size. A car windshield could have multiple cameras along the edges to capture more information. And the technology also could be used in retina or other biometric scanners, which typically have cameras pointed at the eye.

“It’s not a one-size-fits-all solution, but it opens up an interesting way to think about imaging systems,” Menon says.

From here, Menon and his team will further develop the system, including 3-D images, higher color resolution and photographing objects in regular household light. His current experiments involved taking pictures of self-illuminated images from the light board.