Compact and Rugged, Phantom VEO Offers the Ultimate in Size, Speed and Resolution for a Wide Range of Scientific and Industrial Applications 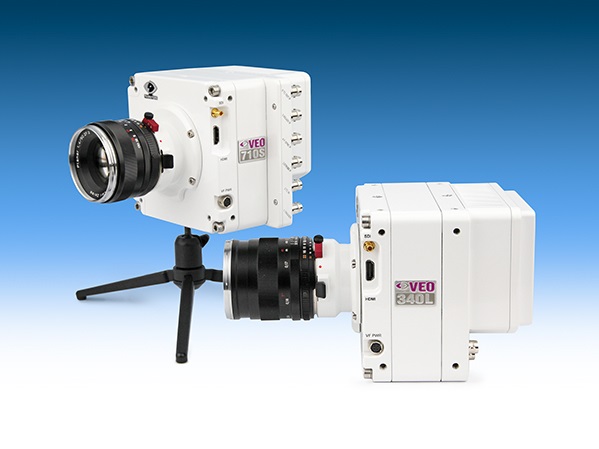 Comprising eight individual models across four performance levels and two body styles, users will have incredible flexibility to identify a high-speed camera that meets their specific needs. All Phantom VEO cameras incorporate high-performance 12-bit, 35mm CMOS sensors (color or mono) with a choice of lens mount. At maximum resolution, the one-megapixel (1280x800) Phantom VEO 710 and 410 can record at speeds up to 7,400 frames-per-second (fps) and 4,000 fps respectively, while the four‑megapixel (2560x1600) VEO 640 and 340 can record at speeds of 1,400 fps and 800 fps respectively.

“Vision Research engineers are always pushing the envelope when it comes to the future of digital high-speed imaging,” said Toni Lucatorto, VEO Product Manager. “We pay close attention to customer feedback and focus on the specific needs of those in the field – both from a feature set and budget perspective - to bring new, exciting and specialized solutions to market.”

Depending on the application and environment the camera will be used in, users can specify a Phantom VEO in either an L or S configuration. Ideal for traditional high-speed imaging in a lab or office setting, the L-body style employs a tethered software-based workflow, while the Phantom VEO S-body configuration boasts added features and functionality including additional ports, CFast 2.0 media and On-Camera Controls (OCC) for use with video monitors.

All VEO camera models are rugged and built to withstand up to 100G with isolated electronics. All models also include new features including an HDMI output, Exposure Index controls and Programmable I/O architecture.

Onboard Memory and Enhanced Record Times

Phantom VEO cameras are available with three onboard RAM memory configurations of 18GB, 36GB or 72GB, which means that VEO cameras can capture more frames than most other comparable cameras on the market.

Once recorded to RAM, files can then be offloaded via Gb Ethernet or, with Phantom VEO ‘S’ models, transferred to non-volatile CFast 2.0 memory for true remote and untethered recording. Once filled to capacity, users can swap the card and download using a standard card reader. This provides for a seamless workflow and keeps the camera online and ready for the next shot.

To learn more about the Phantom VEO family of high-speed cameras, click here