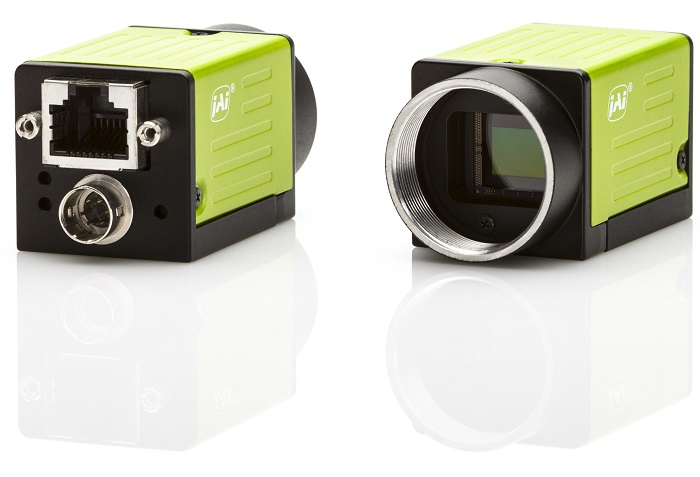 COPENHAGEN – July 6, 2016 – JAI today announced the latest additions to its Go Series of small industrial cameras. The GO-5100-PGE is a new 5-megapixel camera available in monochrome and Bayer color models built around the Sony PregiusTM IMX250 CMOS sensor. The GO-5101-PGE delivers the same 5-megapixel resolution using the Sony PregiusTM IMX264 CMOS imager. It too offers a choice of monochrome or Bayer color models.

The cameras let users define a region-of-interest from within the full resolution, which can then be output at a faster frame rate. Similarly, on monochrome models, 1x2, 2x1, and 2x2 binning is available for both added sensitivity and faster frame rates at reduced overall resolution.

As part of JAI’s popular Go Series, the GO-5100-PGE and GO-5101-PGE feature a small form factor (29 mm x 29 mm x 41.5 mm, excluding lens mount) and weigh only 46 grams – among the lightest cameras available at this resolution. More importantly, the cameras carry the same industrial-grade specifications as other Go Series models to ensure performance in factory environments. These include an 80G shock rating, 10G vibration rating, a standard operating temperature range of -5°C to +45°C, and an overall MTBF rating of more than 200,000 hours.

A multi-ROI mode is included on the GO-5100-PGE models to allow users to define from 2 to 64 sub-regions within a single frame. This lets users maintain a wide field of view while reducing the amount of data being read out of the camera and increasing the overall frame rate.