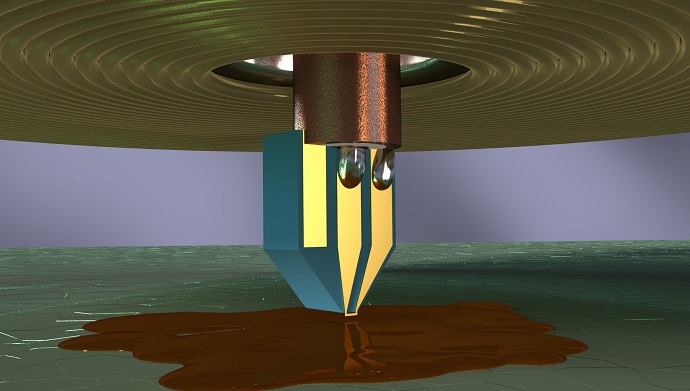 ESR micro probe: NIST has made electron spin resonance useful for exploring tiny objects for the first time, potentially enabling the decades-old technique to spot defects on computer chip surfaces or view the workings of proteins on the surface of cells. Credit: NIST

Researchers at the National Institute of Standards and Technology (NIST) have come up with a way to shrink a research instrument generally associated with large machines that make bulk measurements of samples down to a literally pinpoint-precision probe. The team's electron spin resonance (ESR) probe takes a large-scale technique used for decades as a way to explore the overall properties of bulk materials and for the first time makes it useful for exploring tiny objects or specific spots on large ones.

The new probe is expected to have a broad range of applications in fields ranging from chemistry to semiconductor design and manufacturing.

"We are really over the moon about this work," says NIST's Jason Campbell. "Our new approach brings more than 20,000 times improvement in sensitivity over conventional ESR and allows for investigation of all sorts of samples that were never thought possible."

ESR is widely used in chemistry and biology research because it can reveal how molecules stick together. It's widely utilized in an eclectic collection of fields spanning anthropology, fuel science, physiology and meteorology. The expiration dates on some foods in the grocery store are determined using ESR as well. For many foods, shelf life can be predicted well by ESR monitoring the broken chemical bonds that occur over time.

But the technique's sensitivity limits relegates it to analyzing materials in bulk—often frustrating scientists, who have imagined wider uses for six decades. If ESR could be trained precisely on small objects or surfaces, it might detect defects on computer chip surfaces or tell us more about the workings of proteins on the surface of cells, to name just two possibilities.

Its limitation stems from the need to place the sample into a small resonant chamber. ESR works by combining a magnetic field with microwave energy, which together, get molecular bonds vibrating in telltale ways. The resonant chamber focuses the microwaves on the sample, just like they would in a microwave oven, introducing some of the same problems familiar to microwave chefs.

"ESR is quick and convenient in some ways, but you don't have as much control over the spot you're exploring as you might like," says NIST's Jason Campbell. "And you can't put anything metallic or conductive into the resonance chamber, meaning it's very difficult to look at transistors or other electronic devices."

The NIST team's innovation was to forgo the resonant chamber entirely. Instead, they introduce microwave energy by forcing high-frequency current through a microscopic wire, which acts as a tooth like probe tip that can be moved within a few micrometers of a sample material. Using this approach, the team was able to examine specific points on a surface.

"Combined with other techniques, we can imagine seeing atom-sized defects in chips," says Campbell, an electrical engineer whose work often concerns the semiconductor industry. "But we're also excited for the huge number of people who can now use this technique in chemistry and biology. It's a simple, elegant solution to a longstanding problem."