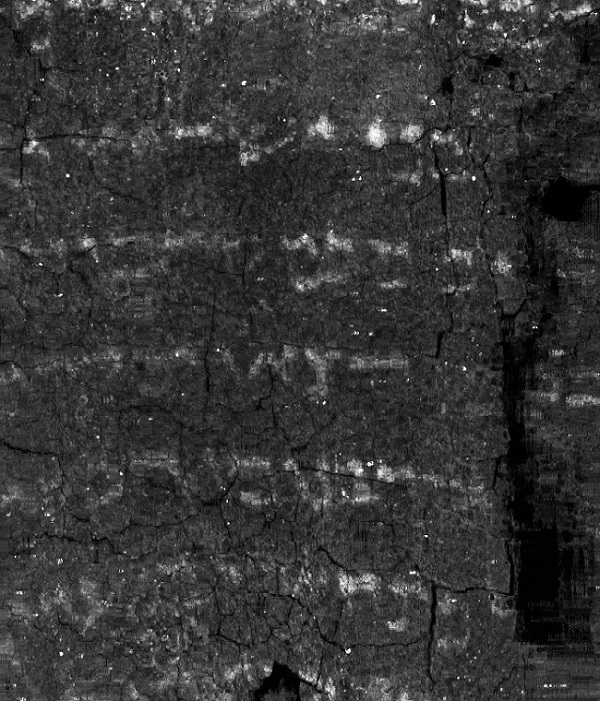 Unwrapped texture image of the Ein Gedi scroll, produced by Seales and his research team, showing letters of the Hebrew alphabet.

LEXINGTON, Ky. (July 20, 2015) — For the first time, advanced technologies made it possible to read parts of a scroll that is at least 1,500 years old, which was excavated in 1970 but at some point earlier had been badly burned. The scroll was discovered inside the Holy Ark of the synagogue at Ein Gedi in Israel. High-resolution scanning and University of Kentucky Professor Brent Seales' revolutionary virtual unwrapping tool revealed verses from the beginning of the Book of Leviticus suddenly coming back to life.

On Monday the rare find was presented at a press conference in Jerusalem, attended by Israel's Minister of Culture and Sports, MK Miri Regev, and the director of the Israel Antiquities Authority, Israel Hasson. Seales attended via Skype.

"The text revealed today from the Ein Gedi scroll was possible only because of the collaboration of many different people and technologies," said Seales, who is professor and chair of the UK College of Engineering's Department of Computer Science. "The last step of virtual unwrapping, done at the University of Kentucky through the hard work of a team of talented students, is especially satisfying because it has produced readable, identifiable, biblical text from a scroll thought to be beyond rescue."

The parchment scroll was unearthed in 1970 in archaeological excavations in the synagogue at Ein Gedi, headed by the late Dan Barag and Sefi Porath. However, due to its charred condition, it was not possible to either preserve or decipher it.

The Lunder Family Dead Sea Scrolls Conservation Center of the Israel Antiquities Authority (IAA), which uses state of the art and advanced technologies to preserve and document the Dead Sea scrolls, enabled the discovery of this important find. It turns out that part of this scroll is from the beginning of the Book of Leviticus, written in Hebrew, and dated by C14 analysis, a form of radiometric dating used to determine the age of organic remains in ancient objects) to the late sixth century C.E. To date, this is the most ancient scroll from the five books of the Hebrew Bible to be found since the Dead Sea scrolls, most of which are ascribed to the end of the Second Temple period (first century B.C.E.-first century C.E.).

The Israel Antiquities Authority cooperated with scientists from Israel and abroad to preserve and digitize the Dead Sea Scrolls.

The Ein Gedi scroll was scanned with a micro-computed tomography machine from Skyscan (Bruker). Data from the scan is the sole basis of Seales' software analysis. The scanning process is x-ray-based and completely non-invasive as the Ein Gedi scroll is badly damaged from fire and cannot be physically opened. The scans were done in Israel with assistance from Merkel Technologies Company, Ltd. Israel and Pnina Shor, curator and director of IAA’s Dead Sea Scrolls Projects, provided the data to Seales for analysis. Results were produced non-invasively from scan data alone – the Ein Gedi scroll itself remains intact and unopened.

"The partnership with Pnina Shor of the IAA has been particularly satisfying in the way she has enabled our team to work on data from one of the most storied and valuable collections in the world," Seales said. "I am humbled by her trust in our research team, and gratified to produce for her and the entire scholarly community these exceptional results."

The results come from research and a software prototype designed to do “virtual unwrapping” of surfaces from within volumetric scans. This unwrapping process allows the visualization of evidence of writing on a surface from within a scanned volume.  Because the surfaces of the object being scanned are not flat like a book – rather they are rolled up as a scroll – the visualization of the surface and the evidence of writing upon the surface is a complex process.

"I have been using the word 'surface' to refer to the page of biblical text we have revealed. But this is a term of geometry, not of precise position," Seales said. "The page actually comes from a layer buried deep within the many wraps of the scroll body, and is possible to view it only through the remarkable results of our software, which implements the research idea of 'virtual unwrapping.'" 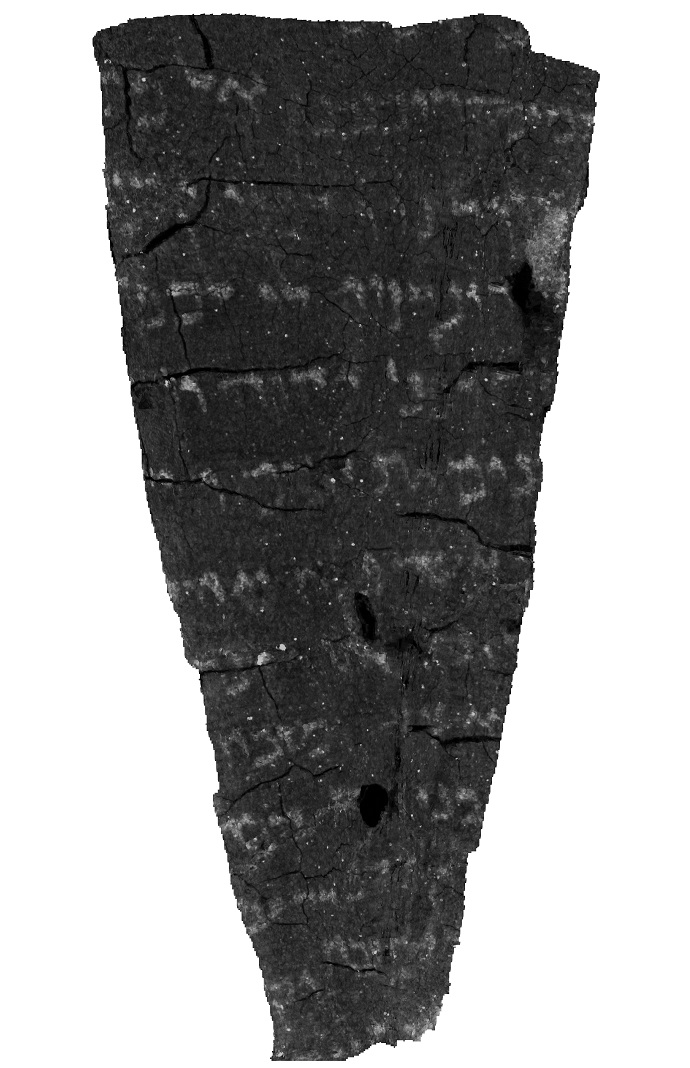 Thus, the great surprise and excitement when the first eight verses of the Book of Leviticus suddenly became legible:

“The Lord summoned Moses and spoke to him from the tent of meeting, saying: Speak to the people of Israel and say to them: When any of you bring an offering of livestock to the Lord, you shall bring your offering from the herd or from the flock.  If the offering is a burnt-offering from the herd, you shall offer a male without blemish; you shall bring it to the entrance of the tent of meeting, for acceptance in your behalf before the Lord. You shall lay your hand on the head of the burnt-offering, and it shall be acceptable in your behalf as atonement for you. The bull shall be slaughtered before the Lord; and Aaron’s sons the priests shall offer the blood, dashing the blood against all sides of the altar that is at the entrance of the tent of meeting. The burnt-offering shall be flayed and cut up into its parts. The sons of the priest Aaron shall put fire on the altar and arrange wood on the fire. Aaron’s sons the priests shall arrange the parts, with the head and the suet, on the wood that is on the fire on the altar. (Leviticus 1:1-8).

This is the first time in any archaeological excavation that a Torah scroll was found in a synagogue, particularly inside a Holy Ark. 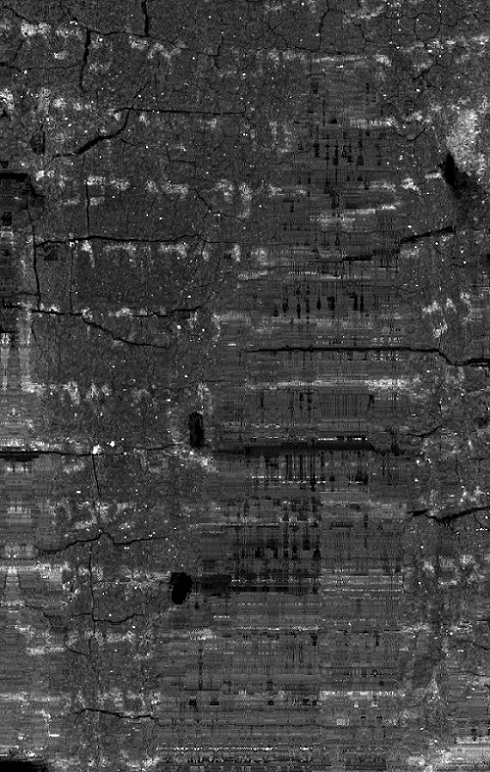 Unwrapped texture image of the Ein Gedi scroll, produced by Seales and his research team, showing letters of the Hebrew alphabet.

The research team at UK produced the flattened, readable text from the micro-computed tomography of the Ein Gedi scroll via the following successive stages:

The data scan from the micro-CT machine is processed in order to enhance the ability to see the structures in the scan: the surface of the material, and the ink that is written on that material.

The data scan is carefully partitioned into the surfaces on which there is writing.  This partitioning is automatic and uses computer algorithms that are being developed through research. The result is a 3-D surface that is positioned exactly in the data volume where there is evidence of surfaces and writing.  Because the surfaces are rolled up layers within the scroll, they are shaped like tightly coiled sheets of paper.

The user revises and improves the surface estimates that were made automatically by the surface segmentation step. The user is guided by views of the data scan and a draft view of how the surface appears in the scan.

The completed surface is rendered as a high quality 3-D surface with the texture (markings, structure and ink evidence) from its precise position in the original data scan. The rendering step also produces a flattened version of the 3-D surface texture. This unwraps the potentially curvy and coiled 3-D surface so that it is a single flat page.

Each step of this pipeline requires custom software, the development of which has been the subject of active research for this Ein Gedi scroll work as well as work on material from Herculaneum. Learn more about virtual unwrapping in the short video below.

University of Kentucky – Computer Science Department, Center for Visualization, and College of Engineering 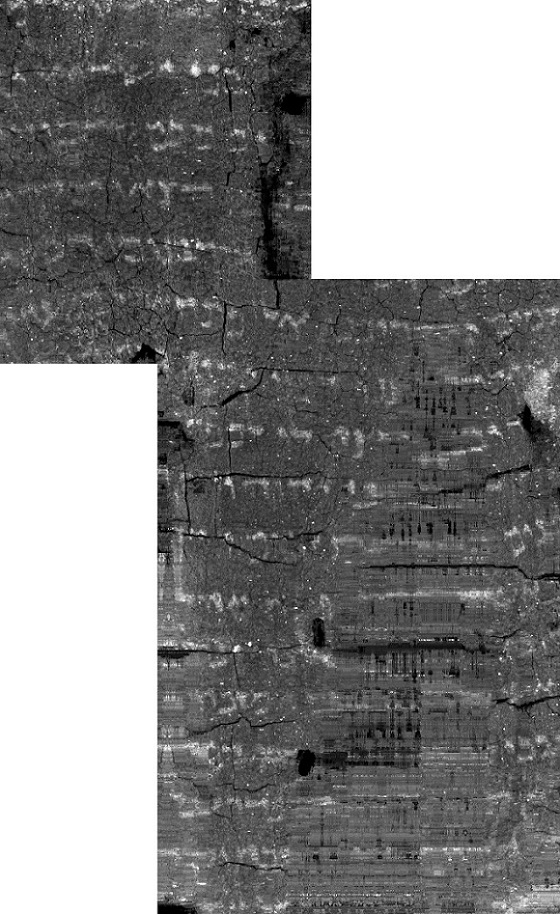 Image of the unwrapped textures, aligned and connected in one image produced by Seales and his research team. 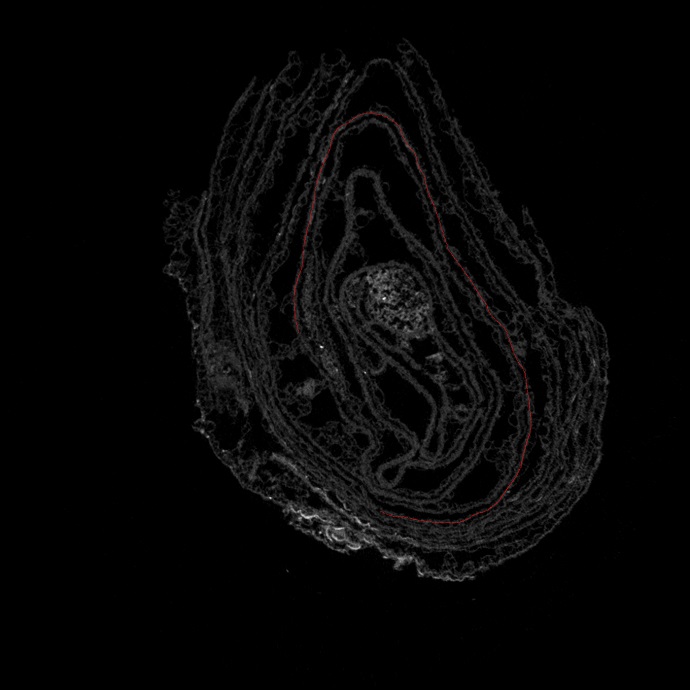 A slice image from Ein Gedi one of the paths projected onto it, produced by Seales and his research team.

"Today we are recovering evidence of an important text — one that was thought to be beyond repair," Seales said. "But more than that, we are delivering hope for revealing other lost texts, and a systematic, scientific blueprint for how to do it."