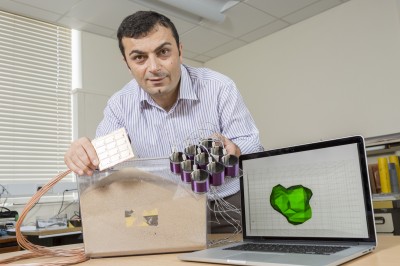 Dr Manuchehr Soleimani will lead a three-year, £100,000 research project to develop technology that can differentiate between images of plastic and metallic elements within a single device, at depths of up to 10cm underground on varied terrain.

The research funding was awarded via a competition organised by the Engineering and Physical Sciences Research Council (EPSRC) and will explore how advanced capacitive/inductive camera technology could be used to locate landmines concealed underground.

It is estimated there are 110 million landmines buried across the world, with the potential to kill and maim innocent men, women and children for decades to come. Yet landmine detection techniques have barely changed since the Second World War.

The fact that modern day landmines are usually plastic instead of metal makes detection extremely difficult. In addition to facing the technological challenges, the landmine problem is also an economic one: a landmine which costs £2 to purchase can cost between £120 – £600 to find and clear, not to mention the immeasurable cost on human life

To help address this global humanitarian issue, Sir Bobby Charlton set up the charity Find A Better Way (FABW) to fund research into new, more affordable ‘smart’ landmine detection systems and technologies. Charlton witnessed for himself the destruction caused by landmines during visits to Bosnia and Cambodia in 2005 and 2007 respectively, as part of his role as a Laureus Sport for Good Ambassador.

In addition to funding research into detection technology, the charity supports education and humanitarian benefits to improve conditions for people living in former war zones such as Cambodia, Laos, Jordan, Lebanon and Iraq.

The University’s Dr Manuchehr Soleimani will lead a three-year, £100,000 research project to develop technology that can differentiate between images of plastic and metallic elements within a single device, at depths of up to 10cm underground on varied terrain. Initial findings have demonstrated positive results for the technology at finding both dielectric and metallic samples concealed underground.

To be successful, the technology needs to be affordable, lightweight and integrated within a robot alongside other technologies, allowing it to identify the plethora of different devices across a variety of locations.

Dr Soleimani, Associate Professor in our Department of Electronic & Electrical Engineering and Leader of the Engineering Tomography Lab (ETL) commented: “Currently, manual metal detectors sweep minefields in a slow and time-consuming process which cannot detect non-metallic landmines. We aim to develop an integrated technology to detect both metallic and non-metallic landmines and to improve the speed and reliability of this process.”

Sir Bobby Charlton, founder of Find A Better Way said: “The UN estimates that it would take more than 1,100 years to clear the estimated 110 million landmines situated in 70 countries. As a charity we are determined to find a practicable technology solution that can bring an end to this humanitarian tragedy.”

“I set up Find A Better Way to search for more effective technology to detect landmines and explosive remnants of war after witnessing first-hand the devastation these can cause to individuals and communities. Our partnership with the University of Bath will help us to make significant progress with our aim to deliver significant improvements in demining detection capability to ultimately negate the effects landmines and explosive remnants of war pose across the globe.”

Professor Gary Hawley, Dean of the Faculty of Engineering & Design added: “It is exciting to see early positive results from this important, life-saving research which could really benefit people and communities around the world.”

All of the research carried out by the University’s Department of Electronic & Electrical Engineering was recently ranked ‘internationally excellent’ (3*) and ‘world-leading’ (4*) for its impact by the 2014 Research Excellence Framework (REF), an independent assessment of UK university research activity.