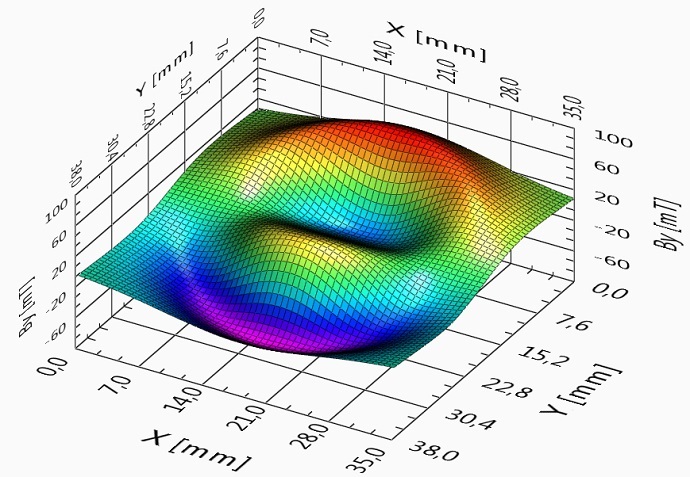 Erlangen/Nuremberg, May 6, 2015 – Sensor+Test, Hall 12, Exhibit Booth 537: "HallinSight" is the name of an innovative 3D magnetic field camera developed by researchers at the Fraunhofer Institute for Integrated Circuits IIS. Equipped with an array of 3D sensors, the camera can measure magnetic fields in all three dimensions at extremely high speeds. The camera's high resolution makes it suitable for quality assurance applications and laboratory testing. Fraunhofer IIS will debut "HallinSight" at the Sensor+Test trade fair being held from May 19 to May 21 in Nuremberg.

One of the potential applications for the magnetic field camera is characterizing and controlling the quality of permanent magnets, which are never perfectly magnetized. For this reason it is important to understand to what extent the magnetization is imperfect especially for applications that rely on precision positioning technology. The camera precisely measures the magnetic fields with an array of 3D sensors based on the HallinOne® technology. The 256 sensors are mounted 2.5 mm apart on a 40x40 mm surface. With 128 parallel-operating signal processing channels, the camera boasts a measurement frequency of up to 200 Hz, a performance not yet achieved by another technology to date. That means even rapid dynamic magnetic processes can be recorded.

The "HallinSight" camera makes it possible to capture an image of a three-dimensional (vector-based) magnetic field within only 5 ms. This can only be accomplished by moving away from the conventional sequential scanning method and deploying more advanced simultaneous sensor operation. The measurement results from the 3D sensors are acquired by means of parallel "snapshots". The information can then be displayed in real-time or stored for analysis and documentation with a graphics software application, which is also used to configure the camera. A USB interface provides easy connectivity to the PC.

The camera is also suitable for integration with various test systems. Thanks to the extremely high recording speed of 200 images per second, the "HallinSight" camera is an excellent choice for inline testing in production environments. It takes only 2 ms to record a full image. After an additional 3 ms for signal processing and data transfer, the next image can be captured.

Each 3D sensor detects the magnetic field with a resolution of 10 μT. This equates to a fraction of the Earth's magnetic field and makes it possible to visualize the finest magnetic field details. With HallinOne® technology, magnet manufacturers in particular can now implement post-production quality assurance measures to an extent not previously thought possible. Since the test range can be expanded from ±100 mT to ±1.000 mT, measurements can also be performed directly on the surface of rare-earth magnets. This allows the direct detection and analysis of inhomogenities in all common magnetic materials.

With a sensor gap of 2.5 mm, the "HallinSight" camera is especially well suited for analyzing small, simple dipole or larger multipole magnets. Since the detection surface can be separated from the interface-electronics, the option exists to install the camera directly in a magnet system or a production line. The camera can withstand temperatures ranging from -40 °C to 125 °C, making it suitable for harsh environments as well. The potential fields of application range from the characterization and quality assurance of permanent magnets, to multidimensional position measurements, nondestructive material inspections and analyzing the electromagnetic field distribution of actuators and motors. »HallinSight« can even be utilized for the real-time detection of stray magnetic fields emanating from electric generators. This can lead to higher efficiency, especially in the area of renewable energy.

The "HallinSight" camera will be demonstrated live during the 2015 Sensor+Test trade fair in Nuremberg from May 19 to May 21. Visitors can even bring their own magnets and have it characterized at the exhibit booth. "HallinSight" measurements can also be carried out at the Fraunhofer IIS facility in Erlangen upon request.