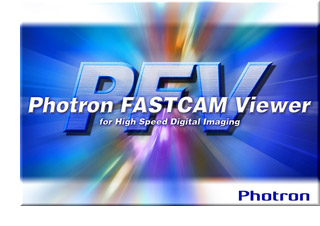 Like the high speed cameras it is engineered to support, the PFVsoftware is frequently copied by the competition, but never surpassed when it comes to performance, reliability and ease of use. PFV was the first camera control software to provide:

•  Wrappers for both the popular LabVIEW and MATLAB programs.

•  Integrated optional motion analysis software for the automated tracking of points of interest within a recorded slow motion video sequence.

Now, once again, Photron has set new standards for camera control software with several exciting new functions added to the version 3.3.9 including:

• Easy adoption of popular image aspect ratios, including 16:9 HD and the more familiar 4:3 aspect ratio. These can be selected by simply selecting your desired frame rate, then dragging your mouse around the screen to select the area you will record.

•  Playback control buttons directly on the video window you are reviewing.

•  The displayed temporal units can be changed to your preferred choice, such as degrees of rotation or any other application specific unit.

•  The hardware image trigger now utilizes a histogram to make it even easier for you to set the camera up so that it triggers automatically when your predetermined event occurs in the image window.

•  There is a new PIV Focus Mode for quick setup and alignment of Particle Image Velocimetry (PIV) applications.

•  The 'Cycle View' plug-in makes it easy to select the precise images from a repetitive cycle, such as engine combustion, that you display every cycle.

All the above and several minor tweaks and improvements to existing functionality still not found in other camera manufacturers' camera control/replay/editing software. Isn't it time you backed your camera's front end with equal performance at the replay and download stage? If you are not already using Photron products, then make the switch, because you deserve unmatched image quality, and product reliability with software that makes sure you get the very best from your camera every time you use it.

To get instant access to these features and many more for your own Photron high-speed camera, then sign up to our support page and download Photron FASTCAM Viewer (PFV) version 3.3.9 HERE

About Photron
Photron was founded in 1974 to provide manufacturing, sales and service of professional film and video equipment and photo-instrumentation. Since then, Photron has been offering photo optics and electronic technologies to manufacturing industries, the medical field, film laboratories, major movie and television studios, as well as to the military worldwide.