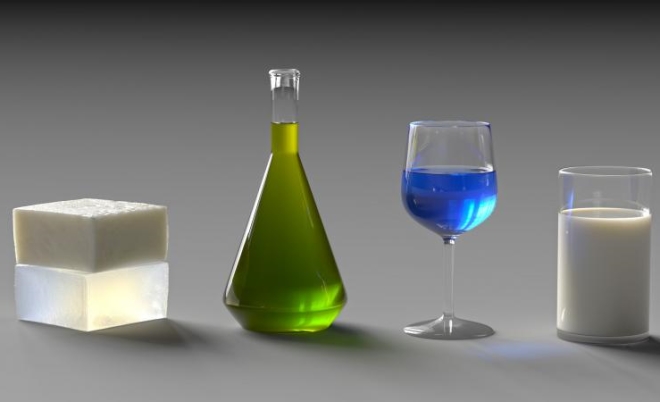 The subtleties in these computer-generated images of translucent materials are important. Texture, color, contrast, and sharpness combine to create a realistic image. (Courtesy of Ioannis Gkioulekas and Shuang Zhao.)

Cambridge, Mass. - July 22, 2013 - Computer graphics and digital video lag behind reality; despite advances, the best software and video cameras still cannot seem to get computer-generated images and digital film to look exactly the way our eyes expect them to.

But Hanspeter Pfisterand Todd Zickler, computer science faculty at the Harvard School of Engineering and Applied Sciences (SEAS), are working to narrow the gap between ‘virtual’ and ‘real’ by asking a common question: how do we see what we see?

Between them, Pfister and Zickler are presenting three papers this week at SIGGRAPH 2013, the 40th International Conference and Exhibition on Computer Graphics and Interactive Techniques. 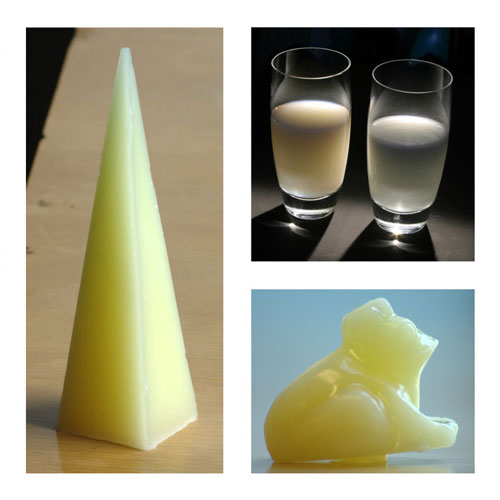 Realistic soap
One project led by Zickler, the William and Ami Kuan Danoff Professor of Electrical Engineering and Computer Science, tries to find better ways to mimic the appearance of a translucent object, such as a bar of soap. The paperelucidates how humans perceive and recognize real objects and how software can exploit the details of that process to make the most realistic computer-rendered images possible.

“If I put a block of butter and a block of cheese in front of you, and they’re the same color, and you’re looking for something to put on your bread, you know which is which,” says Zickler. “The question is, how do you know that? What in the image is telling you something about the material?”

His hope is to eventually understand these properties well enough to instruct a computer with a camera to identify what material an object is made of and to know how to properly handle it—how much it weighs or how much pressure to safely apply to it—the way humans do.

The new approach focuses on translucent materials’ phase function, part of a mathematical description of how light refracts or reflects inside an object, and, therefore, how we see what we see.

In the past, phase function shape was considered relevant to an object's translucent appearance, but formal perceptual studies had never been carried out. This is because the space of different phase functions is so vast and perceptually diverse to the human brain that modern computational tools were required to generate and analyze so many different images.

Zickler’s team took advantage of increased computational power to trim down the potential space of images to a manageable size. They first rendered thousands of computer-generated images of one object with different computer-simulated phase functions, so each image’s translucency was slightly different from the next. From there, a program compared each image’s pixel colors and brightness to another image in the space and decided how different the two images were. Through this process, the software created a map of the phase function space according to the relative differences of image pairs, making it easy for the researchers to identify a much smaller set of images and phase functions that were representative of the whole space.

Finally, the researchers asked people to compare these representative images and judge how similar or different they were, shedding light on the properties that help us decide which objects are plastic and which are soap simply by looking at them.

“This study, aiming to understand the appearance space of phase functions, is the tip of the iceberg for building computer vision systems that can recognize materials,” says Zickler. The next step in this research will involve finding ways to accurately measure a material’s phase functions instead of making them up computationally, and Zickler's team is already making progress on this, with a new system that will be presented at SIGGRAPH Asia in December.

By creating tiny grooves of varying depths across the screen’s surface, Zickler’s team created optical interference effects that cause the thin surface to look different when illuminated or viewed from different angles.

The paper essentially asks, “If I know what appearances I want the screen to have, how do I optimize the geometric structure to get that?” Zickler explains.

The solution takes advantage of mathematical functions (called bidirectional reflectance distribution functions) that represent how light coming from a particular direction will reflect off a surface.

Past attempts to control surface reflection for graphics applications have only been accomplished for surfaces displaying huge images that, for example, have pixels the size of a square inch, because their analyses did not account for interference effects. Zickler’s work, however, demonstrates that interference effects can be exploited to control reflection from a screen at micron scales using well-known photolithographic techniques.

In the future, this kind of optimization could enable multi-view, lighting-sensitive displays, where a viewer rotating around a flat surface could perceive a three-dimensional object while looking at the surface from different angles, and where the virtual object would correctly respond to external lighting.

"Looking at such a display would be exactly like looking through a window," Zickler says.

He was joined on this paper by Ying Xiong, a graduate student at Harvard SEAS; Anat Levin and Daniel Glazner at the Weizmann Institute of Science; and Frédo Durand, William Freeman, and Wojciech Matusik at MIT.

“The starting idea was to appeal to broad audience, like the millions of people on YouTube,” says lead author Nicolas Boneel, a postdoctoral researcher in Pfister’s group at SEAS.

Pfister’s team hopes to make frame-by-frame editing unnecessary by creating software that lets users simply select, hypothetically, the Amélie look or the Transformers look. The computer would then apply that color palette to the user’s video via a few representative frames. The user only has to indicate where the foreground and background are in each frame, and the software does the rest, interpolating the color transformations throughout the video.

Boneel estimates that the team’s new color grading method could be incorporated into commercially available editing software within the next few years.

Pfister and Bonneel were joined on this paper by Kalyan Sunkavalli and Sylvain Paris of Adobe Systems, Inc.

The Association for Computing Machinery SIGGRAPH conference continues from July 21 to 25 in Anaheim, California. The three papers will be published in ACM Transactions on Graphics.

Pfister’s research was supported in part by the National Science Foundation (CGV-1111415).