Physicists of the attoworld-team at MPQ and LMU have uncovered what happens during the sampling of a light field. This helped them increase the sensitivity of the measurement by up to one order of magnitude. 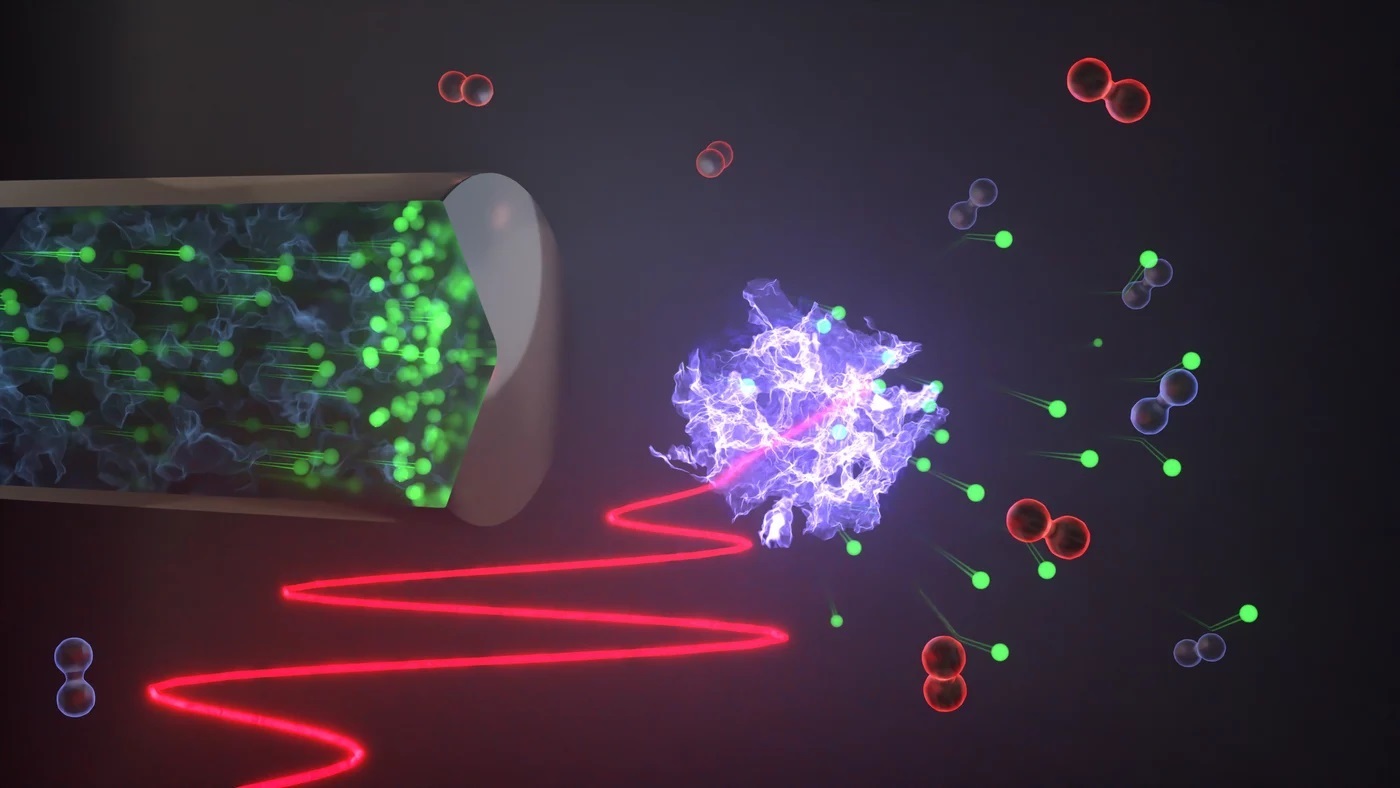 A strong few-cycle laser pulse leads to strong-field ionization of gas atoms and molecules. The motion of electrons (green) ejected from the atoms and molecules by the light induces a current in the nearby electrode. The process is influenced by the charge interaction between the charge carriers as well as by electron scattering. RMT Bergues

Future electronics will be fast. It could be driven at the frequencies of light waves. This implies that the switching speeds would be roughly 100,000 times faster than today. The development of electronics driven by light requires a detailed characterization of the light waves’s electromagnetic fields. Modern so-called field-sampling methods allow for probing the temporal evolution of a light field. While these techniques have been established, a complete and detailed understanding of their underlying mechanism has been lacking. Now, an international team at the Ludwig-Maximilians-Universität München (LMU) and Max Planck Institute of Quantum Optics (MPQ), under the leadership of Prof. Matthias Kling and Dr. Boris Bergues, has uncovered what exactly happens during the sampling of light fields and how their interaction with matter induces measurable currents in electronic circuits.

Light is a fascinating phenomenon of nature. It is incredibly fast and its electromagnetic field varies with extremely high frequencies. In the visible spectral range, light oscillates with nearly one petahertz (one thousand trillion = 1015 oscillations per second). This property can be exploited in technology to drive future electronics with the help of the light fields, making it 100,000 times faster than today.

Sophisticated technologies, however, are required in the first step to precisely capture and control these ultrafast oscillations. This is enabled by so-called field-sampling methods. Short laser pulses ionize air near a metal electrode. Thereby, charge carriers are released, which induces currents in the electrode. The direction and strength of the electric current depend on the exact form of the light field, which enables its control. In previous studies, however, it has remained unclear how exactly the generated charge carriers determine the measured current. Moreover, there has been no possibility so far to predict the expected current quantitatively.

Now, an international team at MPQ and LMU, under the leadership of Prof. Matthias Kling and Dr. Boris Bergues, has uncovered this mechanism. With the help of experimental studies and numerical calculations, the scientists were able to quantitatively model the process. As Dr. Johannes Schötz, first author of the publication, explains: “the study has shown that scattering and charge interaction of the generated charge carriers play an essential role in the formation of the macroscopic signal via ultrafast current generation in gases”.

In particular, the researchers have discovered how the strength of the generated signals can be increased by an order of magnitude. This will help further increase the sensitivity and accuracy of field sampling measurements.

This study is an important step towards novel opto-electronic applications. It paves the way to future light-field-controlled electronics. With their findings the scientists anticipate to advance the development of more efficient and highly sensitive PHz field measurements.