Physicists at MPQ have developed a novel photonic instrument to non-destructively reveal the entanglement of two distant atomic qubits. 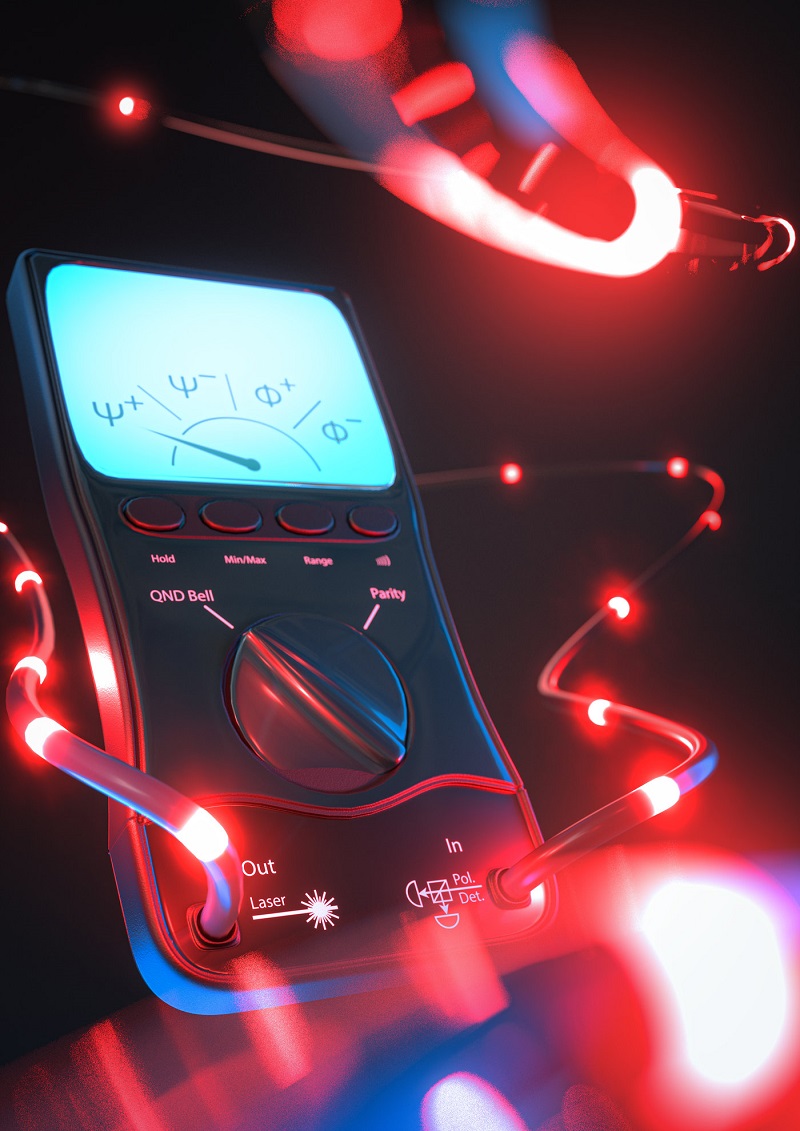 Entanglement is one of the most important properties of quantum particles and a core resource of many emerging quantum technologies. However, its leverage as a resource is limited as entanglement is a fragile phenomenon that is often destroyed upon detection. Until now: Using photons as ancillas, a team of physicists at the Max Planck Institute of Quantum Optics (MPQ) has successfully developed a novel technique to detect entangled states of distant qubits while still preserving their entanglement. Their discovery is an important tool for realizing the vision of large scale quantum networks or distributed quantum computers. The paper was published in Nature Photonics.

What Einstein once referred to as “a spooky action at a distance” is among the most paradox and baffling concepts in entire physics. Entanglement allows particles to be correlated to each other in a way that they cannot be described independently – even though they are located in different places. They seem connected via an invisible force, as long as the entanglement maintains. “This puzzling but charming concept of quantum mechanics is an extremely precious resource that enables many of the new and powerful quantum technologies”, explains Prof. Gerhard Rempe, director of the MPQ and leader of the team that conducted the research. Among others, quantum computers, for instance, rely on entanglement of qubits – quantum storages of information – to quickly realize complex computations.

As entanglement is so vital to many applications, scientists struggle to find new and efficient methods not only to generate but also to detect entangled states. “Detecting entangled states means to reveal – or measure – how exactly qubits are entangled together” explains Stephan Welte, Postdoc in Prof. Rempe´s Quantum Dynamics Group and first author of the paper. However, there are many different ways in which qubits can be entangled with each other, and being able to differentiate all of them is very difficult. On top of that, entanglement is very fragile, and it can be easily destroyed in the attempt to detect it.

An analogy may be useful to understand this properly. Consider a simple case of only two qubits, and imagine them as being two strings completely tied together and therefore entangled. Detecting their entangled state means finding out in which way they have been tied. Everyone who is trying to solve this problem and has the two strings in front, would probably follow this approach: untie them to understand how they have been tied in the first place. This way is effective, and is what most techniques rely on, but with one immanent problem: once the strings are untied the entanglement is gone.

The question at hand is: How can we detect the entangled state of two or more qubits without destroying it? Over the course of the last year, a team of physicists around Emanuele Distante and Stephan Welte, both Postdocs at MPQ, have investigated this problem and now proposed a solution which was published in Nature Photonics last week. Their idea is to use photons as a mediator of information. Following the analogy above, the physicists added two photons as “extra strings”, let each photon interact with both qubits, and then looked at how the photons had changed after the interaction. The extra strings (photons) are attached to the initial strings (qubits) in a very precise and controlled way, and depending on which shape, state or form the additional strings take after being added to the initial ones, it is possible to deduce the way the strings were tied together. „The key difference is that the entanglement is measured without disentangling the qubits, it is deduced from the photons rather than broken apart, and the precious entanglement resource remains available for future use”, explains Emanuele Distante. 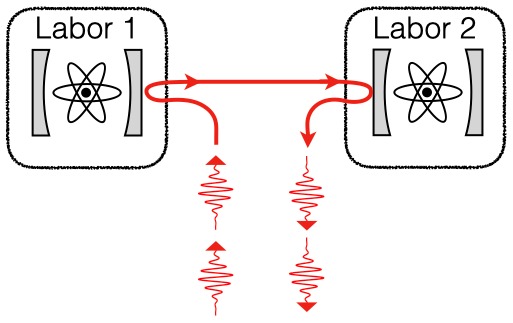 Two optical resonators, one per Lab, are represented as two grey mirrors. Each resonator contains a single atom. Photons - wiggling red arrows - bounce from the resonator in Lab 1 to the one in Lab 2.

As qubits, the physicists employed two laser-cooled single-atoms, each one sitting at the center of an optical resonator – also known as optical cavity – which is constructed of two opposing tiny mirrors at the heart of a vacuum chamber. The single atom and their respective resonators are located in two different labs and connected by an optical fibre. The two photons are reflected from the first atom-cavity system, then travel to the second atom-cavity system via the optical fibre where they are reflected again, and finally measured. This measurement then successfully delivers all the necessary information to deduce how the two atoms are entangled – without destroying the entanglement.

Scaling up the quantum network

The most fascinating prospect for the physicists now is to scale up the entanglement measurement to more qubits. The two atomic qubits, in fact, can be thought of as part of a larger quantum network containing more qubits. “As photons travel inside optical fibers, they can be used to measure more than only two qubits. This should allow us to build an entanglement meter that detects in which way many qubits – say three, or four, or even more – located in a network are entangled together”, says Emanuele Distante envisioning the future of this research project. “Until that happens, however, some technical challenges are yet to be overcome, but the route is clear”, adds Stephan Welte.