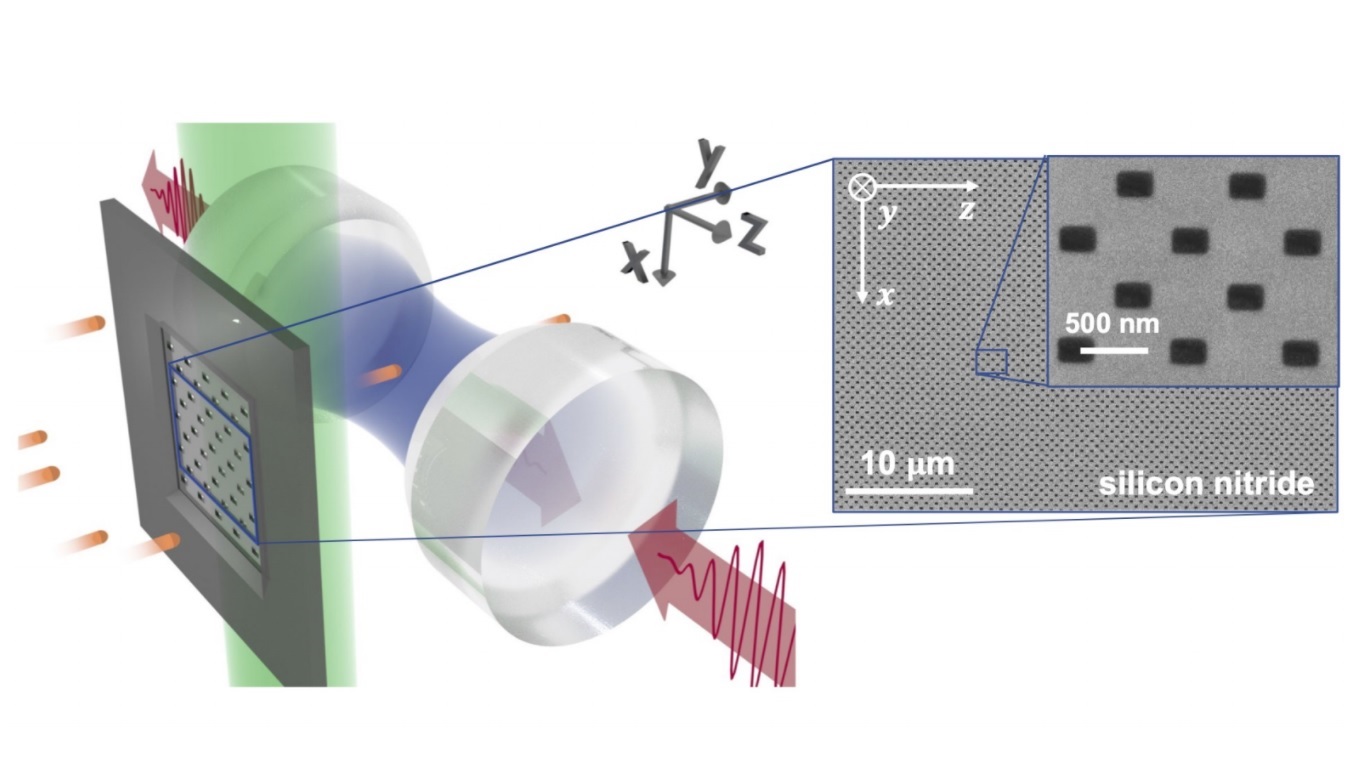 Figure 1: Atoms are localized at antinodes of the cavity by a checkerboard-pattern nanohole aperture fabricated on 10-nm-thickness silicon nitride membrane. The nanohole array also allows the atoms to be excited in the same quantum superposition state by a traveling pump field (in green shade).

Researchers at Seoul National University in Korea have realized superabsorption, the opposite of superradiance, for the first time. In superabsorption, correlated atoms collectively absorb light rapidly and completely and the number of absorbed photons is proportional to the square of the number of atoms. The study was published online by the journal Nature Photonics on March 1, 2021(BST).

Increasing efficiency in light absorption is essential in many areas such as solar cells, light energy harvesting and quantum interconnects. Studies so far have used atoms (or molecules) prepared initially in their lowest energy level, the ground state. In this case, atoms individually absorb light and thus the number of photons absorbed per unit time is proportional to the number of atoms. Since the light intensity decreases exponentially in time, complete absorption cannot occur in a finite time.

In order to achieve a super version of absorption, or superabsorption, one needs to utilize quantum correlation. If individual two-level atoms are prepared in the same quantum superposition state of ground and excited states, the atoms are quantum-mechanically correlated. Such collective atomic state is called a superradiant state. The atoms in a superradiant state spontaneously undergoes superradiance and the emission rate as a whole is proportional to the square of the number of atoms. Interestingly, the superradiant state also has an absorption rate equally strong as its emission rate. It simply does not absorb the incident light. It tends to undergo superradiance instead.

Recently, several theoretical proposals have been made to achieve superabsorption by utilizing complex quantum control of a collection of atoms with elaborate vacuum engineering to suppress the favored superradiance process. However, no one has succeeded in achieving superabsorption by any means.

In a paper recently published in the journal Nature Photonics, the research team led by Prof. Kyungwon An at Seoul National University reports realization of superabsorption by time reversal of superradiance process.

Alternatively, the same time reversal is achieved by flipping the phase of the< superradiant state.

In their experiment, barium atoms in a beam were prepared in a superradiant state and interacted with a probe field in a cavity. The phase of the superradiant state was then adjusted to reverse the otherwise superradiant process in time. The atoms then absorbed light instead of emitting light, resulting in superabsorption. The observed absorption rate was about 10 times faster than that of ordinary absorption for the same number of atoms (about 10 atoms in their experiment). Moreover, the light was completely absorbed in a finite time and the number of absorbed photons was proportional to the square of the number of atoms, which is the very signature of superabsorption.

They prepared the single atoms in the same quantum superposition state by controlling their position in a nanometer resolution with a nanohole-array atom aperture, first developed in their previous work reported in Nature Communications in 2014. A similar nanohole array aperture was also used in the coherent single-atom superradiance experiment reported in Science in 2018.