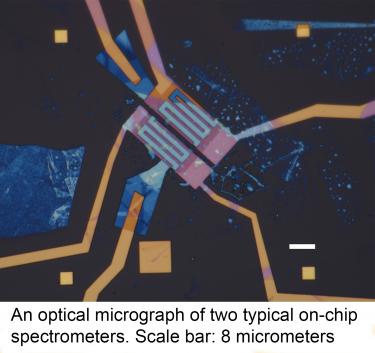 An international team of researchers has developed a mid-infrared spectrometer smaller than the diameter of a human hair.

With potential applications that range from detecting greenhouse gases to making self-driving vehicles safer, there has been a great deal of interest in recent years in developing compact, on-chip spectrometers. Traditional spectrometers, which measure the spectral information of light, are bulky and expensive. An on-chip spectrometer would greatly expand the applications and accessibility of the technology.

Toward this goal, a team of researchers in the U.S., Israel, and Japan has developed an ultracompact mid-infrared spectrometer. The work is the result of a collaboration between the laboratory of Fengnian Xia, the Barton L. Weller Associate Professor in Engineering and Science at Yale University; Professor Doron Naveh of Bar-Ilan University, Israel; Kenji Watanabe and Takashi Taniguchi of National Institute for Materials Science, Japan. The findings were recently published in Nature Photonics.

The device incorporates black phosphorus (BP), a material that has long been a focus of the Xia lab, for a spectrometer that is operational at a 2- to 9- micrometer wavelength range, based on a single tunable photodetector. The material, which is about ten nanometers thick, allows users to tune the light-matter interaction to capture the different spectral components - a key to the device’s success. Moreover, an advanced algorithm plays an equally important role in this spectrometer, partly shifting the innate complexity in spectroscopy from hardware to software.

With a size of 9×16 square micrometers - much smaller than the cross-section of a human hair - the spectrometer’s dimensions are comparable to the wavelength of light that it measures. Even if it were possible to make the device smaller, it would not show much improvement, since light in usual conditions cannot be focused onto a spot much smaller than its wavelength, due to diffraction.

“It is very exciting to realize such a high-performance spectrometer with the ultimate compactness,” said Prof. Doron Naveh of Bar-Ilan University. “We expect that the principle of leveraging advances in hardware and software simultaneously as shown in this work will lead to commercial applications in medicine, agriculture and food quality control.”

With conventional spectrometers, light is split up by the colors that compose the spectrum.

“This spectrometer shows an advantage over conventional light-splitting spectrometers because the light doesn’t need to be split into different parts spatially,” said Shaofan Yuan, a Ph.D. student in Xia’s lab, and lead author of the study.

And unlike conventional spectrometers, the system does not rely on such advanced optical components as interferometers or tunable infrared lasers. That opens the possibility for an extreme miniaturization of spectrometers and could enable on-chip, affordable mid-infrared spectroscopy and spectral imaging. The researchers note that automobiles, drones, and satellites are often outfitted with infrared cameras that take grayscale thermal images to detect pedestrians, vehicles, and other hazards. The Xia lab’s spectrometer has a potentially higher detection ability for such potential threats since the spectral information can be continuously measured, albeit with moderate resolution. Additionally, it can also be useful in remote sensing.