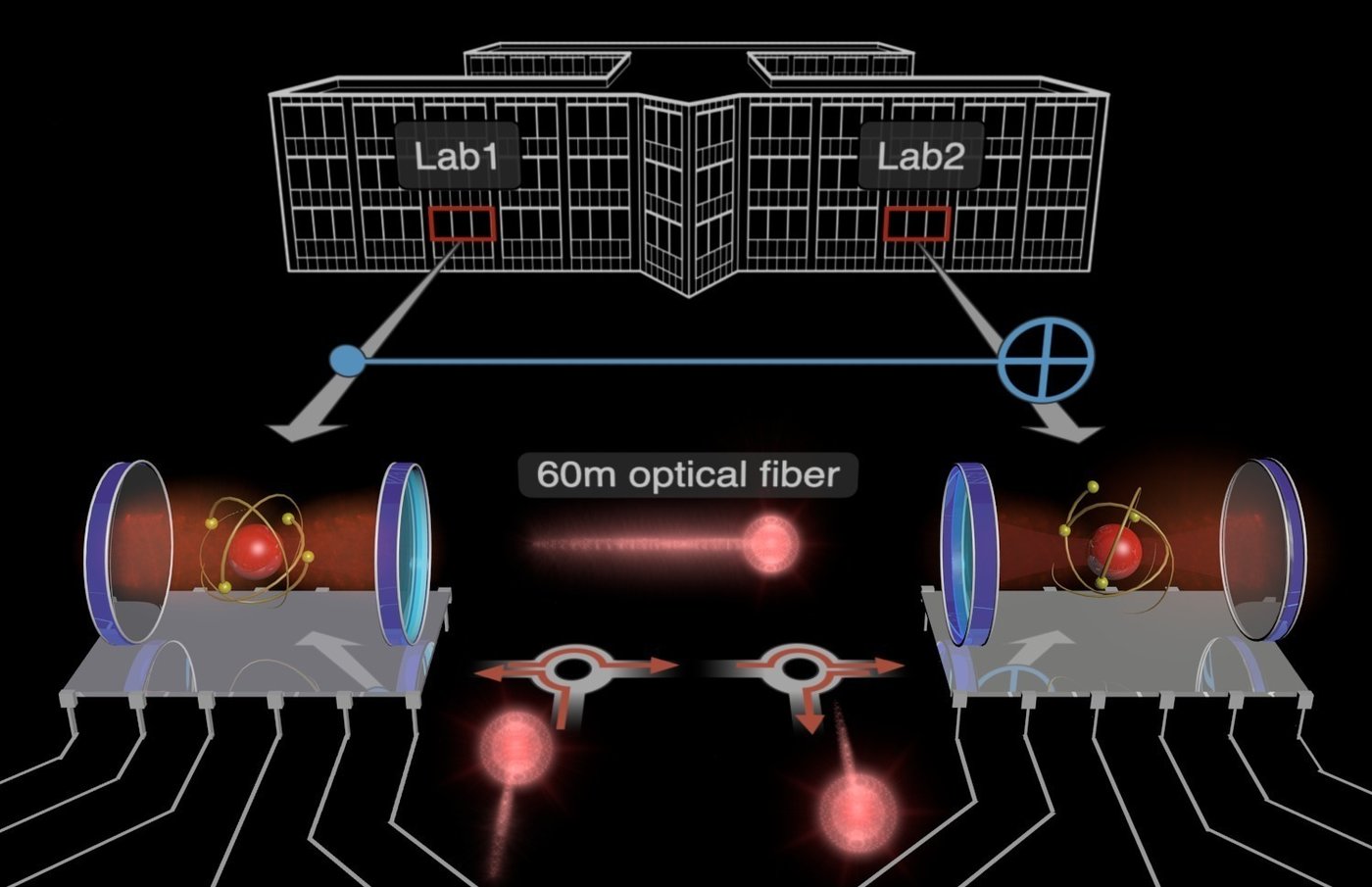 This picture shows the two qubit modules (red atom between two blue mirrors) that have been interconnected to implement a basic quantum computation (depicted as light blue symbol) over a distance of 60 meters. The modules reside in different laboratories of the same building and are connected by an optical fiber. The computation operation is mediated by a single photon (flying red sphere) that interacts successively with the two modules. Stephan Welte, Severin Daiss (MPQ)

The limitations of previous qubit architectures

Quantum computers are considerably different from traditional “binary” computers: Future realizations of them are expected to easily perform specific calculations for which traditional computers would take months or even years - for example in the field of data encryption and decryption. While the performance of binary computers results from large memories and fast computing cycles, the success of the quantum computer rests on the fact that one single memory unit – a quantum bit, also called “qubit” – can contain superpositions of different possible values at the same time. Therefore, a quantum computer does not only calculate one result at a time, but instead many possible results in parallel. The more qubits there are interconnected in a quantum computer; the more complex calculations it can perform.

The basic computing operations of a quantum computer are quantum-logic gates between two qubits. Such an operation changes – depending on the initial state of the qubits – their quantum mechanical states. For a quantum computer to be superior to a normal computer for various calculations, it would have to reliably interconnect many dozens, or even thousands of qubits for equally thousands of quantum operations. Despite great successes, all current laboratories are still struggling to build such a large and reliable quantum computer, since every additionally required qubit makes it much harder to build a quantum computer in just one single set-up. The qubits are implemented, for instance, with single atoms, superconductive elements, or light particles, all of which need to be isolated perfectly from each other and the environment. The more qubits are arranged next to one another, the harder it is to both isolate and control them from outside at the same time.

One way to overcome the technical difficulties in the construction of quantum computers is presented in a new study in the journal Science by Severin Daiss, Stefan Langenfeld and colleagues from the research group of Gerhard Rempe at the Max Planck Institute of Quantum Optics in Garching. In this work supported by the Institute of Photonic Sciences (Castelldefels, Spain), the team succeeded in connecting two qubit modules across a 60-meter distance in such a way that they effectively form a basic quantum computer with two qubits. “Across this distance, we perform a quantum computing operation between two independent qubit setups in different laboratories,” Daiss emphasizes. This enables the possibility to merge smaller quantum computers to a joint processing unit.

Simply coupling distant qubits to generate entanglement between them has been achieved in the past, but now, the connection can additionally be used for quantum computations. For this purpose, the researchers employed modules consisting of a single atom as a qubit that is positioned amidst two mirrors. Between these modules, they send one single light quanta, a photon, that is transported in the optical fiber. This photon is then entangled with the quantum states of the qubits in the different modules. Subsequently, the state of one of the qubits is changed according to the measured state of the “ancilla photon”, realizing a quantum mechanical CNOT-operation with a fidelity of 80 percent. A next step would be to connect more than two modules and to host more qubits in the individual modules. 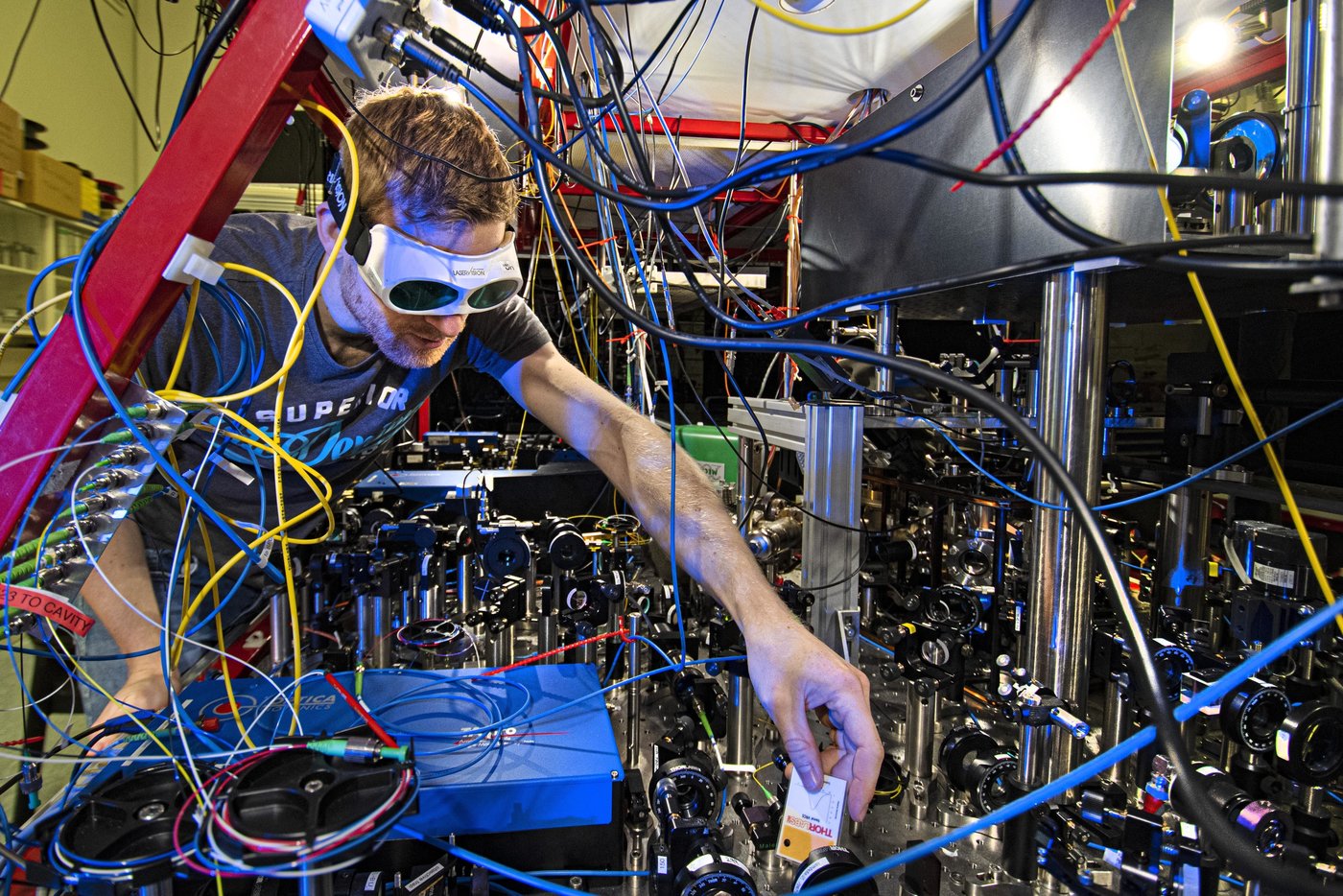 First author, Severin Daiss, in front of part one of their distributed quantum computer.

Team leader and institute director Gerhard Rempe believes the result will allow to further advance the technology: “Our scheme opens up a new development path for distributed quantum computing”. It could enable, for instance, to build a distributed quantum computer consisting of many modules with few qubits that are interconnected with the newly introduced method. This approach could circumvent the limitation of existing quantum computers to integrate more qubits into a single setup and could therefore allow more powerful systems.