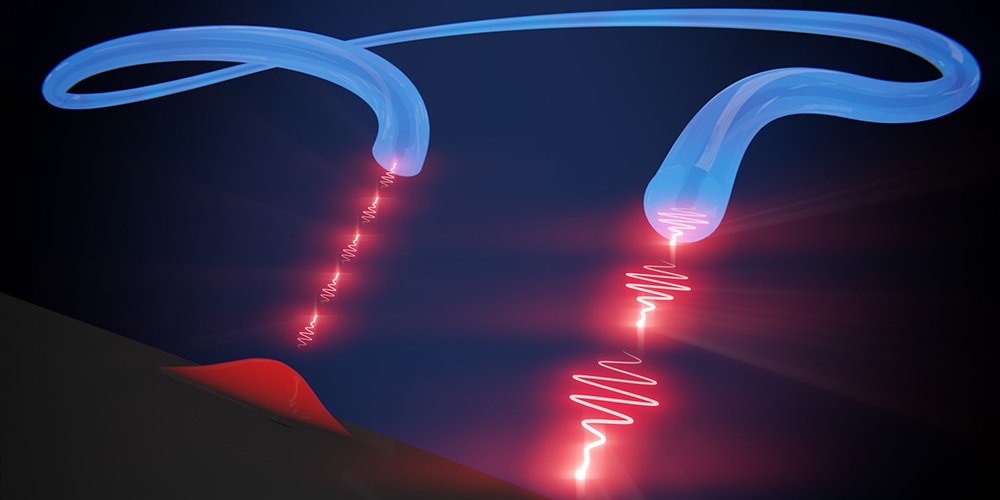 The new single-photon source is based on excitation of a quantum dot (shown as a bulge on the bottom left), which then emits photons. A micro-cavity ensures that the photons are guided into an optical fiber and emerge at its end. (Figure: University of Basel, Department of Physics)

Researchers at the University of Basel and Ruhr University Bochum have developed a source of single photons that can produce billions of these quantum particles per second. With its record-breaking efficiency, the photon source represents a new and powerful building-block for quantum technologies.

Quantum cryptography promises absolutely secure communications. A key component here are strings of single photons. Information can be stored in the quantum states of these light particles and transmitted over long distances. In the future, remote quantum processors will communicate with each other via single photons. And perhaps the processor itself will use photons as quantum bits for computing.

A basic prerequisite for such applications, however, is an efficient source of single photons. A research team led by Professor Richard Warburton, Natasha Tomm and Dr. Alisa Javadi from the University of Basel, together with colleagues from Bochum, now reports in the journal Nature Nanotechnology on the development of a single-photon source that significantly surpasses previously known systems in terms of efficiency.

Each photon is created by exciting a single “artificial atom” (a quantum dot) inside a semiconductor. Usually, these photons leave the quantum dot in all possible directions and thus a large fraction is lost. In the photon source now presented, the researchers have solved this problem by positioning the quantum dot inside a "funnel" to send all photons in a specific direction.

The efficiency of the entire system – that is, the probability that excitation of the quantum dot actually results in a usable photon – is 57 percent, more than double that of previous single-photon sources. “This is a really special moment,” explains lead author Richard Warburton. “We’ve known for a year or two what’s possible in principle. Now we’ve succeeded in putting our ideas into practice.”

The increase in efficiency has significant consequences, Warburton adds: “increasing the efficiency of single photon creation by a factor of two adds up to an overall improvement of a factor of one million for a string of, say, 20 photons. In the future, we’d like to make our single-photon source even better: We’d like to simplify it and pursue some of its myriad applications in quantum cryptography, quantum computing and other technologies."

The project was funded by the Swiss National Science Foundation, the National Center of Competence in Research “Quantum Science and Technology” (NCCR QSIT), and the European Union under the Horizon2020 programme.