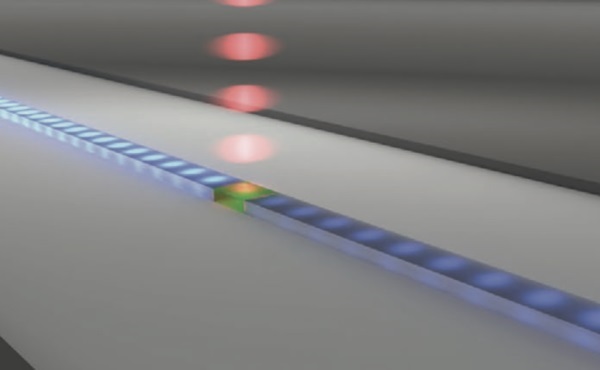 Schematic view of the pump-probe experiment, showing 1550 nm femtosecond pulses (bright blue) injected into the waveguide from the left and the gating femtosecond pulses (red) at 1670 nm illuminating the embedded VO2 segment (green) from above. The attenuated pulses (faded blue) propagate to a detector (not shown). (Weiss, Haglund, et.al).

Vanderbilt researchers have developed the next generation of ultrafast data transmission that may make it possible to make already high-performance computing “on demand.” The technology unjams bottlenecks in data streams using a hybrid silicon-vanadium dioxide waveguide that can turn light on and off in less than one trillionth of a second.

The article, “Sub‐Picosecond Response Time of a Hybrid VO2: Silicon Waveguide at 1550 nm” was published in the journal Advanced Optical Materials on Dec. 4.

Collaborators Sharon Weiss, Cornelius Vanderbilt Chair and professor of electrical engineering, physics, and materials science and engineering, and Richard Haglund, Stevenson Professor of Physics, are the first to demonstrate that it may be possible to achieve data rates exceeding one terabit per second on a single channel. They created a hybrid silicon chip by including a small amount of vanadium dioxide—an ultrafast‐switching phase‐change material—to extend the capabilities of silicon photonics.

Light pulses were injected into a silicon waveguide were selectively turned off when another light pulse struck the vanadium dioxide. The remarkable speed with which the light pulses were turned off and then came back on is a consequence of the material properties of vanadium dioxide and the time duration in which the two laser pulses interact in the vanadium dioxide. The silicon waveguides were fabricated at the Center for Nanophase Materials Sciences at Oak Ridge National Laboratory as part of their Department of Energy sponsored User Program. The incorporation of vanadium dioxide was carried out at the Vanderbilt Institute of Nanoscale Science and Engineering.

“Our long-term collaboration—sparked by a conversation between two graduate students in the VINSE cleanroom—has resulted in the demonstration of ultrafast optical switching using a silicon waveguide,” said Weiss, also director of VINSE. “It means that we can turn light on and off very quickly while it is traveling on an information highway smaller than the thickness of your hair that is made of the same material inside computers and cellphones.”

Silicon photonics uses light pulses instead of electrical current pulses to transfer large quantities of data as information bits (0s and 1s). Data can be encoded into light pulses, which travel across an optic fiber. When the light pulse reaches its destination, photodetectors convert the light back into an electronic data signal. This approach has significantly upgraded the processing speed and computing power of computers since research in silicon photonics began in the late 1980s. Now that nearly every part of daily life has an online or digital component, improving optical computing technology is of significant interest to commercial and industrial technology firms.

“We can turn light on and off faster than anyone else using this information highway, which means that future computers may be able to run a lot faster, and also with less power than current computers, by using light,” Haglund said.

Weiss and Haglund say the next steps toward practical implementation of this game-changing innovation will be to optimize the size, shape and volume of the vanadium dioxide component and to investigate alternate configurations of the hybrid waveguide.

The research was supported by the National Science Foundation grant EECS 1509740.