Novel Implementation of Metrology Technique Amplifies it to New Heights 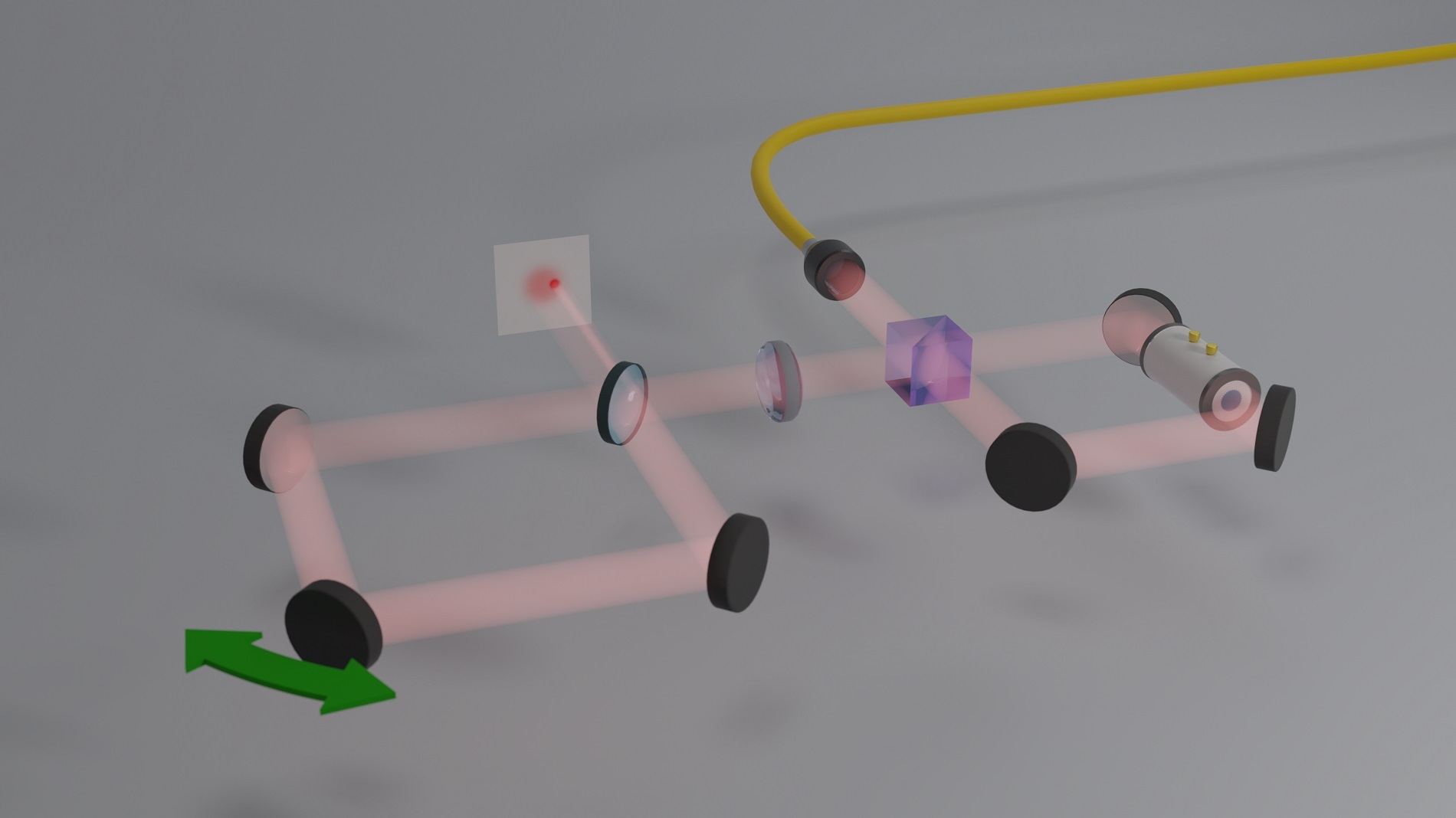 Diagram of experimental set-up. Photons (pink) enter through the fiber optic cable (yellow) before passing through a polarizing beamsplitter (purple). The photons are directed through the interferometric loop on the left, which contains a tilting mirror (green). A small fraction of the photons leak out of the exit port (gray square), where WVA interference yields a measurable angular displacement. The rest of the photons are directed to the recycling loop on the right, where a Pockels cell (white cylinder) reintroduces these photons to the interferometric loop by rotating their polarization. Photo by: Benjamin Nussbaum

Weak-value amplification (WVA) is a commonly used technique in metrology—the study of measurement—that has attracted much recent attention for its promising applications in quantum sensing. First described in 1988 by Aharonov, Albert, and Vaidman, WVA allows scientists to precisely measure extremely small values—or variations in these values—of some quantity of interest, by interfering two quantum states and observing the resulting interference pattern. This technique has a variety of uses, from direct spatial measurements, such as those of velocity or angular displacement, to more exotic ones, such as variations in temperature, chemical concentration, or magnetic field strength.

One great advantage of WVA is that it can be used to minimize many systematic errors that could creep into scientific experiments. Unfortunately, there is a stark trade-off in the quantum experimental setting: amplification of the desired quantity is always offset by a corresponding decrease in the number of detected events. In a quantum optics context, this trade-off manifests as a decrease in detected photon count rate. In a recent paper, physicists at the University of Illinois Urbana-Champaign and their colleagues have experimentally overcome this trade-off without sacrificing photon count rate, by modifying conventional WVA to include a novel photon recycling scheme.

“WVA has potential applications in the fields of chemistry, biology, precision engineering—basically any area that relies on precise optical measurements,” says Dr. Courtney Krafczyk, lead author of the new study. Krafczyk, who performed the work as part of her dissertation in the research group of University of Illinois Urbana-Champaign Professor of Physics Paul Kwiat, continues, “We wanted to see if we could improve existing methods that only treat a small fraction of the photons used as ‘special’ to enhance resolution. In our new scheme, in principle all the photons become special.”

These results were published June 1, 2021, in Physical Review Letters in the article "Enhanced Weak-Value Amplification via Photon Recycling."

WVA can be broken down into three stages. In the first stage, pre-selection, a particular quantum superposition state is prepared. In the second stage, a weak interaction couples the effect to be measured with the terms in the superposition state. In the final stage, post-selection, nearly all the photons in the pre-selected quantum state are filtered out, yielding an interference pattern that amplifies the weak perturbation, but only for the few photons that were not discarded in the filtering of stage three. This filtering results in a greatly reduced number of detected events. The upshot is that the amplification benefit of conventional WVA is exactly canceled by the reduced number of photons, and there is no net improvement to detection precision if the number of input photons is taken as the limiting resource.

To circumvent this loss, the researchers employed a clever scheme that recycles the discarded photons.

Kwiat explains, “We realized that the discarded photons were in nearly the same quantum state that they started in. Therefore, these photons could be reused—or recycled—in multiple WVA realizations, until eventually all of them—in the absence of loss—were indeed successfully post-selected and detected. In

this way, the usual limitation of WVA is avoided, and we gain a genuine sensitivity enhancement, even in systems with negligible systematic errors.”

To illustrate this amplification scheme, the Illinois experimenters measured tilts of a light beam. First,

for pre-selection, they used a beam-splitter to prepare a light beam in a superposition of two counter-propagating beams in an interferometric loop (see left side of image). Second, they slightly tilted a

mirror contained within the interferometer to provide the beam deflection that they wished to measure. Finally, for the post-selection, the researchers combined the counter-propagating beams into a single beam and measured its position at a point beyond the interferometer (gray square in image).

A remarkable feature of this experiment is that the mirror tilts were exceptionally small: down to 100 nanoradians. Truman State University Professor Mike Goggin, a contributor to the project, explains, “The angles we measured were similar in scale to the width of a human hair one kilometer away; and were 10,000 times smaller than the angular spread of the light beam used in the experiment!”

At the point of measurement, only a fraction of the photons were detected; the rest of the photons were recycled again using a secondary loop that redirected the photons back into the interferometer. After multiple recycling attempts—up to 27—about four times more photons experienced WVA than would have without recycling. This method enabled the researchers to measure tilts about twice as small as would have been possible using conventional, non-recycling WVA.

The researchers note that photons are inevitably lost through unwanted scattering and absorption as they travel through the current set-up, limiting its performance. In spite of this, the recycling enhancements represent a significant improvement over previous WVA methods and demonstrate the feasibility of this modified WVA technique in quantum metrology. Moreover, the researchers estimate that the sensitivity enhancement factor could exceed an order of magnitude with further improvements.

Kwiat sums up, “WVA has interested researchers because of its potential for precision metrology at the quantum limit, even in the presence of systematic noise. Yet standard WVA has fallen short of this goal because only a small fraction of the photons are measured. What this proof-of-principle experiment shows is that it’s possible to use many more of the photons, thereby achieving an enhanced sensitivity beyond the standard quantum limit. And with improvements in the experimental design—more efficient recycling—the final sensitivity should be similarly enhanced.”

University of Rochester Professor Andrew Jordan, the main theorist on the project, comments, “Although we chose to measure angular deflections, in principle, our modified recycling WVA technique could additionally be adapted to a wider variety of measurements by appropriate adjustments to the experimental design. This could include changing the interferometer design to measure polarization tilts, phase shifts, or Doppler shifts.”

Jordan further points out that, although the team uses the language of photons and quantum superpositions to describe the WVA phenomenon, this particular sort of implementation has a classical analog, which means it should be considered a “quantum-inspired” measurement technique.

“On the bright side, that means it can be applied in a much wider range of applications,” says Jordan, “without needing quantum light sources or single-photon detectors.”

Krafczyk concludes, “These experimental results have opened the door to an array of possibilities in the field of metrology. We hope they’ll stimulate other research groups to improve the technique even further and find even more applications.”

This research was funded by the U.S. Army Research Office and by the National Science Foundation. The conclusions presented are those of the researchers and not necessarily those of the funding agency.