Nanosphere at the quantum limit 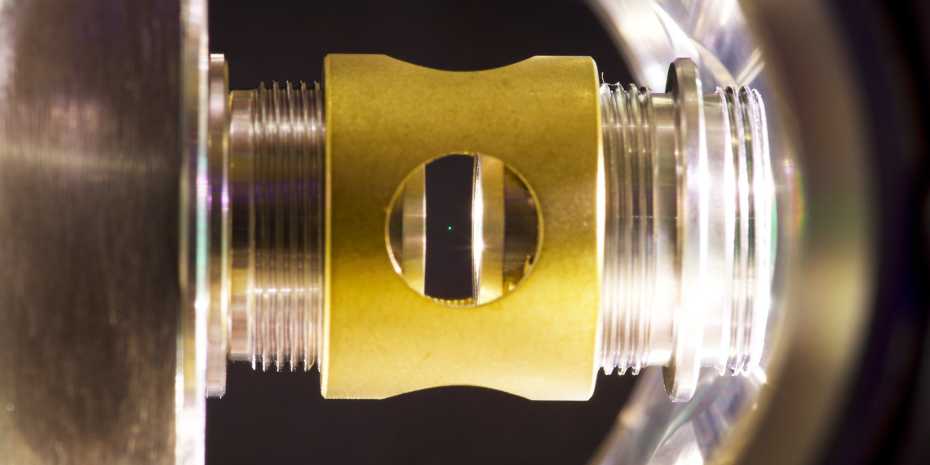 A glass sphere a hundred nanometres in diameter (green dot in the centre of the picture) is made to hover by a tightly focused laser beam. (Photograph: ETH Zurich)

Researchers at ETH Zurich have trapped a tiny sphere measuring a hundred nanometres using laser light and slowed down its motion to the lowest quantum mechanical state. Based on this, one can study quantum effects in macroscopic objects and build extremely sensitive sensors.

Why can atoms or elementary particles behave like waves according to quantum physics, which allows them to be in several places at the same time? And why does everything we see around us obviously obey the laws of classical physics, where that is impossible? To answer those questions, in recent years researchers have coaxed larger and larger objects into behaving quantum mechanically. One consequence of this is that, when passing through a double slit, they form an interference pattern that is characteristic of waves.

Up to now this could be achieved with molecules consisting of a few thousand atoms. However, physicists hope one day to be able to observe such quantum effects with properly macroscopic objects. Lukas Novotny, Professor of Photonics, and his collaborators at the Department of Information Technology and Electrical Engineering at ETH Zurich have now made a crucial step in that direction. Their results were recently published in the scientific journal Nature.

The macroscopic object in Novotny’s laboratory is a tiny sphere made of glass. Although it is only a hundred nanometres in diameter, it consists of as many as ten million atoms. Using a tightly focused laser beam, the sphere is made to hover in an optical trap inside a vacuum container cooled down to 269 degrees below zero. The lower the temperature, the smaller is the thermal motion. “However, to clearly see quantum effects the nanosphere needs to be slowed down even more, all the way to its motional ground state”, explains Felix Tebbenjohanns, a postdoc in Novotny’s lab. The oscillations of the sphere, and hence its motional energy, are reduced to the point where the quantum mechanical uncertainty relation forbids a further reduction. “This means that we freeze the motional energy of the sphere to a minimum that is close to the quantum mechanical zero-​point motion”, Tebbenjohanns says. 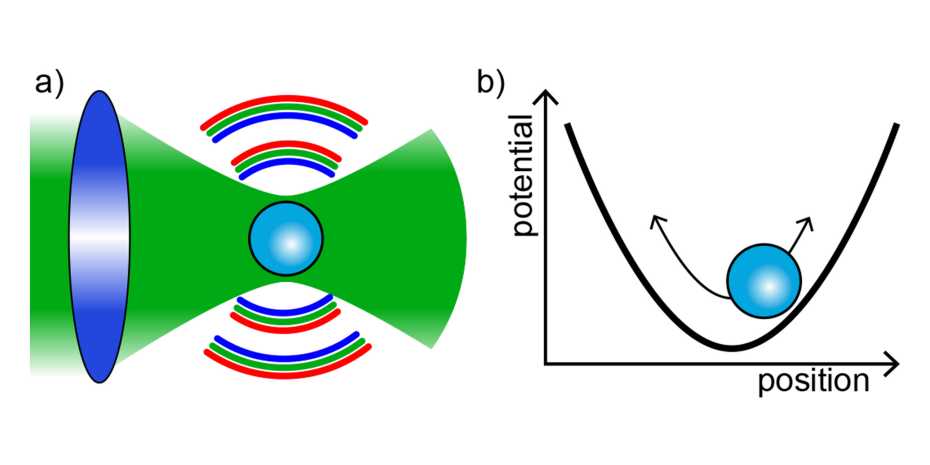 A nanosphere is made to hover by focused laser light (a). The laser light acts as a trap in which the sphere can oscillate back and forth (b). Electric fields are used to slow down that motion. (Visualization: ETH Zurich)

Measuring and slowing down

To achieve this, the researchers use a method that is well-​known from slowing down a playground swing: just the right amount of pushing or pulling in the right direction, depending on where the swing happens to be. With a swing, taking a good look and acting accordingly will do the trick. In the case of a nanosphere, however, a more precise measurement has to be made. This measurement consists in superimposing the light reflected by the sphere onto another laser beam, which results in an interference pattern. From the position of that interference pattern it is possible to deduce where the sphere is located inside the laser trap. That information, in turn, is used to calculate how strongly the sphere has to be pushed or pulled in order to slow it down. The slowing itself is done by two electrodes, whose electric field exerts a precisely determined Coulomb force on the electrically charged nanosphere.

“This is the first time that such a method has been used to control the quantum state of a macroscopic object in free space”, Novotny points out. Even though similar results have been obtained with spheres in optical resonators, Novotny’s approach has important advantages: it is less susceptible to disturbances, and by switching off the laser light one can, if required, examine the sphere in complete isolation.

Such an isolated examination becomes particularly relevant when trying to actually perform interference experiments, like those observed with light waves, with the nanosphere. This is because in order to see interference effects, the quantum mechanical wave of the sphere needs to be sufficiently large. One way to achieve this is to switch off the laser trap after cooling the sphere to its motional ground state, which allows its quantum wave to expand freely. Different parts of the wave can then fall through a double slit. As with molecules, also in this case the superposition of the matter waves is expected to result in a characteristic interference pattern.

“For now, however, that’s just a pipe dream”, Novotny cautions. Still, he also mentions that hovering nanospheres are of interest not only to basic research, but can also have practical applications. Nowadays there are already sensors that can measure the tiniest accelerations or rotations by using interfering atomic waves. As the sensitivity of such sensors increases with increasing mass of the quantum mechanically interfering object, the sensors could be immensely improved with nanospheres.