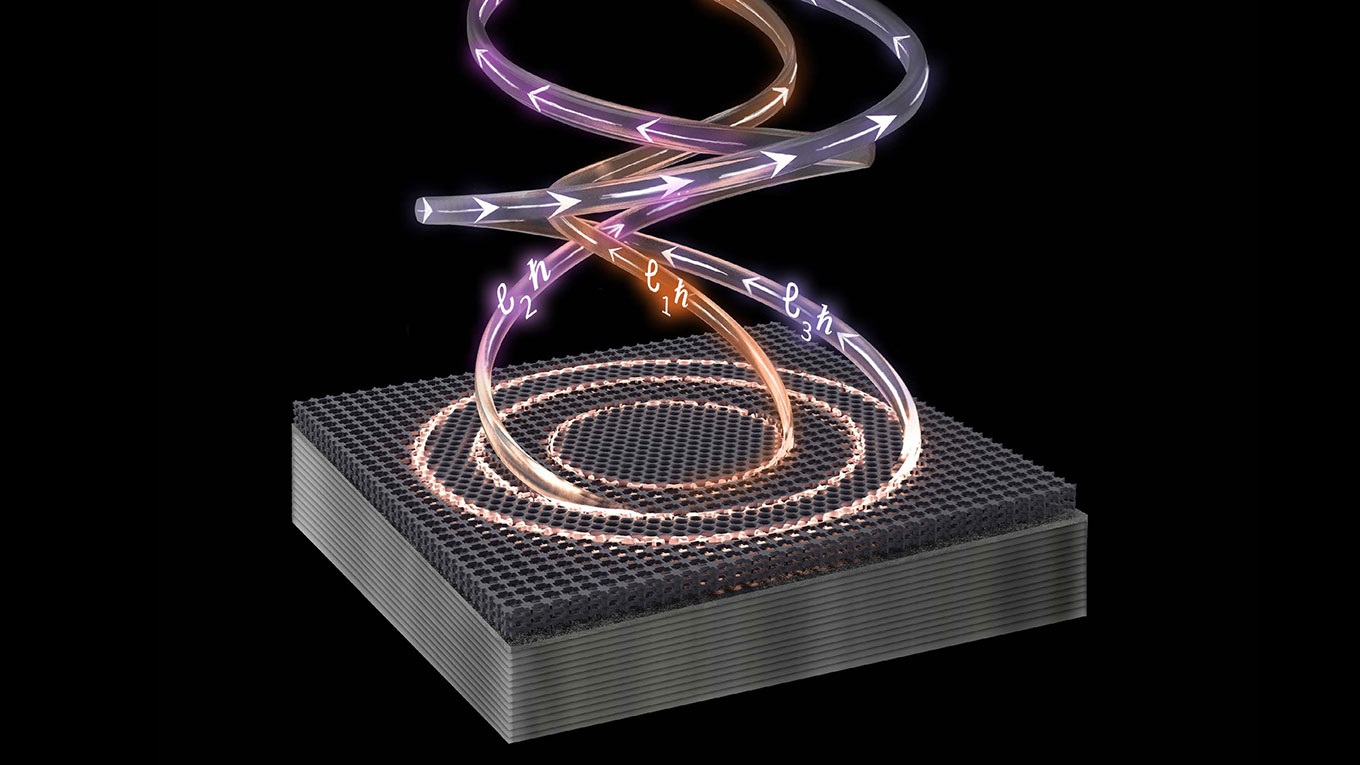 Researchers at the University of California, Berkeley, have found a new way to harness properties of light waves that can radically increase the amount of data they carry. They demonstrated the emission of discrete twisting laser beams from antennas made up of concentric rings roughly equal to the diameter of a human hair, small enough to be placed on computer chips.

The new work, reported in a paper published Feb. 25 in the journal Nature Physics, throws wide open the amount of information that can be multiplexed, or simultaneously transmitted, by a coherent light source. A common example of multiplexing is the transmission of multiple telephone calls over a single wire, but there had been fundamental limits to the number of coherent twisted light waves that could be directly multiplexed.

“It’s the first time that lasers producing twisted light have been directly multiplexed,” said study principal investigator Boubacar Kanté, the Chenming Hu Associate Professor in UC Berkeley’s Department of Electrical Engineering and Computer Sciences. “We’ve been experiencing an explosion of data in our world, and the communication channels we have now will soon be insufficient for what we need. The technology we are reporting overcomes current data capacity limits through a characteristic of light called the orbital angular momentum. It is a game-changer with applications in biological imaging, quantum cryptography, high-capacity communications and sensors.”

Kanté, who is also a faculty scientist in the Materials Sciences Division at Lawrence Berkeley National Laboratory (Berkeley Lab), has been continuing this work at UC Berkeley after having started the research at UC San Diego. The first author of the study is Babak Bahari, a former Ph.D. student in Kanté’s lab.

Kanté said that current methods of transmitting signals through electromagnetic waves are reaching their limit. Frequency, for example, has become saturated, which is why there are only so many stations one can tune into on the radio. Polarization, where light waves are separated into two values — horizontal or vertical — can double the amount of information transmitted. Filmmakers take advantage of this when creating 3D movies, allowing viewers with specialized glasses to receive two sets of signals — one for each eye — to create a stereoscopic effect and the illusion of depth.

Harnessing the potential in a vortex

But beyond frequency and polarization is orbital angular momentum, or OAM, a property of light that has garnered attention from scientists because it offers exponentially greater capacity for data transmission. One way to think about OAM is to compare it to the vortex of a tornado.

“The vortex in light, with its infinite degrees of freedom, can, in principle, support an unbounded quantity of data,” said Kanté. “The challenge has been finding a way to reliably produce the infinite number of OAM beams. No one has ever produced OAM beams of such high charges in such a compact device before.”

The researchers started with an antenna, one of the most important components in electromagnetism and, they noted, central to ongoing 5G and upcoming 6G technologies. The antennas in this study are topological, which means that their essential properties are retained even when the device is twisted or bent.

To make the topological antenna, the researchers used electron-beam lithography to etch a grid pattern onto indium gallium arsenide phosphide, a semiconductor material, and then bonded the structure onto a surface made of yttrium iron garnet. The researchers designed the grid to form quantum wells in a pattern of three concentric circles — the largest about 50 microns in diameter — to trap photons. The design created conditions to support a phenomenon known as the photonic quantum Hall effect, which describes the movement of photons when a magnetic field is applied, forcing light to travel in only one direction in the rings.

By applying a magnetic field perpendicular to their two-dimensional microstructure, the researchers successfully generated three OAM laser beams traveling in circular orbits above the surface. The study further showed that the laser beams had quantum numbers as large as 276, referring to the number of times light twists around its axis in one wavelength.

“Having a larger quantum number is like having more letters to use in the alphabet,” said Kanté. “We’re allowing light to expand its vocabulary. In our study, we demonstrated this capability at telecommunication wavelengths, but in principle, it can be adapted to other frequency bands. Even though we created three lasers, multiplying the data rate by three, there is no limit to the possible number of beams and data capacity.”

Kanté said the next step in his lab is to make quantum Hall rings that use electricity as power sources.

This research was primarily supported by the Office of Naval Research, the National Science Foundation and Berkeley Lab’s Laboratory Directed Research and Development Program.