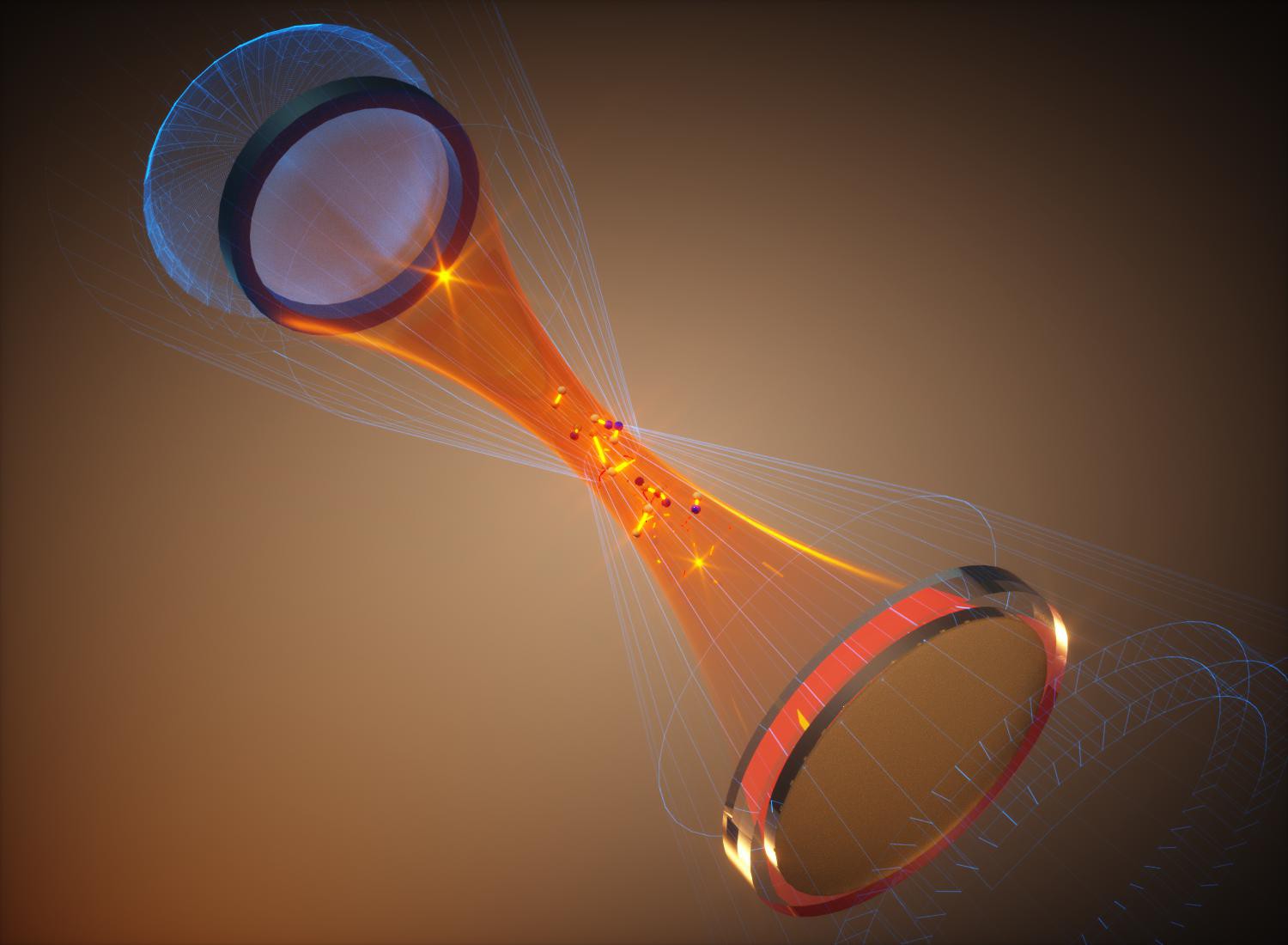 Image: A collection of atom pairs inside an optical cavity formed by a pair of mirrors facing each other. The light trapped between the mirrors turns pairs of atoms into molecules in a coherent way. Credit: Ella Maru studio.

Physicists at EPFL have found a way to get photons to interact with pairs of atoms for the first time. The breakthrough is important for the field of cavity quantum electrodynamics (QED), a cutting-edge field leading the way to quantum technologies.

There is no doubt that we are moving steadily toward an era of technologies based on quantum physics. But to get there, we first have to master the ability to make light interact with matter – or more technically, photons with atoms.

This has already been achieved to some degree, giving us the cutting-edge field of cavity quantum electrodynamics (QED), which is already used in quantum networks and quantum information processing. Nonetheless, there are still a long way to go. Current light-matter interactions are limited to individual atoms, which limits our ability to study them in the sort of complex systems involved in quantum-based technologies.

In a paper published in Nature, researchers from the group of Jean-Philippe Brantut at EPFL’s School of Basic Sciences have found a way to get photons to ‘mix’ with pairs of atoms at ultra-low temperatures.

The researchers used what is known as a Fermi gas, a state of matter made of atoms that resembles that of electrons in materials. “In the absence of photons, the gas can be prepared in a state where atoms interact very strongly with each other, forming loosely bound pairs,” explains Brantut. “As light is sent onto the gas, some of these pairs can be turned into chemically bound molecules by absorbing with photons.”

A key concept in this new effect is that that it happens “coherently”, which means that photon can be absorbed to turn a pair of atoms into a molecule, then emitted back, then reabsorbed multiple times. “This implies the pair-photon system forms a new type of ‘particle’ – technically an excitation – which we call ‘pair-polariton’,” says Brantut. “This is made possible in our system, where photons are confined in an ‘optical cavity’ – a closed box that forces them to interact strongly with the atoms.”

“Some of the very intricate properties of the gas are translated onto optical properties, which can be measured in a direct way, and even without perturbing the system,” says Brantut. “A future application would be in quantum chemistry, since we demonstrate that some chemical reactions can be coherently produced using single photons.”