Increasing the accuracy of atomic clocks 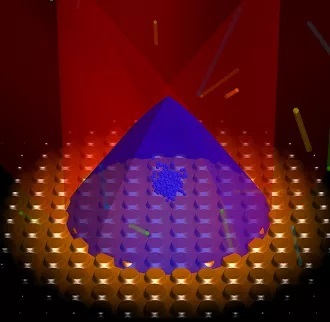 Innovative techniques in the miniaturisation of optical atomic clocks are being developed in research involving the University of Strathclyde.

The new clock technology will help improve the location accuracy of Global Navigation Satellite Systems (GNSS), as well as addressing the scalability of other quantum technologies.

Atomic clocks are the ultimate timekeepers, with the state-of-the-art instruments providing a timing accuracy that would neither gain nor lose a second in over 30 million years. Due to the high level of accuracy in these instruments, atomic clocks are used to coordinate systems that require extreme precision, such as GNSS.

Each satellite network contains multiple atomic clocks that contribute precision timing data, which is decoded to provide location data by effectively synchronising each receivers’ atomic clocks with those of the satellite. Cold atomic samples have led to profound advancements in precision metrology by measuring the frequency separation of discrete atomic energy levels.

Strathclyde’s role in the research will be to design the gMOT (grating magneto-optical trap), on to which laser light will be delivered, for the clocks. Nanofabrication company Kelvin Nanotechnology is leading in the project, in which the University of Birmingham and product design company Wideblue are also partners.

Dr Paul Griffin, Senior Lecturer in Strathclyde’s Department of Physics and the University’s lead researcher for the project, said: “This project is tackling head on the difficult problem of taking research-grade technology from the laboratory and into practicable and scalable quantum devices.

“Atoms with complex internal structure, such as strontium and ytterbium, enable tremendous advances in the sensitivity of quantum-enabled measurements of time and gravity. Over the last decade, our team at Strathclyde has shown how the technology for laser cooling alkali atoms can be reduced down to a simple handheld device powered from a single battery.“

“Now, working closely with our partners, we are developing new tools for laser cooling and manipulation of strontium atoms. Our goal is that in five years’ time, the core hardware for ultra-cold strontium atoms will be an off-the-shelf component, which would be transformative for not only timing but also applications like quantum computing.”

Dr James McGilligan from Kelvin Nanotechnology said: “Atomic clocks are an integral component in modern technology and impact our daily routines, from computing and financial transactions to the navigation systems we use in our phones and cars.

“As state-of-the-art atomic clocks push new boundaries in precision measurement, we face a new challenge of bringing this complex and large physical apparatus into a compact and user-friendly system where we can make the largest societal and economic impact. Our current collaboration aims to address the scalability of one such atomic clock by reducing the optical constraints into scalable micro-fabricated components, as a critical step to bringing laboratory performance out into real world applications.”

To achieve such high timing resolution, the atomic clock makes use of ultra-narrow transitions in strontium atoms, providing orders of magnitude of better performance than their rubidium counterparts, owing to narrower atomic features. In simple terms, the narrower the atomic transition, the more accurate the atomic clock.

The gMOT was invented at Strathclyde by Dr Griffin and colleagues Dr Aidan Arnold and Prof Erling Riis, who are co-investigators on this project. The gMOT is now the focus of research internationally for ultra-compact devices for laser cooling.

The University of Strathclyde is the only academic institution that has been a partner in all four EPSRC funded Quantum Technology Hubs in both phases of funding. The Hubs are in: Sensing and Timing; Quantum Enhanced Imaging; Quantum Computing and Simulation, and Quantum Communications Technologies.

A Quantum Technology Cluster is to be embedded in the Glasgow City Innovation District, an initiative driven by Strathclyde along with Glasgow City Council, Scottish Enterprise, Entrepreneurial Scotland and Glasgow Chamber of Commerce. It is envisaged as a global place for quantum industrialisation, attracting companies to co-locate, accelerate growth, improve productivity and access world-class research technology and talent at Strathclyde.