Widening the range of colours step by step 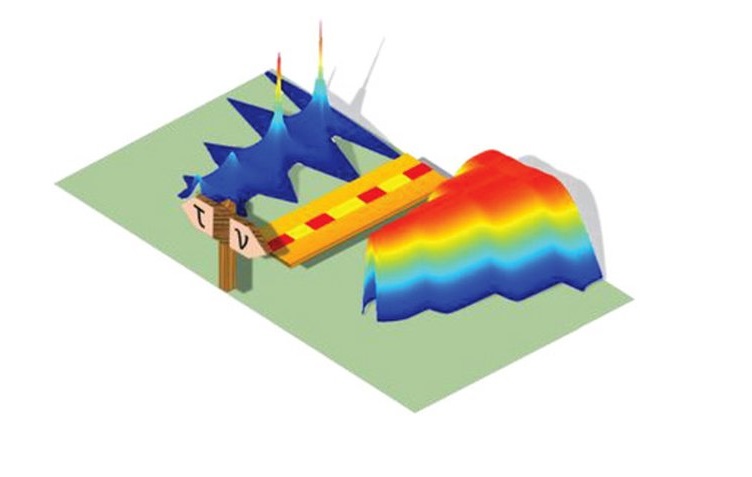 By sending the laser light through a combination of materials (indicated red and yellow rectangles), laser pulse duration and bandwidth are influenced alternately. By doing so, the peak power of the laser is guaranteed and no excessively high power is needed.

A wide range of colours, a so-called ‘supercontinuum’, made from a laser bundle that is narrow by itself, is very attractive. In an autonomously driving car, for example, the object recognition using a LIDAR system is possible thanks to a supercontinuum. Most techniques for creating a supercontinuum, however, encounter problems. Simply enlarging the laser power often doesn’t solve these. Scientists of the University of Twente now present an approach that avoids losing the peak power of the laser. The colour range therefore is expanded step by step. They publish about it in ‘Laser & Photonics Reviews’.

Thinking of a laser, we probably imagine a bundle of light that is highly concentrated and of one colour; most people will think of red light. Could we turn this into a wide range of colours? This is the challenging field of nonlinear optics. It sounds a bit contradictory, as if you turn the ‘sharpness’ of a laser into a wide range. But the availability of a wide range of colours, at high intensities, has many advantages as well. In medical research, it is possible to analyse the constituents of a sample (‘soft X-Ray’). In LIDAR (laser imaging detection and ranging), the technique used in future autonomous cars, various obstacles can be discovered over a wide range of distances thanks to the range of colours.

The problem, so far, is the laser power needed. The UT researchers found a remedy for this: they demonstrate good results, using less laser power, and without the need of expensive lasers or materials. The main problem is that the performance stagnates. As the laser pulse takes a longer time, the actual laser power diminishes and further widening of the bandwidth is stopped. Pumping more laser power into it,  could lead to damaging the material or even blowing up an optical waveguide structure.

For this reason, the UT researchers alternately send the laser light through two types of materials. The ‘regular’ material will widen the spectrum, the second material will give the laser some time to recover and reach its peak power again. By doing so, they build a supercontinuum that is much more stable and efficient.

The research has been done in the Laser Physics and Nonlinear Optics group of Professor Klaus Boller. The group is part of the MESA+ Institute of the University of Twente.