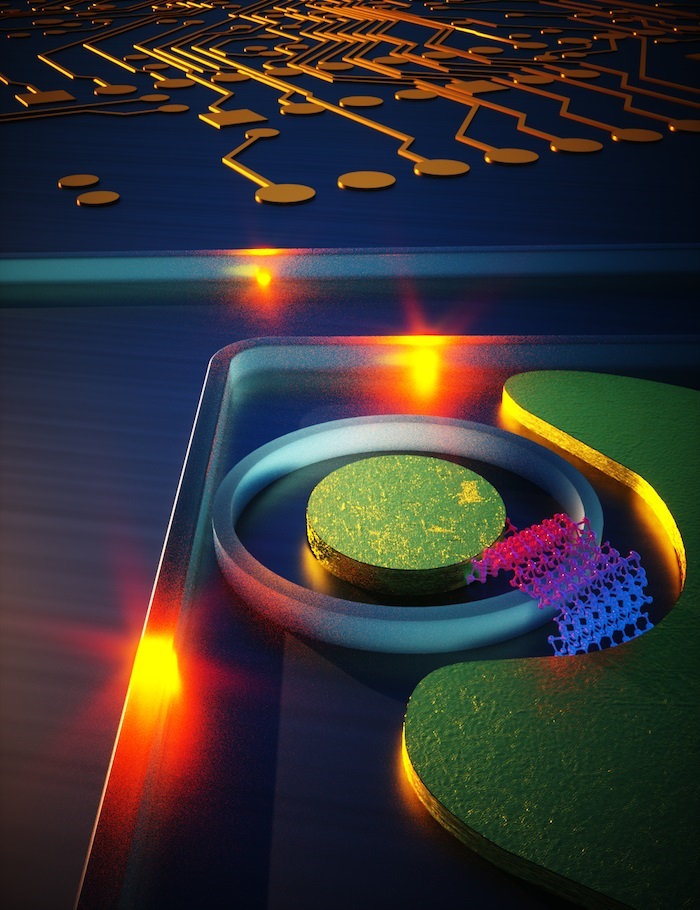 SUMMARY
Researchers discovered a new way to engineer optoelectronic devices by stretching a two-dimensional material on top of a silicon photonic platform. Using this method, coined strainoptronics by a team led by George Washington University professor Volker Sorger, the researchers demonstrated for the first time that a 2D material wrapped around a nanoscale silicon photonic waveguide creates a novel photodetector that can operate with high efficiency at the technology-critical wavelength of 1550 nanometers.

Such new photodetection can advance future communications and computer systems, especially in emerging areas such as machine learning and artificial neural networks.

THE SITUATION
The ever-increasing data demand of modern societies requires a more efficient conversion of data signals in the optical domain, from fiber optic internet to electronic devices, like a smartphone or laptop. This conversion process from optical to electrical signals is performed by a photodetector, a critical building block in optical networks.

2D materials have scientific and technologically relevant properties for photodetectors. Because of their strong optical absorption, designing a 2D material-based photodetector would enable an improved photo-conversion, and hence more efficient data transmission and telecommunications. However, 2D semiconducting materials, such as those from the family of transition metal dichalcogenides, have, so far, been unable to operate efficiently at telecommunication wavelengths because of their large optical bandgap and low absorption.

THE SOLUTION
Strainoptronics provides a solution to this shortcoming and adds an engineering tool for researchers to modify the electrical and optical properties of 2D materials, and thus the pioneered 2D material-based photodetectors.

Realizing the potential of strainoptronics, the researchers stretched an ultrathin layer of molybdenum telluride, a 2D material semiconductor, on top of a silicon photonic waveguide to assemble a novel photodetector. They then used their newly created strainoptronics “control knob” to alter its physical properties to shrink the electronic bandgap, allowing the device to operate at near infrared wavelengths, namely at the telecommunication (C-band) relevant wavelength around 1550 nm.

The researchers noted one interesting aspect of their discovery: the amount of strain these semiconductor 2D materials can bear is significantly higher when compared to bulk materials for a given amount of strain. They also note these novel 2D material-based photodetectors are 1,000 times more sensitive compared to other photodetectors using graphene. Photodetectors capable of such extreme sensitivity are useful not only for data communication applications but also for medical sensing and possibly even quantum information systems.

FROM THE RESEARCHERS
“We not only found a new way to engineer a photodetector, but also discovered a novel design methodology for optoelectronic devices, which we termed ‘strainoptronics.’ These devices bear unique properties for optical data communication and for emerging photonic artificial neural networks used in machine learning and AI.”
- Volker Sorger, associate professor of electrical and computer engineering at GW

“Interestingly, unlike bulk materials, two-dimensional materials are particularly promising candidates for strain engineering because they can withstand larger amounts of strain before rupture. In the near future, we want to apply strain dynamically to many other two-dimensional materials in the hopes of finding endless possibilities to optimize photonic devices.”
- Rishi Maiti, postdoctoral fellow in the electrical and computer engineering department at GW

OTHER INFORMATION
The journal Nature Photonics will publish the paper, “Strain-Engineered High Responsivity MoTe2 Photodetector for Silicon Photonic Integrated Circuits,” on Monday, June 22. The research team also included researchers at the University of Pennsylvania, University of Texas, University of Minnesota and Ghent University.

This technology is covered by several patent applications and is available for licensing (U.S. patent app. 62/938,116).