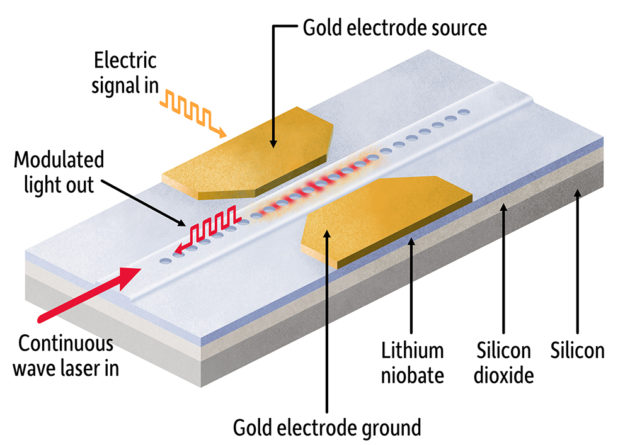 A schematic drawing shows an electro-optical modulator developed in the lab of Qiang Lin, professor of electrical and computer engineering. The smallest such component yet developed, it takes advantage of lithium niobate, a “workhorse” material used by researchers to create advanced photonics integrated circuits. (University of Rochester illustration / Michael Osadciw)

But they’re not yet small enough to compete in computing and other applications where electric circuits continue to reign.

Electrical engineers at the University of Rochester believe they’ve taken a major step in addressing the problem. Using a material widely adopted by photonics researchers, the Rochester team has created the smallest electro-optical modulator yet. The modulator is a key component of a photonics-based chip, controlling how light moves through its circuits.

In Nature Communications, the lab of Qiang Lin, professor of electrical and computer engineering, describes using a thin film of lithium niobate (LN) bonded on a silicon dioxide layer to create not only the smallest LN modulator yet, but also one that operates at high speed and is energy efficient.

Because of its outstanding electro-optic and nonlinear optic properties, lithium niobate has “become a workhorse material system for photonics research and development,” Lin says. “However current LN photonic devices, made upon either bulk crystal or thin-film platform require large dimensions and are difficult to scale down in size, which limits the modulation efficiency, energy consumption, and the degree of circuit integration. A major challenge lies in making high-quality nanoscopic photonic structures with high precision.”

The modulator project builds upon the lab’s previous use of lithium niobate to create a photonic nanocavity—another key component in photonic chips. At only about a micron in size, the nanocavity can tune wavelengths using only two to three photons at room temperature—“the first time we know of that even two or three photons have been manipulated in this way at room temperatures,” Lin says. That device was described in a paper in Optica.

The modulator could be used in conjunction with a nanocavity in creating a photonic chip at the nanoscale.

Other coauthors on the modulator project are postdoctoral associate Yang He ’20 (PhD) and graduate students Jingwei Ling ’18 (MS), Usman Javid, and Shixin Xue of Lin’s lab.

The project was supported with funding from the National Science Foundation, Defense Threat Reduction Agency, and Defense Advanced Research Projects Agency (DARPA); fabrication of the device was done in part at the Cornell NanoScale Facility.