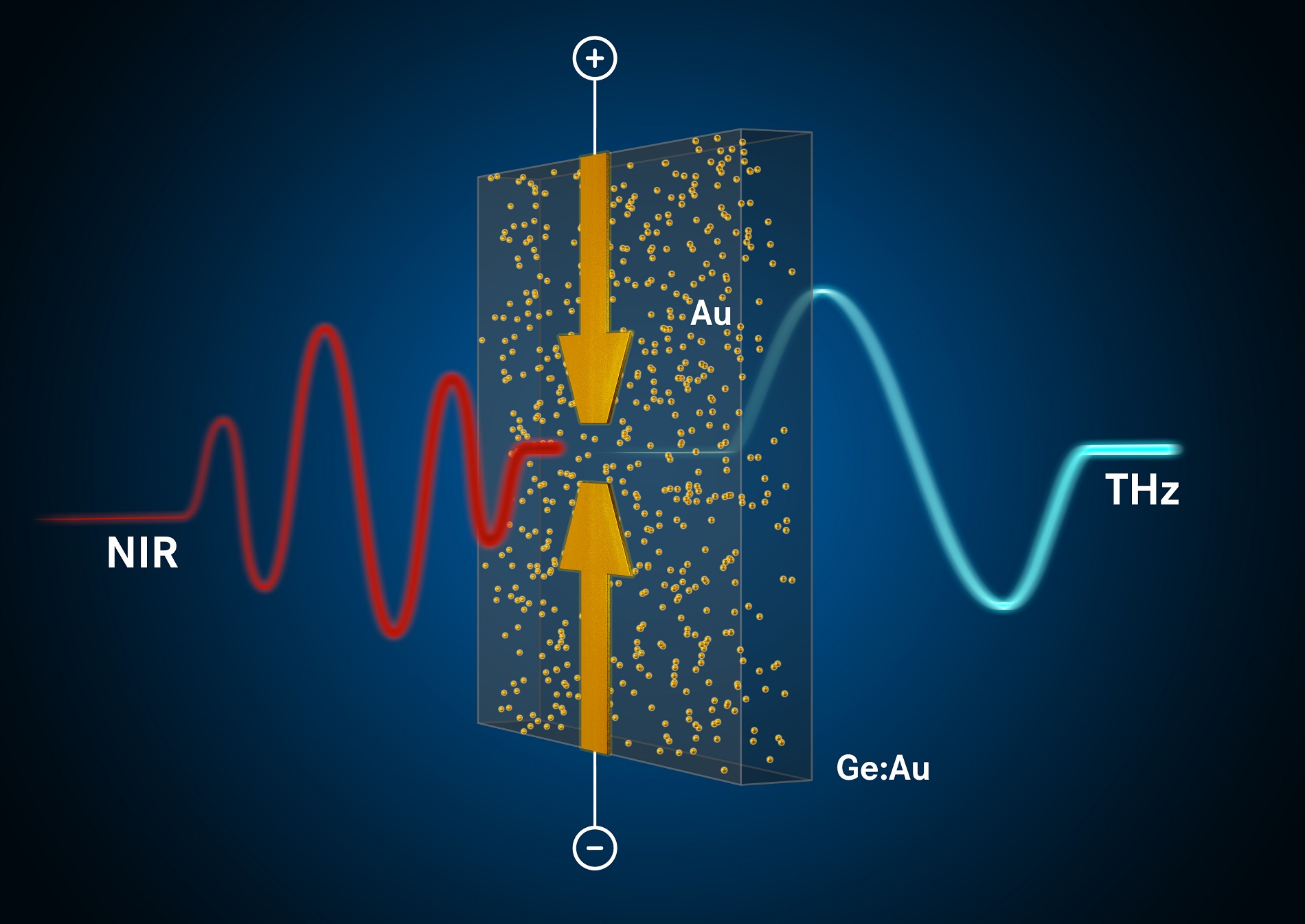 Terahertz waves are becoming ever more important in science and technology. They enable us to unravel the properties of future materials, test the quality of automotive paint and screen envelopes. But generating these waves is still a challenge. A team at Helmholtz-Zentrum Dresden-Rossendorf (HZDR), TU Dresden and the University of Konstanz has now made significant progress. The researchers have developed a germanium component that generates short terahertz pulses with an advantageous property: the pulses have an extreme broadband spectrum and thus deliver many different terahertz frequencies at the same time. As it has been possible to manufacture the component employing methods already used in the semiconductor industry, the development promises a broad range of applications in research and technology, as the team reports in the journal Light: Science & Applications (DOI: 10.1038/s41377-020-0265-4).

Just like light, terahertz waves are categorized as electromagnetic radiation. In the spectrum, they fall right between microwaves and infrared radiation. But while microwaves and infrared radiation have long since entered our everyday lives, terahertz waves are only just beginning to be used. The reason is that experts have only been able to construct reasonably acceptable sources for terahertz waves since the beginning of the 2000s. But these transmitters are still not perfect – they are relatively large and expensive, and the radiation they emit does not always have the desired properties.

One of the established generation methods is based on a gallium-arsenide crystal. If this semiconductor crystal is irradiated with short laser pulses, gallium arsenide charge carriers are formed. These charges are accelerated by applying voltage which enforces the generation of a terahertz wave – basically the same mechanism as in a VHF transmitter mast where moving charges produce radio waves.

However, this method has a number of drawbacks: “It can only be operated with relatively expensive special lasers,” explains HZDR physicist Dr. Harald Schneider. “With standard lasers of the type we use for fiber-optic communications, it doesn’t work.” Another shortcoming is that gallium-arsenide crystals only deliver relatively narrowband terahertz pulses and thus a restricted frequency range – which significantly limits the application area.

That is why Schneider and his team are placing their bets on another material – the semiconductor germanium. “With germanium we can use less expensive lasers known as fiber lasers,” says Schneider. “Besides, germanium crystals are very transparent and thus facilitate the emission of very broadband pulses.” But, so far, they have had a problem: If you irradiate pure germanium with a short laser pulse, it takes several microseconds before the electrical charge in the semiconductor disappears. Only then can the crystal absorb the next laser pulse. Today's lasers, however, can fire off their pulses at intervals of a few dozen nanoseconds - a sequence of shots far too fast for germanium.

In order to overcome this difficulty, experts searched for a way of making the electrical charges in the germanium vanish more quickly. And they found the answer in a prominent precious metal – gold. “We used an ion accelerator to shoot gold atoms into a germanium crystal,” explains Schneider’s colleague, Dr. Abhishek Singh. “The gold penetrated the crystal to a depth of 100 nanometers.” The scientists then heated the crystal for several hours at 900 degrees Celsius. The heat treatment ensured the gold atoms were evenly distributed in the germanium crystal.

Success kicked in when the team illuminated the peppered germanium with ultrashort laser pulses: instead of hanging around in the crystal for several microseconds, the electrical charge carriers disappeared again in under two nanoseconds – about thousand times faster than before. Figuratively speaking, the gold works like a trap, helping to catch and neutralize the charges. “Now the germanium crystal can be bombarded with laser pulses at a high repetition rate and still function,” Singh is pleased to report.

The new method facilitates terahertz pulses with an extremely broad bandwidth: instead of 7 terahertz using the established gallium-arsenide technique, it is now ten times greater – 70 terahertz. “We get a broad, continuous, gapless spectrum in one fell swoop”, Harald Schneider enthuses. “This means we have a really versatile source at hand that can be used for the most diverse applications.” Another benefit is that, effectively, germanium components can be processed with the same technology that is used for microchips. “Unlike gallium arsenide, germanium is silicon compatible,” Schneider notes. “And as the new components can be operated together with standard fiber-optic lasers, you could make the technology fairly compact and inexpensive.”

This should turn gold-doped germanium into an interesting option not just for scientific applications, such as the detailed analysis of innovative two-dimensional materials such as graphene, but also for applications in medicine and environmental technology. One could imagine sensors, for instance, that trace certain gases in the atmosphere by means of their terahertz spectrum. Today’s terahertz sources are still too expensive for the purpose. The new methods, developed in Dresden-Rossendorf, could help to make environmental sensors like this much cheaper in the future.