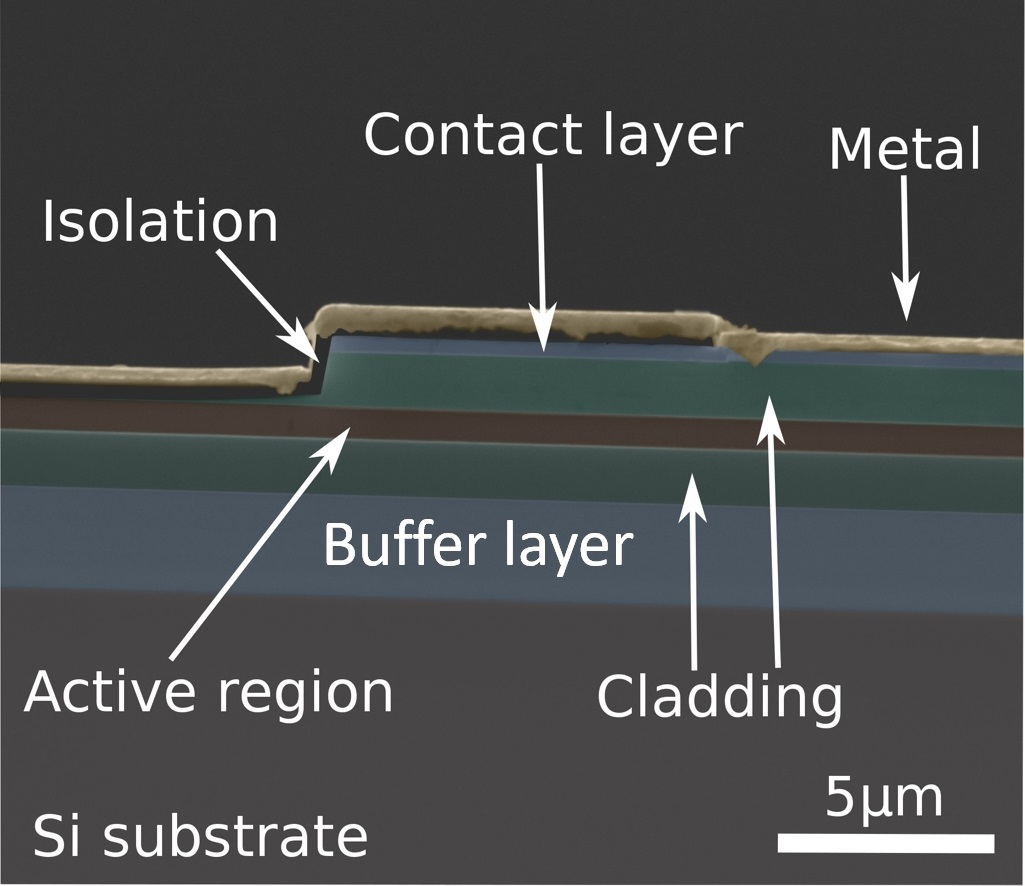 Researchers have fabricated the first set of mid-infrared laser diodes directly on microelectronics-compatible silicon substrates. The image on the bottom shows the various layers of the laser in a close-up of the section marked in the top image. Credit: Eric Tournié, University of Montpellier

“Most optical chemical sensors are based on the interaction between the molecule of interest and mid-infrared light,” said research team leader Eric Tournié from the University of Montpellier in France. “Fabricating mid-infrared lasers on microelectronics-compatible silicon can greatly reduce their cost because they can be made using the same high-volume processing techniques used to make the silicon microelectronics that power cell phones and computers.”

The new fabrication approach is described in Optica, The Optical Society's (OSA) journal for high impact research. The work was conducted at the EXTRA facilities and as part of the REDFINCH consortium, which is developing miniaturized, portable low-cost optical sensors for chemical detection in both gases and liquids.

“For this project, we are working upstream by developing photonic devices for future sensors,” said Tournié. “At a later stage, these new mid-infrared lasers could be combined with silicon photonics components to create smart, integrated photonic sensors.”

Although the researchers previously demonstrated lasers on silicon substrates, those substrates were not compatible with industry standards for microelectronics fabrication. When using industry-compatible silicon, differences in the material structures of the silicon and the III-V semiconductor cause defects to form.

“A particular defect called an anti-phase boundary is a device killer because it creates short-circuits,” said Tournié. “In this new work, we developed an epitaxial approach that prevents these defects from reaching the active part of a device.”

The researchers also improved the process used to fabricate the laser diode from the epitaxial material. As a result, they were able to create an entire laser structure on an industry-compatible silicon substrate with a single run of an epitaxial tool.

The researchers demonstrated the new approach by producing mid-infrared laser diodes that operated in continuous-wave mode and exhibited low optical losses. They now plan to study the lifetime of the new devices and how that lifetime relates to the fabrication and operation mode of the devices.

They say that once their method is fully mature, epitaxy of lasers on large silicon substrates (up to 300 millimeters across) using silicon microelectronics tools will improve control of the fabrication process. This will, in turn, further reduce laser fabrication costs and enable the design of new devices. The new lasers could also be combined with passive silicon photonics integrated circuits or CMOS technology to create small, low cost, smart photonic sensors for gas and liquid measurements with high sensitivity.

“The semiconductor material we work with allows fabrication of lasers or photodetectors operating in a broad spectral range, from 1.5 microns (telecom band) to 25 microns (far infrared),” said Tournié. “Our fabrication method can be applied in any field where one needs to integrate III-V semiconductors on silicon platforms. For example, we have already fabricated quantum-cascade lasers emitting at 8 microns by applying this new epitaxial approach.”