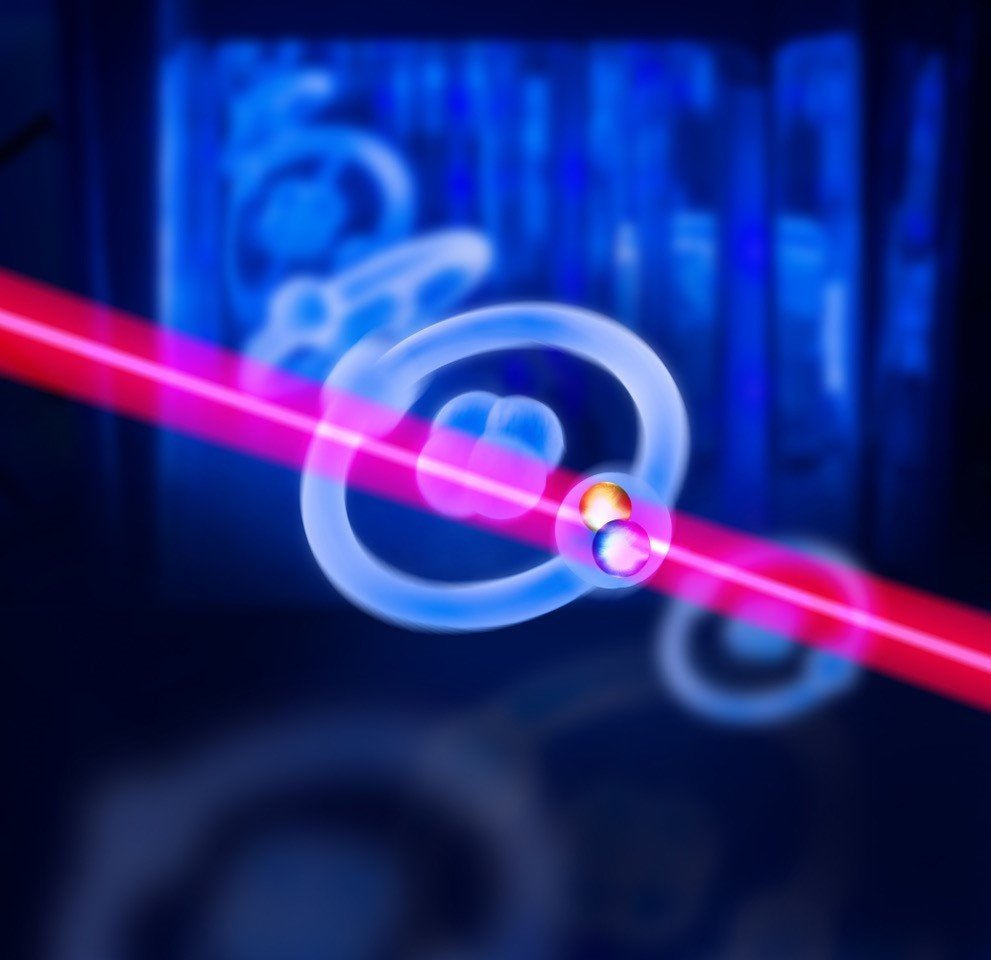 Exotic atoms, in which electrons are replaced by other subatomic particles of the same charge, allow deep insights into the quantum world. After eight years of ongoing research, a group led by Masaki Hori who is a senior physicist at the Max Planck Institute of Quantum Optics in Garching, Germany, now succeeded in a challenging experiment: in a helium atom they replaced an electron with a pion in a specific quantum state and verified the existence of this long-lived “pionic helium” for the very first time. The usually short-lived pion could thereby live a thousand times longer than it normally would in other varieties of matter. Pions belong to an important family of particles that determine the stability and decay of atomic nuclei. The pionic helium atom now enables scientists to study pions in an extremely precise manner with the means of laser spectroscopy. The research is published in this week’s edition of Nature.

From left to right: A pion (p) meets a helium atom and replaces one of its two electrons. The result is a pionic helium (pHe+) atom in which the pion lives a thousand times longer when being in a special quantum states than in other varieties of pionic atoms. The crucial point in the experiment was the proof of the existence of such an atom. For this proof, a resonant laser beam causes the pion to jump from its quantum orbit into another orbit that leads to its absorption by the helium nucleus. This causes the breakup of the nucleus which can be detected.

For eight years, the group worked on this challenging pioneering experiment that has the potential to establish a new field of research. It was a scientific marathon, made possible by an international cooperation between the Max Planck Institute of Quantum Optics, the Paul Scherrer Institute (PSI) in Switzerland, and CERN, the European Laboratory for Particle Physics.

The team’s success was to experimentally demonstrate for the first time that long-lived pionic helium atoms really exists. The helium atom was “infected” by a pion so to speak which replaces one of the two electrons of the helium atom. “It is a form of chemical reaction that happens automatically”, explains Hori. The exotic atom had already been theoretically predicted in 1964 after some experiments at that time pointed towards its existence. However, it was considered extremely difficult to verify this prediction experimentally. Usually, in an atom, the extremely short-lived pion decays even sooner. However, in pionic helium, it can be conserved in a sense so it lives a thousand times longer than it normally does in other atoms.

The challenge the team struggled with for eight years was proving that such a pionic helium atom exists in their experiment’s tank. The tank was filled with extremely cold, superfluid helium. In the helium atom, the pion behaves like a very heavy electron. It can only jump between discrete quantum states, like on steps on a ladder. The team had to find a long-lived state and a very special quantum leap which they could excite with a laser and which would kick the pion into the helium nucleus and destroy the atom. Then the team could detect the debris from the breakup of the nucleus as a “smoking gun” (see figure). However, the theoreticians couldn’t exactly predict at which light wavelength the quantum leap would occur. So the team had to install three complex laser systems one after the other until they were successful.

"This success opens up completely new ways to investigate pions with the methods of quantum optics," Hori rejoices. Part of these methods is laser spectroscopy, one of the most precise tools in physics. Pions in these quantum states can thus be studied with much more precision than ever before. 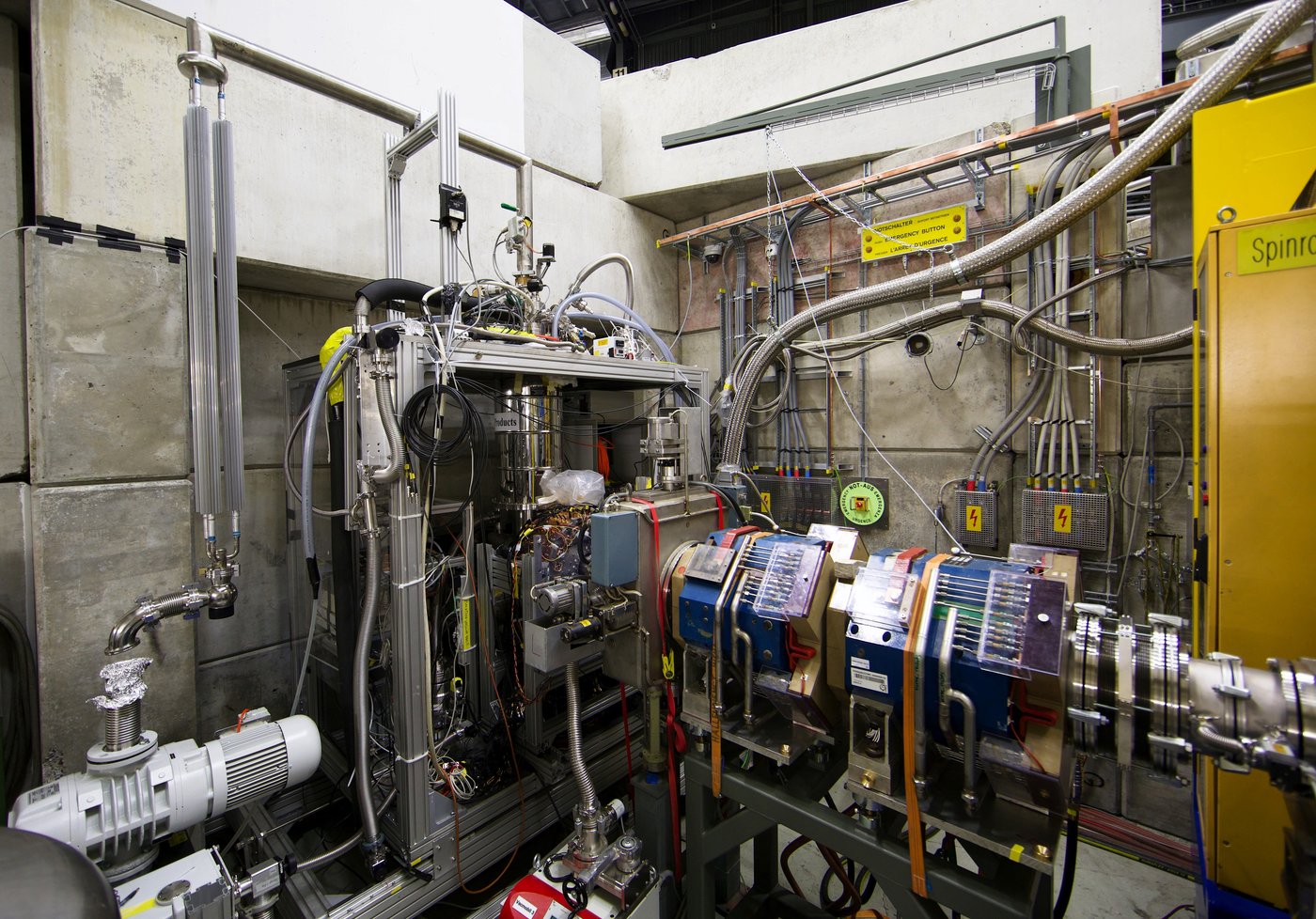 Experimental apparatus used to produce and detect pionic helium atoms. Pions enter from the right side, laser beam from the left side
Masaki Hori

A new window into the quantum cosmos

The pion belongs to the particle family of the so-called mesons. Mesons mediate the strong force between the building blocks of atomic nuclei, the neutrons, and protons. Although protons with the same electrical charge repel each other violently, the stronger nuclear force binds them together to form the atomic nucleus. Without this force, our world would not exist. Mesons are fundamentally different from protons and neutrons, which are each made up of three quarks, whereas mesons consist of only two quarks.

The experiment used the most powerful pion source in the world, located at PSI. Since the risk of failure was very high and there were numerous failures along the way, the group needed long-term support from PSI and the Max Planck Society (MPG). The PSI provided beam time with pions, the technical groups of CERN provided an important part of the equipment, and the MPG provided a long-date research enabling environment. The project was financed by an ERC grant (European Research Council).

Dr Hori hopes that his research has opened a new window into the quantum cosmos of particles and forces.