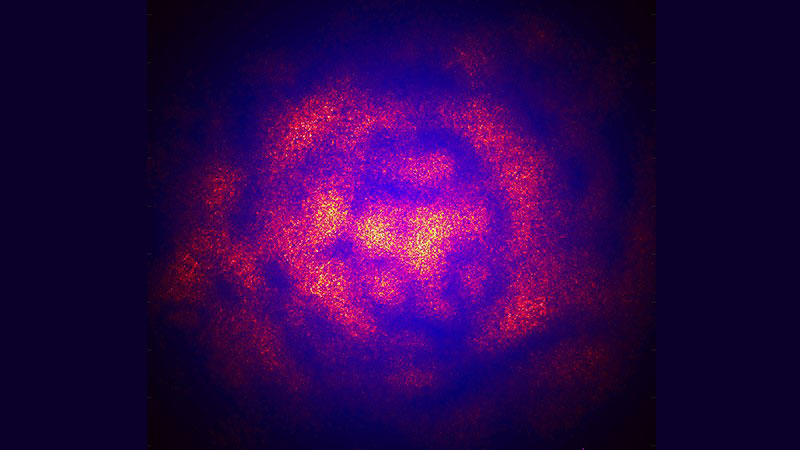 Heriot-Watt and Glasgow scientists have solved a basic problem that has been holding up advances in quantum technology: they have transported entangled light particles through a complex medium.

Albert Einstein described quantum entanglement as “spooky action at distance”. It’s when two quantum particles are inextricably linked: one particle behaves in the exact same manner as the other, even if they are miles apart.

To take a metaphorical example, a pair of entangled figure skaters would always spin and twirl in the same way, even if skating on different continents.

Quantum entanglement plays a central role in the technologies that are transforming our world, from ultra-secure cryptography to quantum computing and communications.

The phenomenon helps scientists harness quantum mechanics to achieve feats that are out of the reach of classical physics.

Recent advances have meant scientists can precisely manipulate normal light to look through biological tissue or to send entire images down optical fibres as thin as a human hair.

Extending these advances to quantum light has been difficult, because entanglement is usually lost when particles of light enter a complex medium, which is anything that scatters or “scrambles” the light, like travelling through thick fog or bouncing around inside a multi-mode optical fibre.

The result is what Dr Mehul Malik from Heriot-Watt's Institute of Photonic and Quantum Sciences,calls “gibberish”.

He has solved this problem with colleagues from the University of Glasgow, as reported in the journal Nature Physics.

The Heriot-Watt and Glasgow team achieved this by using another mysterious feature of quantum mechanics, which states that entangled particles and the medium they travel through can be thought of as one and the same.

Dr Malik said: “We’ve made use of a unique property in quantum physics that allows one to map the entire medium onto the quantum state travelling through it.

“In other words, the scrambled entangled state captures an ‘image’ of the complex medium, which tells us exactly how to reverse the scattering process inside it.

"We usually consider loss of entanglement a problem, but here it has provided us with the solution—information about how the light was scrambled and a way to fix it.”

The spookiness of entanglement allows for yet another baffling solution: the unscrambling can be performed without ever touching the complex medium or the particle of light that enters it.

Instead, the scientists carefully scramble the entangled partner that remains outside, allowing them to regain the entanglement that was lost.

Dr Hugo Defienne, from the University of Glasgow, was a co-author of the study. Dr Defienne said: “This is really exciting as it allows us to render the medium completely transparent to entanglement without ever having to manipulate the particles of light entering it.”

The team says the results have immediate implications for quantum technologies, such as the development of a secure quantum internet and super-sensitive imaging techniques.